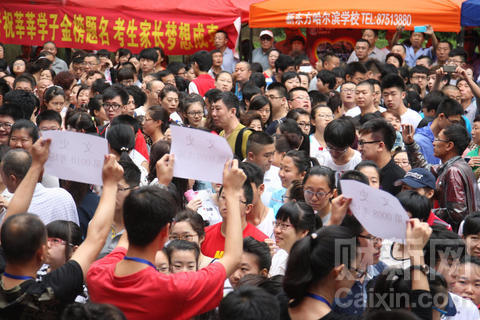 (Beijing) — The Education Ministry said on December 16 it would introduce a new student assessment system to supplement the national college entrance exam, as a way to reform the country's test-centric approach to education.

The ministry provided details for a plan it announced on September 3 in which it vowed to reduce the weight that the "gaokao," the annual national college entrance exam taken every June, carries for university enrollment.

Under the reform plan, the university admissions process will also include evaluations of a student's performance in tests taken during the three years of high school. Students can choose three subjects to be tested on from among a range of fields, including politics, history, geography, physics, chemistry and biology.

The December 16 document made clear that provincial authorities should organize tests for all subjects students take in high schools and allow then to choose any of the subjects as part of the college enrollment assessment. It also required provincial governments to set up professional teams to handle specific exam topics.

The document also outlined the grading system for the tests and asked local authorities to work out detailed evaluation standards.

Shanghai and the eastern province of Zhejiang have been running pilot programs and submitted detailed reform arrangements this year. Other provinces and municipalities are required to hand in their plans by August 2015.

The gaokao has been criticized for playing an oversized role in determining students' futures while restricting their development in other areas because most are pressed to focus on subjects that will be on the test as soon as they start high school.

The latest reform plan is aimed at creating a more balanced assessment mechanism and providing more flexibility for students to pursue their own interests during high school. However, some education experts expressed concern with how the changes will be implemented.

Cheng Fangping, an education professor at Renmin University in Beijing, said he is worried about the quality of tests and possible irregularities at the local level. The gaokao has set up a mature testing mechanism and is closely scrutinized, he said, but the new tests will be organized by provincial education authorities. "If it isn't handled properly, there will be larger risks," he said.

Cheng suggested that students should be asked to choose their three tests during their second year in high school in order to leave enough time for them to figure out what they are interested in.

The ministry also asked schools to stop ranking students according to exam scores, and required local education authorities not to assess schools and teachers based on test performance.

An education expert who involved in the design of the pilot in Shanghai said that the new measures will help schools switch from the exam-centric mindset to a more flexible system, but it still "take time for both the schools and students to prepare."

Xiong Bingqi, deputy director of the 21st Century Education Research Institute, said that without granting freedom to colleges to evaluate applicants in their own way and allow students to choose colleges more freely, the new arrangement will not change much.

If colleges continue enroll students based on overall scores from all these tests, the new system will be little different from the gaokao system, he said.

"The real problem is that the government is still hesitant to give up its power over the education system, from school operations to exams and enrollment," Xiong said. "If colleges can't establish their own applicant evaluation system based on their needs, in which student's high school credits, graduation exam scores and enrollment interview performance are all taken into consideration, the goodwill of the current reform plans will not matter."