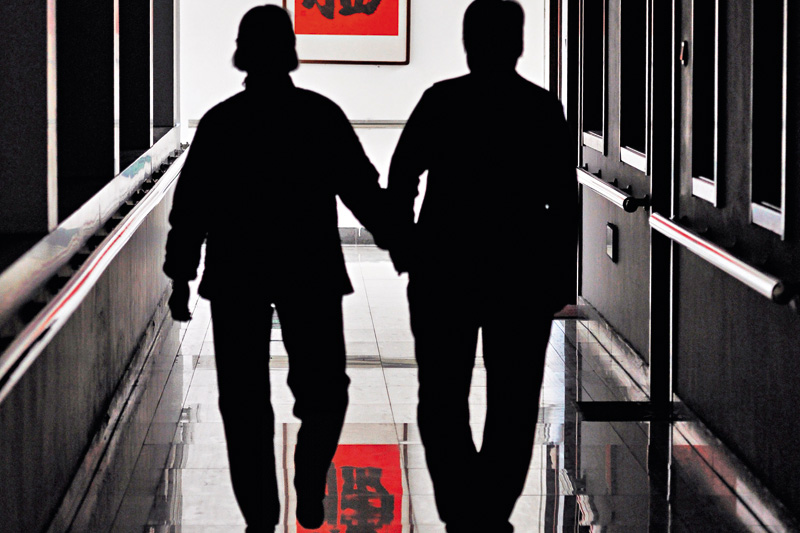 (Beijing) – About 8,000 teachers in the northeastern city of Zhaodong stayed home for three days in November to protest an experimental pension scheme they called tantamount to a pay cut.

The teachers claimed they'd been illegally forced to participate in the scheme, and demanded the local government refund their pension contributions.

The dispute in Zhaodong, an agricultural hub in Heilongjiang Province, is a snapshot of a nationwide debate over the future of China's two-tier pension system. Analysts say Zhaodong's experiment failed because it reinforced the wide gap separating pension payment and benefit outlays for teachers and local civil servants.

A similar gap is at the heart of the nationwide debate over how to run a fair pension system in a country with about 226 million retirees and 837 million people contributing to the pension fund. Critics of the pension system have long argued it's built on a policy that gives special privileges to civil servants and other types of public sector workers. But revamping the system has been tried before, without success.

Employees of private enterprises and other groups, such as Zhaodong's teachers, have bristled at the discrepancies. On the other hand, the friction generated by the uneven pension system has been blamed for holding up implementing reforms.

Once again the central government is moving to address the problem. A State Council plan unveiled in December is aimed at developing a unified pension scheme covering public- and private-sector employees. Supporters call the plan a major step toward a more equitable system.

Whether the cabinet's plan works is likely to hinge on how local governments choose to replenish cash-strapped pension funds, and whether policymakers will themselves accept the limits they set for other groups of workers.

The Standing Committee of the National People's Congress (NPC) on December 23 discussed streamlining the pension system for urban and rural residents. Vice Premier Ma Kai said the Ministry of Human Resources and Social Security has worked out a plan for a unified pension system covering government and private-sector employees.

Ma gave no details of the plan, and officials have not discussed a possible timetable for implementation. But some academics have shed light on the plan's general thrust. Hu Jiye, a professor at the Center for Law and Economics at the China University of Political Science and Law, said the plan calls for treating all workers equally.

And the vice minister of the human resources agency, Hu Xiaoyi, said the new scheme will likely "start with setting a direction and moving things along gradually to weed out discrepancies in the pension system."

Under the country's earlier version of a planned economy, urban workers in the public and private sectors were covered by a single social security plan that included pension payments. But civil servants had an advantage because their payments were entirely covered by the state, while payments for the rest of the country's workers were deducted from their wages.

The system began to unravel in the 1980s when the economy started changing, prompting layoffs and shutdowns at outdated state companies and a variety of private businesses.

Introduced in the early 1990s was a pension fund for private-sector employees such as factory workers. Under the plan, workers had to contribute 28 percent of their base salary to the pension fund.

Meanwhile, civil servants and other public-sector workers such as doctors and teachers were not required to pay into the fund but could receive state pension benefits after retiring.

China had nearly 7.2 million civil servants and more than 31.5 million public-sector workers employed by institutions such as schools and hospitals at the end of 2013, the State Administration of Civil Service says.

Retired government employees received an average 1,367 yuan a month in pension payments in 2005, or almost twice the amount paid to former factory workers, according to that year's China Statistical Yearbook. By 2011, the average government pension had climbed to 2,175 yuan a month per retired civil servant and 1,508 monthly for a counterpart in the private sector.

Under a separate pension plan for retired rural workers and unemployed urbanites, however, payments averaged only 90 yuan per month in 2011, the latest year for which data is available.

December's decision by the cabinet to start closing the pension gap came amid rising resistance to an idea academics have floated for years: They want the government to raise the retirement age for men to 65 from the current 60. The retirement age for women would go up from 50 to 60.

In the opinion of these academics, raising the age of pension eligibility is the best way to take pressure off the financially strained pension system – pressure that's building as the population rapidly ages.

Raising the retirement age, however, could create new problems for workers in their 50s and 60s who may be less employable than younger men and women. Indeed, an academic who helped draft the State Council proposal says policymakers have decided against changing the retirement age for fear that it could spark social friction.

A human resources ministry official who asked not to be named said the push for a single, all-sectors pension system is getting strong support under the leadership of President Xi Jinping, who is more resolved than ever to usher in a balanced system.

The pension system has long been a sensitive topic in China. Against a backdrop of rising public discord over a system that favored retired civil servants, the central government introduced a pilot reform plan in 1997. These reforms quickly ran aground due to resistance from government employees who feared their pension benefits would be cut.

A second attempt at reform in 2006 targeted people in the public sector, such as school and hospital employees. But it ended in a fiasco because regional governments lacked the funds needed to support the improvements.

The pension system is already beset by legacy costs of the central government's original pension system, which was introduced in 1991. That system has and still does provide regular payments to elderly retirees who made few if any contributions during their working years.

A study released in June by Wei Jizhang, a research fellow in social security studies at the Chinese Academy of Social Sciences, said China's pension fund was 86 trillion yuan in the red at the end of 2012.

A separate study released in 2013 by Nie Rimin, a finance professor at the Shanghai Institute of Finance and Law, said 8.2 trillion yuan will have to be injected into the pension fund to compensate current government and other public sector retirees and those who will retire in the next 30 years.

Another issue that the new pension system plan may address revolves around the concerns of government workers over a possible gap between their future payments and payments for those currently retired.

Zhu Lijia, a professor at the Chinese Academy of Governance, said that fears that under the latest proposal future retirement benefits will be cut from today's levels has sparked a rush for the door by some teachers and doctors. These days many of these professionals, Zhu said, are filing for early retirement.