Who Deserves the Rap for Shanghai Death Trap? 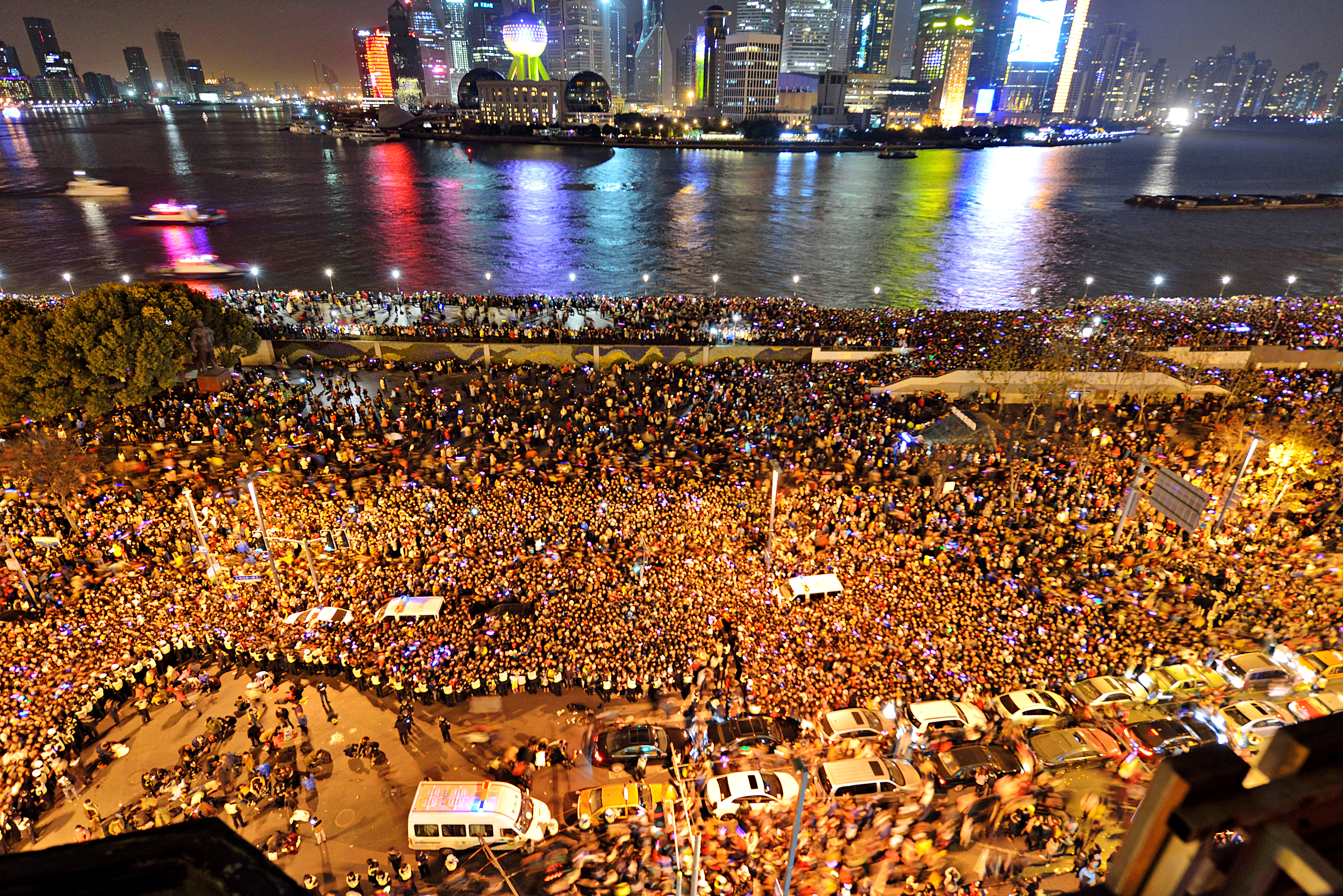 (Beijing) – Pre-holiday planning by Shanghai officials in charge of public security and publicity are getting close scrutiny in the wake of a New Year's Eve tragedy that killed dozens of people on the Bund.

Until now, Shanghai officials have repeatedly blamed the "public gathering on the Bund" and "overcrowding" for the 36 body-crush-related deaths and 49 injuries on and around a concrete staircase that links the street-level plaza and a Huangpu River overlook.

Exactly what happened has yet to be officially clarified, and officials haven't said how many people were on the Bund that night. Initial reports about a stampede over "fake money" raining down from a nearby building into the crowd, however, are no longer being mentioned by state media.

Officials hope to have a clearer picture by late February. The incident is the focus of an investigation led by Deputy Mayor Tu Guangshao, whose probe was ordered by Communist Party chief for Shanghai, Han Zhen, a week after the tragedy.

Nevertheless, details and eyewitness reports have emerged that suggest the tragedy may have been avoided if not for possible missteps by city administrators.

Central government leaders have been paying close attention since January 6, when Vice Premier Ma Kai spoke at a national conference on work safety of an "extremely adverse social impact" from the Shanghai incident.

"Even if no event has been organized," Du wrote, "local authorities still bear responsibility for public security.

A 2009 State Council regulation spelling out public officials' responsibilities says a local official can be held accountable if an incident that causes public harm is linked to dereliction of duty or a lack of supervision on his or her part.

Most of the thousands who packed onto the Bund – a 2 kilometer pedestrian plaza and road along the Huangpu's west bank in downtown Shanghai – crowded on Chen Yi Square and the nearby overlook in hopes of ringing in the new year with a city-sponsored light show.

The Bund's celebration last year attracted about 300,000 people who were treated to a spectacle of lights dancing on the facades of old bank buildings.

Apparently, few if any of the mainly young people who poured into Chen Yi Square for the event were aware that the show had been canceled.

The throng started swelling at 8 p.m. and grew through the evening until about 30 minutes before midnight, when panic struck in a pocket of the crowd.

A Fudan University student who witnessed the tragedy told Caixin that by 10 p.m. people had filled the entire square. The few police officers on hand tried but failed to control the crowd by restricting access to two staircases leading to the overlook.

The Huangpu District Public Security Bureau said all of the victims were in a panic-stricken mass of people trying to walk down and up a walled-in, 5 meter wide, 17-step staircase on the south side of the Chen Yi Square, leading to the overlook.

The scene on the streets was more orderly. Traffic police managed crowds at intersections and along the road that parallels the pedestrian plaza, according to a university student who witnessed the incident.

The security task was not easy, the student said, because by 10 p.m. crowds had filled the sidewalks as well as the plaza, and area roads were jammed with traffic. Contributing to the size of the crowd was a decision by city officials to leave roads and subway stations in the Bund area open, even though they had been closed in past years.

Many people standing on the plaza in the human throng, including the student, were unable to move unless the crowd itself started moving. Even then, they could only follow the flow.

The overlook was the scene of what was probably the densest cluster of people on the Bund that fateful night. One witness said a woman in the crowd fainted at around 11:30 p.m., at around the time that others started trying to leave the overlook by walking down the south staircase. At the same time, though, more people were trying to climb the stairs.

Four police officers on duty at the staircase tried in vain to control the crowd, according to video footage shot by a city surveillance camera. That's when some panicked, and the crushing began.

A young woman who gave her name as Xiao Ping said she was standing on the staircase when the crowd got out of control. "The police told people to turn back, but those at the top of the stairs started to push forward, and people on the steps below couldn't restrain them," she said.

Others in the throng were not as fortunate. "I could only go where the crowd went," said a college student who was on the staircase. He said he watched helplessly as people lost their balance and fell under the bodies of others.

One woman who is trained in first aid and arrived shortly after the panic said she saw many injured victims lying on the ground, including some "in bad shape."

"They were young," said the woman, who asked not to be named. "One girl was vomiting blood and others were unconscious. One had stopped breathing and had no heartbeat."

It was a chaotic scene until the first ambulance arrived about 20 minutes later. Authorities tried bringing a bus to the scene to take away the injured, but the driver was forced to crawl through the mass of people.

Officials say most of the dead were young, and many were university students. The youngest fatality was a 12-year-old boy.

Among the dead were Chen Wei, a Malaysian man studying at Zhejiang University in the eastern city of Hangzhou. Other victims included a Fudan University student named Du Yijun, and Mei Hechun, who worked for a Shanghai real estate agency.

The city government cancelled the New Year's Eve light show long before people started packing into the Bund area. But mixed messages about the cancellation apparently confused the public.

The Shanghai Public Security Bureau decided in November to cancel the event, which had been held in each of the previous three years. They cited fears that the crowd could not be properly managed.

Meanwhile, city officials gave tacit approval to plans for a private light show near the Bund at a nearby commercial compound called Bund Origin, or Waitanyuan. Up to 2,000 tickets were to be available.

Because of the public show's cancellation, according to an official in the city's emergency planning department, the city's security officials decided to reduce the number of police officers assigned to the Bund.

In past years, the official said, the Shanghai security bureau sent more than 500 officers to supplement the forces of police from several Shanghai districts. Last year, some 4,000 officers controlled traffic around the Bund, while subway stations were closed and river ferries were idled to limit crowds.

As a result, city officials told Caixin, altogether 370 police officers and 120 armed public security officers were patrolling the Bund area this year. But some initially assigned to the area were later told to stay out to avoid the traffic jam.

At public gatherings in the United States, one security guard or police officer is supposed to be present for every 250 people in an audience, according to Paul Wertheimer, who runs a consulting firm in Los Angeles called Crowd Management Strategies. New York assigned more than 10,000 officers to the annual New Year's Eve countdown on Times Square.

Some Shanghai-area Internet news portals and Sina Weibo accounts were used to notify the public that the free show was cancelled. But many people apparently missed the notice.

On December 23, a Shanghai news portal called Xinmin reported that "the Bund light show will not be held this year." And a local non-government transportation organization called the Shanghai Metro Fun Club said on its Weibo account that people should consider staying away from the Bund area on New Year's Eve to avoid the crowds.

However, the local Shanghai Morning Post said on December 25 that according to Huangpu District government officials "it has not been confirmed yet whether the New Year's Eve event at the Bund will be cancelled." The district includes the Bund.

That same day, the Dongfang Daily newspaper reported the light show would be held at Bund Origin. But it did not clearly explain the difference between previous light shows and the new plan for a spectacle at Bund Origin.

At 11 a.m. on December 30, the Shanghai government sought to clear the air by announcing on its Weibo account that "a light show will be held tomorrow at Bund Origin." But the posting, which included few details, may have sown more even confusion.

One Shanghai resident said that most news reports in the run-up to New Year's Eve described features of the Bund Origin new light without mentioning the venue or the fact that the program was closed to the public. Some people did not realize what had happened until after they arrived at the Bund.

Public security cameras show the crowd began forming at about 8 p.m., and it was soon clear that the event – which had been cancelled weeks earlier – would likely attract as many people as in previous years.

A Weibo posting by the Shanghai Metro Fun Club at about 11 p.m. warned people to stay away from the area.

"The Bund light show has been cancelled for this year, so roads have not been closed," it said. "Many people are still going into the area, and this has led to overcrowding."

Some experts fault Shanghai officials for failing to properly inform the public about the cancellation.

Li Yanhong, a communications professor at Sun Yat-sen University in the southern city of Guangzhou, said officials failed to reach the public because they relied too heavily on social media and failed to get the word out through other media outlets.

Rob Harris, a professor and event management expert at the Australian Centre for Event Management, told Caixin that informing the public is a crucial factor when organizing large-scale, public gatherings.

Harris said that in Sydney, where a New Year Eve's fireworks show attracts more than 1.2 million visitors to the harbor area, authorities use various media platforms and a mobile phone applications to give the public information about the program schedule, updates on crowd flow and, if necessary, safety warnings.