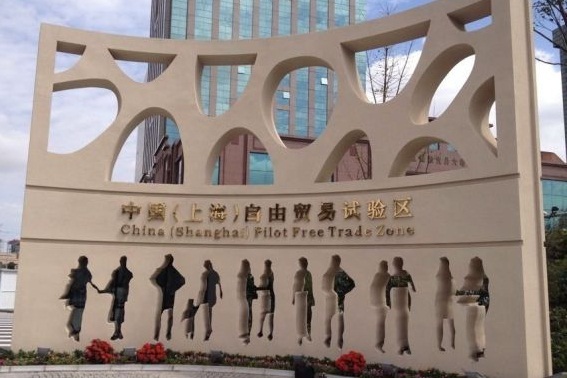 (Beijing) – More than one year after the launch of the Shanghai Free-Trade Zone, China has decided to expand the experiment by enlarging its area and setting up new versions in Guangdong, Fujian and Tianjin.

The 29 square kilometer zone in Shanghai was the country's first attempt at setting up an FTZ open to the entire outside world. Previously, the country mainly relied on free-trade agreements under a World Trade Organization framework to cooperate with certain countries and regions.

Since the zone was launched in September 2013, it has become an important aspect of China's plan to enhance international trade and investment, and boost the domestic financial service sector. It is also been a testing ground for long-anticipated financial reforms.

Plans to launch more FTZs in the southern province of Guangdong, the eastern province of Fujian and the northern port city of Tianjin were approved by the country's legislature in December. Experts say the new zones, based on economic hubs in the Pearl River Delta, Yangtze River Delta and Bohai region, respectively, will supplement the Shanghai FTZ and reflect the central government's desire to provide more policy support to the coastal region to deepen reforms.

Market participants and experts are waiting to see what new policies will be introduced in the new FTZs. The general plans for the three new zones have undergone many revisions in terms of location, area and even names, sources close to the matter say.

The plans for the zones have almost been settled, and each has different features according to its geographic advantage, the sources said. However, the pilot measures for capital account liberalization applied to the Shanghai FTZ will not immediately be expanded to other regions.

Feng Xiaoyun, economics professor at Jinan University in Guangzhou, said the Guangdong FTZ is being positioned to further enhance the province's cooperation with Hong Kong and Macau, and serve as a hub for a central government initiative called the 21st Century Maritime Silk Road, which is intended to connect China with Southeast Asian countries, Africa and Europe.

Ji Gang, strategic consulting director at global accounting firm PricewaterhouseCoopers, said the Fujian FTZ will use its close links with Taiwan to develop cross-strait trade and economic partnerships, and it will focus on producer services and high-end service sectors.

In the north, Tianjin's port handles four-fifths of the containers that come and go from northern China. Its FTZ is expected to play an important role in boosting economic integration of the region encompassing Beijing, Tianjin and Hebei Province, and coordinate with an expected free-trade agreement involving China and South Korea, said Liu Enzhuan, who directs a research institute for the zone and is also participated in drafting plans for it.

A researcher close to the Shanghai FTZ said the four zones are expected to compete with each other, and their ability to win supporting policies from Beijing will depend on the abilities of the respective local governments. Companies have a lot of options, and local officials will have to work to attract them, Liu said.

"Reform is just like the market, where competition means efficiency," he said.

What's In a Name?

On December 28, the National People's Congress' Standing Committee, which runs the legislature between its full annual sessions, confirmed the three FTZs had been approved and the Shanghai zone is being expanded to 120.7 square kilometers. The three new versions are expected to open by March 1.

There has long been speculation the FTZs were on the way. An official in Guangdong said the province started studies on a zone in June 2013. The provincial government asked authorities in Guangzhou, Shenzhen and Zhuhai to jointly study a plan to set up an FTZ in the province, and negotiations with the Ministry of Commerce started in December, the official said.

Early last year, Guangdong sent its plan to 23 central government departments and collected their feedback so it could make revisions. Guangdong's governor, Zhu Xiaodan, said in April that an FTZ proposal had won support from top leaders and would be submitted to the State Council for approval soon.

The initial plan would have named the area the Guangdong-Hong Kong-Macau Free Trade Zone, but that was opposed by scholars including Feng because Closer Economic Partnership Arrangements (CEPA) that link the mainland, Hong Kong and Macau have provided Guangdong many preferential policies.

Feng said a new name was agreed upon in June: the Guangdong Free Trade Zone. The change was negotiated with both the central government and the WTO, and Guangdong made it clear that the plan is to set up a new FTZ, not create another FTA between Guangdong, Hong Kong and Macau.

The Guangdong FTZ will cover around 120 square kilometers in the Nansha District of Guangzhou, the Qianhai District in Shenzhen and the Hengqin District in Zhuhai. However, compared with the Shanghai FTZ, the business environment in these regions is still at a young stage.

The Guangdong official said a special agency will be set up to manage the zone, but details have not been released.

Liu Enzhuan said a powerful agency managing the FTZ is crucial to its success, something the experience in Shanghai has shown. The committee managing the Shanghai FTZ falls under the city's government, is headed by a vice mayor and is in charge of setting all policies.

As an experimental project, the Shanghai FTZ has been under close scrutiny since its launch. Among the pilots tried in the zone, the adoption of a "negative list" – a list of areas closed to foreign investment – has won applause because in theory it opens more areas to foreign investment and reduces government intervention in business activity.

However, a gap has opened between the original design and policy implementation. The Guangdong official said businesses found difficulties to enter some newer industries not on the negative list – such as those related to the Internet – because local officials had limited experience in handling these businesses.

For instance, the Shanghai FTZ allows foreign investors to set up wholly owned health care institutions, but Shan Xiaohu, a partner at the consulting firm Strategy&, said medical practices run by foreign doctors still need the approval of central government agencies and are limited to one year of operations. "The authorization doesn't belong to the FTZ on this issue," he said.

Companies in the Shanghai FTZ want the city's government to take advantage of support from think tanks and other resources to improve its governance capacity and professionalism, especially when drafting specific industry standards and guidelines, Shan said.

Foreign firms also want the negative list to shrink and to enjoy greater openness, he said.

In June, the Shanghai FTZ slashed the number of items on the list from 190 to 139, but critics said it is still too long. The State Council meeting urged the zone's leaders to make more cuts, and further open the services and advanced manufacturing sectors.

The new FTZs will follow the example of Shanghai and adopt the negative list approach, Feng said.

The most watched aspect of the Shanghai FTZ is financial sector reforms, such as liberalization of the capital account and interest rates, and cross-border settlement of the yuan. Since the zone opened, financial regulators have approved 51 measures regarding financial reforms.

One of the most applauded moves was the May launch of a free-trade account that allows for greater flexibility in cross-border yuan flows. Money transfers between the accounts and those between the accounts and offshore or non-resident accounts – opened with a bank in China by overseas entities and individuals – are not subject to the restrictions on cross-border fund flows. By the end of October, 10 Chinese commercial banks joined the pilot and around 7,000 accounts had been opened.

Cheng Bo, the secretary general of the Free Trade Zone Research Center at Shanghai University of Finance and Economics, said companies must meet many requirements to be part of the experimental reforms. Most of the qualified companies have operated in the bonded area for many years and have little demand for capital. Meanwhile, new entrants with greater demand for funding fail to meet the requirements.

"The Shanghai FTZ has tackled some issues (in financial reform), but not the fundamental ones," Cheng said. The FTZ should assess its measures and work closer with central government agencies to further deepen and expand the reforms.

However, a source close to the Guangdong's commercial department said the experiment to push capital account liberalization in Shanghai will not be expanded soon.

Ji, from PricewaterhouseCoopers, said it would take a lot time to improve the regulation and the free-trade account system, and assess the performance of reforms. In addition, time was needed to work out sufficient supervision before measures could be expanded.

The Shanghai FTZ is also backed by Beijing's ambition to develop the city into an international financial hub, and Ji said this means the zone will continue to serve as testing ground for overall and systemic reforms of the financial sector.