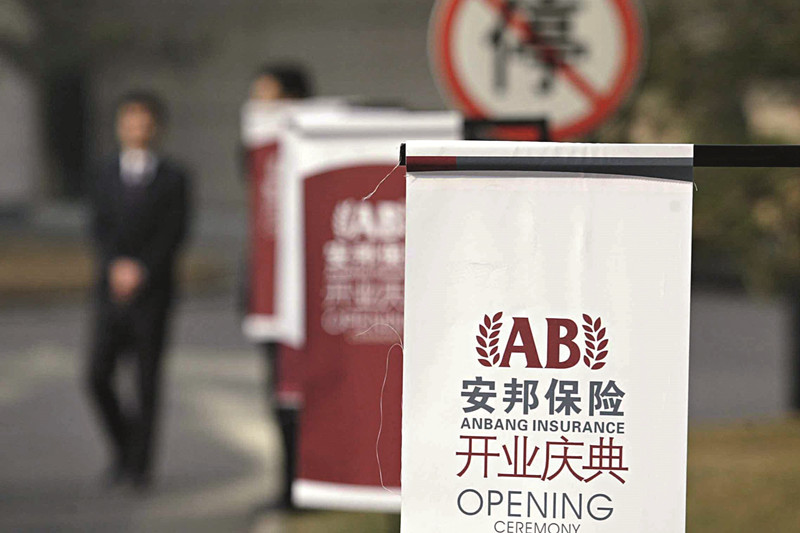 (Beijing) -- A Chinese insurance firm whose asset have swollen to more than 1 trillion yuan in just 10 years is also a rising global investor with recent deals for a mainland bank, a Belgian insurer and a famous Manhattan hotel.

Despite these and other high-profile investments, a degree of mystery surrounds the shareholding structure of Anbang Insurance Group Co. Ltd., its business operations, relations with government regulators, and Chairman Wu Xiaohui.

During its short lifespan, Anbang has received Chinese regulatory permission to operate a variety of financial businesses. Not only does the firm offer car, health, life and property insurance, but it is also licensed for banking, asset management, financial leasing and brokerage services.

Just five days before that, Anbang became the biggest stakeholder in China Minsheng Banking Corp. by paying nearly 2 billion yuan for one-fifth of the private bank. The insurance company snapped up 198 million Shanghai-listed shares for about 9.72 yuan each just two months into a dramatic rally for Minsheng stock, during which share values soared some 70 percent.

Anbang holds about 100 billion yuan worth of shares in other major banks, including China Merchants Bank and Industrial and Commercial Bank of China, as well as major property developers Gemdale Corp., China Vanke Co. Ltd. and Financial Street Holdings Co.

And Anbang controls the lucrative Chengdu Rural and Commercial Bank. In 2011, it paid 5.6 billion yuan for a 35 percent stake in the bank, which in 2013 reported assets of 420 billion yuan.

Anbang grabbed global attention in October by unveiling plans to buy the luxury hotel Waldorf Astoria in New York for US$ 1.95 billion from Hilton Worldwide Holdings Inc. The deal was approved by U.S. regulators on February 1, Anbang said on its website.

Anbang's big, aggressive investments of late have surprised players in China's insurance sector. One industry source who asked not to be named said the firm has been behaving "more like a fund manager than an insurance company."

The company has reported this incredible growth against the backdrop of unusual and some say mysterious reshuffling among stakeholders.

CIRC records show Anbang more than quintupled its registered capital – the amount of cash set aside by a company in China to qualify for a business license – between April and September last year. The 61.9 billion yuan in Anbang's registered capital is more than any other insurer in the country, even though Anbang ranks relatively low in the industry as China's 16th largest property insurer and No. 35 on the list of life insurance providers.

Not only did the company pump up its registered capital, but it added 31 shareholders to what had been a group of only eight in January. The adjustment – mirroring similar shuffling in the past at Anbang – may have been designed to skirt certain government stakeholder rules, an investment bank source who was unwilling to be named said.

For years, regulators said a single investor in an insurance firm could not hold a stake of more than 20 percent. Nor could an individual or company commission another to hold an insurance firm stake in its behalf. CIRC amended the rules in April 2014 to allow an investor to hold no more than 51 percent by getting specific approval.

Company documents reviewed by Caixin show that the equity in Anbang is now fairly evenly distributed among its dozens of investors. SAIC has seen its stake fall to 1.2 percent, while Sinopec's is now a mere 0.5 percent.

Business registration documents indicate every new shareholder joining Anbang in 2014 had recently undergone a shareholding restructuring or fundraiser that increased its registered capital. Most shareholders are small, obscure companies, including auto dealerships and mine operators. Most are registered in Chengdu, Shanghai, Shenzhen or Hangzhou.

Some new shareholders share addresses. For example, registration documents show nine new investors registered their businesses in the southwestern city of Chengdu on the same day – December 10, 2012. Each held an initial shareholder meeting at the same venue. They also use the same accountants and bank.

These nine companies held their separate 2014 shareholder meetings at the Chengdu Tianfu International Finance Center – a complex partly owned by Anbang since 2010.

Shifting winds have also been known to blow through Anbang's headquarters in the southern city of Shenzhen and major office in Beijing. A former company employee said front-office personnel may change more than once in a single year.

"Adjustments may be made several times every year," the person said, adding that although Anbang is big, its "entire company culture is changeable."

"Not every company can change this quickly," the former employee said. "It takes resources."

The resources that have apparently helped Anbang follow its unusual road to success include ties to key political and business figures. Several people close to Wu, Anbang's chairman, said these links include ties to relatives of former Chinese leader Deng Xiaoping.

Wu is often given credit for Anbang's meteoric rise. He's known for business acumen and a keen ability to win regulatory support, reportedly because of his close ties to CIRC officials.

"Anbang has the capacity to push regulatory limits" and convince government officials to revise regulations, said a source at an insurance company that competes with Anbang. The source, who requested anonymity, added that Wu is "very familiar" with CIRC officials.

Registration documents show several of these investors' licenses were picked up by Huang Zhen, a businessman from the Zhejiang Province city of Wenzhou, where Wu was born in 1966. Huang also serves as legal representative of one of the new shareholders, Shanghai-based investment firm Wenjun Investment Co.

Wu's brother and sister, Wu Jiaqi and Wu Xiaoxia, serve some of these shareholders as company directors or supervisors, according to a recent report in the Shenzhen newspaper Southern Weekend. Wu Jiaqi also reportedly serves as chairman of the Wenzhou Enterprises Chamber of Commerce in Beijing.

Wu has kept low profile and very few media reports have appeared about him before Anbang's rise. People familiar with him said he got started in business by renting cars and later branched out into infrastructure construction projects in Shanghai. Then he started Anbang.

Wu and Zhuo have a son but are separated, the sources familiar with Wu said. It is unclear whether they have divorced.

Media reports implying Anbang is linked to the Deng clan prompted a meeting of relatives of China's author of reform and opening up late last year, a person close to the family said. At the meeting, the Deng family concluded that no member had links to Anbang, the person said.

Nevertheless, according to business registration documents, Zhuo was a stakeholder in two of the 31 investors that bought into Anbang in 2014. She had sold those stakes as of December, registration records show.

A January 29 report by Southern Weekend brought public attention to Wu's connections with prominent figures such as 68-year-old Chen Xiaolu, the son of a famous People's Liberation Army leader, the late general Chen Yi, considered one of the fathers of modern China. Other notable associates include Zhu Yunlai, a son of former Premier Zhu Rongji, and Long Yongtu, China's chief negotiator in talks that led to the country's membership in the World Trade Organization.

Southern Weekend reported that more than 51 percent of Anbang is held by three private companies in which Chen Xiaolu has invested. Anbang's business registration says Chen is one of nine directors on the company's board of directors.

On January 29, Chen said he does not own Anbang shares but that he does serve as a company consultant. He said he and Wu have been business partners for 15 years, and that he has never gotten directly involved in the insurance company's operations.

Chen said acknowledged , however, that he had recommended in a conversation with Wu that Anbang should invest in U.S. dollar-denominated assets because, in his view, China's economy is slowing and the U.S. economy is recovering.

Zhu is a former China International Capital Corp. president, having served at that government-run investment bank for 12 years before stepping down last October. A source close to Zhu said he was invited to join Anbang's board of directors but declined. Despite this, Anbang listed him as a member anyway, the source said, then removed his name from this list on September 25 at his urging.

Long was one of the first directors on Anbang's board until quitting in November 2013.

Players in the insurance industry say Anbang has scored more regulatory approvals in recent years than its rivals. Special victories of late included permission to start a fund management firm, a pension insurance company and life insurance offices in Shanxi and Anhui provinces, and the cities of Shanghai and Shenzhen.

A CIRC official said Anbang has won fast-track approval partly due to Wu's initiative. He often visits the commission's offices, the official said, and follows up on CIRC action quickly.

But warning flags have been raised in the industry over whether Anbang's recent investments have exceeded regulatory limits. Media reports and business records indicate Anbang signed about 16 billion yuan worth of overseas deals last year.

It's been to Anbang's advantage that since 2012 Chinese regulators have been gradually loosening the reins on insurance company investment activities. Nevertheless, a CIRC rule announced in February 2014 said securities, equity and real estate investments by insurance companies could not exceed 30 percent of an investor's total assets.

A senior CIRC official said Anbang, through its investments, had not exceeded this new cap, based on the insurer's assets. "Anbang currently meets all regulatory indexes," the official said.

The company has not release its 2014 financial reports, but to qualify for the investments it made last year, assets of Anbang's life and property units should reach 35 billion yuan and 180 billion yuan by the end of 2014.

The timing of Anbang's investment in Minsheng is another reason for uneasiness about the insurance company's position and business strategy.

Since November, Anbang has invested nearly 40 billion yuan in Minsheng to increase its stake to 20 percent from just 3 percent. The firm replaced New Hope Group, an agricultural company, as the largest stakeholder. New Hope holds 7 percent. Previously, no single stakeholder controlled more than 10 percent of Minsheng.

CITIC Securities analyst Shao Ziqin said it is unclear how Anbang's stronger grip will affect Minsheng. Qiu Guanhua, an analyst at Guotai Junan Securities, said Anbang wants to control Minsheng since it is "the only listed bank (in China) that does not have a controlling shareholder."

Meanwhile, Minsheng's front office has been rocked by a corruption investigation.

Minsheng confirmed January 31 that its president, Mao Xiaofeng, had resigned after being targeted by corruption investigators from the Communist Party. The bank planned to name a new president in April or May following the selection of new board members.

Anbang has already won a seat on the bank's board. On December 23, the insurer's vice president, Yao Dafeng, was nominated to Minsheng's 19-member board of directors.