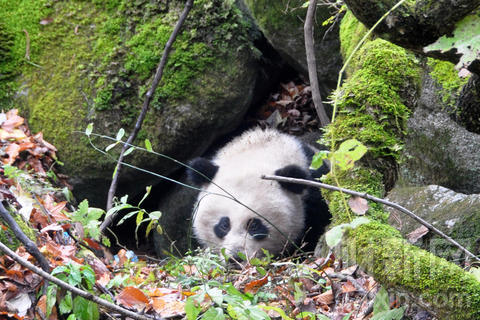 (Beijing) – The country's population of wild giant pandas grew over a recent 10-year period, the government has found, but one expert says the species that serves as an icon for China still faces series challenges to its long-term survival.

The survey by the State Forestry Administration (SFA) found that the size of China's wild panda population grew by 16.8 percent from 2003 to 2013. The country was found to have 1,864 of the black and white animals living in the wild.

The research started in October 2011 and the results were released on February 28. It is the fourth such survey the SFA has carried out since it started monitoring the populations of animals living in the wild in the 1970s.

The SFA also found that the habitat for pandas grew by 11.8 percent to 2.8 million hectares from 2003 to 2013. Giant pandas are now mostly found in the upper reaches of the Yangtze River, in the southwestern province of Sichuan and in Shaanxi and Gansu, which are in the northwest.

"Because of the breaking up of habitats and other dangers the giant panda population faces in the wild, the protection and long-term survival of the species remains a serious challenge," she said.

The SFA's deputy director, Chen Fengxue, also said conservation efforts still conflict with development. Of the 33 groups of pandas surveyed, 24 are endangered because their habitats are fragmented by roads, power lines and other infrastructure. Local government funding and expertise is mostly unable to support protection efforts, he said.

The central government has in recent years launched many forestry protection and reforestation efforts in a bid to preserve pandas' natural habitats and help their population grow. The SFA found that nearly 1,250 giant pandas live in 67 government-designated national reserves.