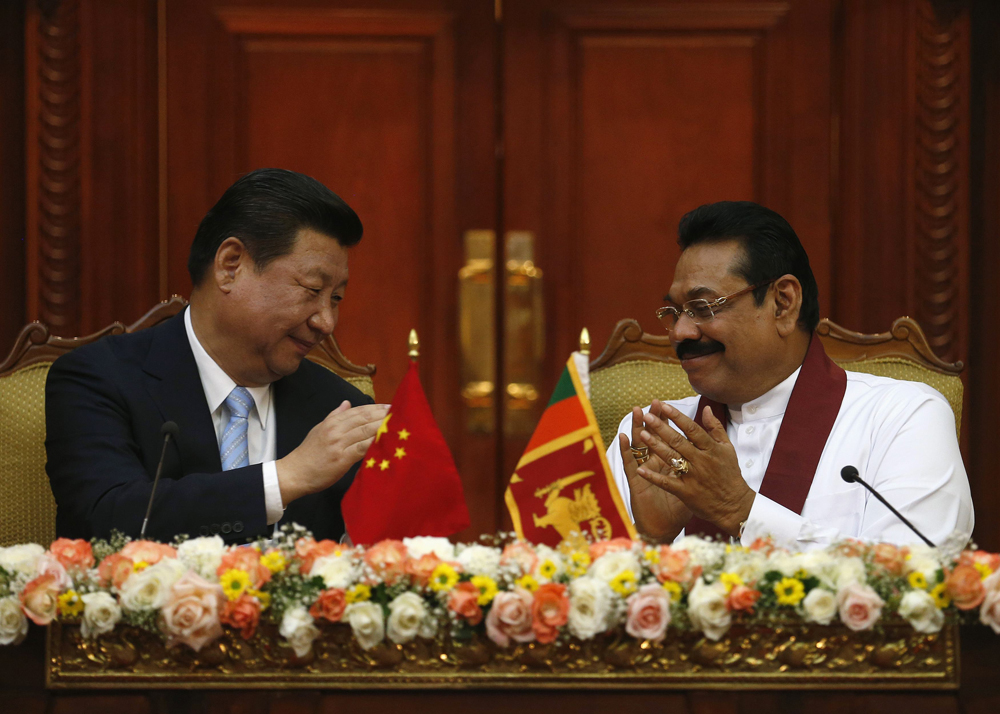 The project to build a commercial and residential center near a major port in Sri Lanka has spurred controversy in the South Asian country, as critics say it violates local laws and regulations and will damage the environment. Sri Lanka's government said it is holding off on the project while assessing its impact on the environment.

Maithripala Sirisena, who took office in January as president, had promised to look into a series of Chinese investments including the port project, which was approved by his predecessor, Mahinda Rajapaksa.

Shortly before Sri Lanka announced the suspension on March 5, its foreign minister, Mangala Samaraweera, granted Caixin an exclusive interview to talk about investment and his government's effort to build an inclusive relationship with all of the world's big powers, especially China, India and the United States.

Samaraweera, 59, met Premier Li Keqiang and Foreign Minister Wang Yi in Beijing on February 27 during a trip aimed at paving the way for Sirisena's visit to China's capital scheduled for late March.

Sri Lanka wants better relations with China, especially in view of "recent speculations that imply the new government is trying to downgrade relations between the two countries," Samaraweera said.

The claims could not be further away from the truth, he said, and the Sri Lankan government wants to take its ties with China to new heights.

However, it looks like the two countries will have a different relationship than in the past. Sri Lanka will pursue a foreign policy different from that of the previous government, which "alienated the whole world because they were in denial of fulfilling their international obligations," Samaraweera said.

"Our foreign policy is not driven by ideological interest. For us the only priority and the only factor which should be given prominence are the needs of our people and the economic betterment of our people.

"And in order to do so, unlike the previous government, we will work with all the power centers in the world," including Washington, New Delhi, Beijing, Brussels and London, he said.

The controversial port project would have been the largest foreign direct investment Sri Lanka has received. China's Ministry of Foreign Affairs said on March 6 in a routine press conference that it was paying close attention to the matter. Sri Lanka's government told Beijing that it decided to halt the project but not to terminate or cancel it, Hua Chunying, the ministry's spokesperson, said.

China Harbor Engineering Co. Ltd., a wholly owned subsidiary of state-owned China Communications Construction Co., was to invest US$ 1.5 billion to build Colombo Port City, as the project is known. It would build berths for vessels at the nearby port, hotels, shopping centers, office buildings and residential complexes, covering a total area of more than 5.3 million square meters.

The deal was to give the Chinese investors 1.08 million square meters of land in the area, some of it outright and the rest on a 99-year lease.

President Xi Jinping took part in the port's groundbreaking ceremony during a visit in September, a move that underscored the value China's government attached to the project. It was the first time a Chinese president had visited the country since 1986.

Sri Lanka was an important stop along the ancient maritime Silk Road, a collection of trade routes for ships that carried silk and ceramics from China to regions as far as eastern Africa and the Red Sea.

In late 2013, China's government said it wanted to expand its influence among countries along the maritime trade routes and beyond. The strategy, which Beijing calls the 21st Century Maritime Silk Road, involves investments aimed mostly at infrastructure development. It also has a twin, the New Silk Road Economic Belt, which is to link the country's west with Central Asia and eventually Europe.

Kabir Hashim, Sri Lanka's investment regulator, said he is worried about China's growing influence in the region. He has expressed concern that the port project would allow a Chinese state-owned enterprise to hold land in a strategically important area. Under Sri Lankan law, foreign companies are banned from owning real estate.

Sirisena, the new president, campaigned on a pledge to halt the project and better scrutinize foreign investments. Soon after taking office, he started reviewing a series of foreign investment deals signed during the tenure of his predecessor on the grounds they may have involved corruption or did not follow rules.

Many analysts viewed this as a move to curb investments from China, which is Sri Lanka's biggest foreign investor.

Samaraweera said all foreign investments would be re-evaluated and China was not being targeted. This check of the investments is necessary because the government found the signing and implementation of many contracts violated Sri Lankan regulations, he said.

The government started investigating the port city project after finding that it did not follow procedures as required and its environmental impact assessment was not completed, he said.

He said Sirisena asked the government to release documents about the project's bidding process and its environmental impact report when he led the opposition party, but the request was ignored.

"Now that we're in power, I think we have a duty to ensure that these concerns are addressed," he said. "Everything will be done in consultation with the government of China," he added, referring to the investigation.

China Harbor Engineering said it spent four years working out the contract with Sri Lanka's previous government and everything was done in conformity with local laws.

During the Rajapaksa years, Chinese SOEs won contracts to build and manage many infrastructure projects in Sri Lanka, including a port terminal for container ships south of the commercial capital Colombo, for 35 years. A Chinese warship and submarine docked at the port last year, and the Reuters news agency quoted Indian officials as saying that New Delhi was concerned about the visits.

Samaraweera said Sri Lanka wants to maintain good relations with China, India and the United States and it should not need to apologize to anyone for doing so. Sri Lanka continues to regard China as an important friend and ally, he said, and views India as a neighbor and brother – and an emerging superpower with whom ties should be improved.

"We also have to accept Washington as an important power center, and we have many good friends there also," he said.

Chinese banks have lent more than US$ 5 billion to Sri Lanka's infrastructure projects, which were mostly contracted to Chinese SOEs, Samaraweera said, and the government wants to renegotiate with Beijing the terms in some of the loan agreements.

The foreign minister also said the island country welcomes more Chinese investments in especially the health and education sectors, but it wants to "create a rule-based investing environment so that investors can come to Sri Lanka and their proposals can be chosen based on merits alone."

"Some large investments, not only Chinese ones, approved by the previous government, were tainted by corruption," he said.

Samaraweera left the door open to cooperation with China in the future, mentioning railroads as one possibility. He said he discussed China's high-speed rail network with Li. "We did not go into details, but the railway sector in Sri Lanka certainly needs improvement."