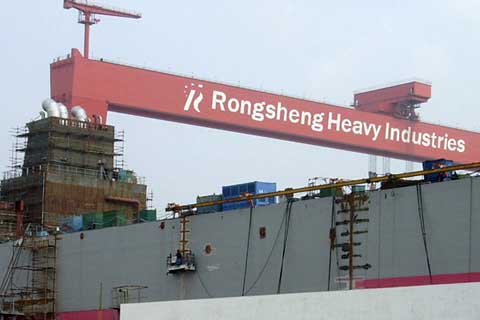 (Beijing) – Piles of rusty steel bars and old ship parts are virtually all that's left of a sprawling shipyard in the eastern city of Rugao, where Jiangsu Rongsheng Heavy Industries Group Co. used to employ more than 30,000 people.

Once China's largest shipbuilder, Rongsheng is on the verge of bankruptcy. Orders have dried up and banks are refusing credit. Questions have been raised about the shipyard's business practices, including allegations of padded order books. And Rongsheng is apparently behind on repaying some of the 20.4 billion yuan in combined debt owed to 14 banks, three trusts and three leasing firms, sources told Caixin.

The few hundred shipyard workers left – survivors of what's now a three-year downsizing – are wondering whether they'll ever see their overdue paychecks. Those with an uncertain future include a worker who cuts steel from abandoned ships into pieces that can be sold for scrap. "We haven't been paid since November," the worker said.

Rongsheng is on the ropes now that it has completed a multi-year order for so-called Valemax ships for the Brazilian iron ore mining giant Companhia Vale do Rio Doce. The last of these 16 bulk carriers, the Ore Ningbo, was delivered in January.

With a carrying capacity of up to 400,000 tons, Valemaxes are the world's largest ore carriers. Vale hired Rongsheng to build the ships starting in 2008, and has tolerated the shipyard's slow pace: The Ore Ningbo was delivered three years late.

Rongsheng employees said the Ore Ningbo may have been the shipyard's last product because no new ship orders are expected and all contracts for unfinished ships have either been canceled or are in jeopardy.

A Rongsheng manager who asked not to be named said Shipping Corp. of India recently cancelled an order for a 300,000 ton bulk commodities carrier. "And work has been suspended on a 57,000 ton crude oil vessel for Shanghai Northsea Shipping Co."

Another manager said he expected "no business after the delivery of the last ship to Vale. Most workers have been dismissed. Management can stay, but their numbers are falling. Their contracts will not be extended after they expire."

Rongsheng's weak financial position was highlighted by a third-quarter 2014 financial report in which the company posted a net loss of 2.4 billion yuan. It also reported 31.3 billion yuan in liabilities, including 7.6 billion yuan worth of outstanding short-term debt.

A source close to the company said Rongsheng's capital crunch has worsened since February 2014, when the CDB demanded more collateral after the company failed to make a scheduled payment on a 710 million yuan loan. When Rongsheng refused, the CDB called the loan. Other banks that issued loans to the shipbuilder have taken similar steps, said the source.

A few months after CDB's move, the Jiangsu Province government intervened by renegotiating overdue loans and encouraging Rongsheng to reorganize its business. Provincial officials and representatives from the Rugao government tried to help in May 2014 by sponsoring a meeting between Rongsheng and state-owned China State Shipbuilding Corp. (CSSC) officials aimed at a possible bailout.

At the meeting, officials discussed several cooperation options, said a source close to CSSC's board of directors. But the talks ended without an agreement. A CSSC source said his company decided against pursuing a tie-up due to the complexity of Rongsheng's asset structure and heavy debt.

"It would cost at least 5 billion yuan to restart operations at Rongsheng's facility, plus they have a huge amount of debt," the source said. "Buying Rongsheng would not be a good deal."

Also falling through was a proposed deal with an investment firm called Hongyi Shengli Investment Co., which offered to buy a 19 percent stake in Rongsheng.

Officials said in February the pending deal would make Hongyi Shengli the shipbuilder's largest shareholder, and that eventually Rongsheng would be overhauled and re-emerge as a company focusing on the energy sector. But just one week after the announcement, police detained Hongyi Shengli's controller, Wang Ping, on embezzlement charges.

On March 4, a Rongsheng statement said its board had dropped plans to sell a stake to Hongyi Shengli. A banking source said this meant Rongsheng's "second plan also failed."

Rongsheng's demise began in 2011, six years after company founder and former chairman Zhang Zhirong started the company with money made when he worked as a property developer in the 1990s. The new shipyard stunned the industry by clinching major vessel orders from the start, even at a time when most of the world's shipyards were slumping.

Rongsheng's success attracted investors and banks to the company's side, fueling its expansion.

In retrospect, said a Rongsheng executive, the company went too far. Financial reports for the years 2008 to 2011 show Rongsheng planned to spend between 1.5 billion yuan and 5.4 billion yuan annually on fixed-asset investments.

The executive said Zhang supported the expansion plan in hopes that greater production capacity would help accelerate shipbuilding and deliveries. In addition, a source close to Zhang said some expansion decisions were designed to improve the company's bottom line through real estate development that had nothing to do with building ships.

Nevertheless, the shipyard, a sprawling facility spread across one-third of Changqingsha Island in the middle of the Yangtze River, suffered from a lack of capacity and management problems. As a result, the company had trouble meeting its contract obligations, including delivery timetables.

"All of Rongsheng's problems are tied to difficulties with delivering ships," said a Rongsheng manager. "Many of Rongsheng's order cancellations were due to its own delivery delays."

Rongsheng built ships with a combined capacity of 8 million tons in 2010 and was preparing to begin filling US$ 3 billion in new orders the following year. But the company's 2011 orders wound up totaling only US$ 1.8 billion. That same year, according to shipping information provider Lloyd's List, Rongsheng's customers canceled contracts for 23 new vessels. A former Rongsheng engineer said the company had to significantly cut its equipment purchase spending plan because "there was no money."

In 2012, Rongsheng received orders for only two ships. Layoffs ensued, with some 20,000 workers getting the axe. The company closed the year with a net loss of 573 million yuan, down from a 1.7 billion yuan net profit in 2011 and despite 1.27 billion yuan in government subsidies. The bleeding worsened in 2013, with 8.7 billion yuan in reported losses.

Despite a recovery of the Chinese shipbuilding industry in 2014, Rongsheng saw no relief, as its clients canceled orders for 59 vessels that year.

Things were looking up for Rongsheng in May 2014, when it announced orders for six bulk carrier vessels from a European ship owner. But the contract was later dropped because Rongsheng couldn't find a bank willing to finance the project.

In years past, Rongsheng found it easy to get bank support for building orders. But according to a ship financing expert, banks changed their tune after Rongsheng started having trouble repaying loans. The repayment woes surfaced after the company apparently overstretched its order books to the point where it couldn't deliver vessels on time.

Moreover, sources close to the company said Rongsheng tried to look stronger than it was by exaggerating its records with fake orders.

The problems surfaced shortly after Rongsheng's November 2010 listing on the Hong Kong Stock Exchange raised HK$ 14 billion. The company wowed investors by declaring that it received orders for 111 ships. And Zhang impressed government officials by announcing that "Rongsheng is moving toward assuming a leadership position in the global shipbuilding industry."

In fact, though, the company's troubles had been quietly mounting behind the scenes since at least July 2009, when a Greek customer, Thenamaris Ships, cancelled an order for a 15,600 ton Suezmax bulk commodity ship after the shipyard missed its delivery deadline.

The ship, later named Roxen Star, was eventually built and bought by Roxen Shipping, a company controlled by Chinese businessman Guan Xiong, for US$ 72 million. The deal helped Rongsheng retain market confidence as it prepared for the listing.

In fact, according to several sources at Rongsheng, it was Zhang who bought the Roxen Star and paid Guan Xiong and Roxen Shipping.

Since then, Guan and his companies have reportedly stepped in to rescue some US$ 2 billion worth of ship contracts that were canceled by Rongsheng's other customers. Without these orders, Rongsheng never would have maintained its status as the No. 1 shipbuilder in China from 2009 to 2013.

Rongsheng's profitable period was marked by orders from around the world. Its first big client, Norway's Golden Ocean Group Ltd., ordered six freighters in 2005. The following year it banked orders for 49 vessels worth a combined 3.2 billion yuan.

In 2008, Rongsheng clinched contracts for 16 ships worth a total US$ 1.9 billion. The biggest deal – a US$ 1.5 billion contract with Vale for 12 Valemax carriers – was the largest shipbuilding contract ever signed.

Financing was a key ingredient in Rongsheng's formula for success. After the global financial crisis of 2008, many ship owners could no longer afford paying in advance for new vessels. So builders such as Rongsheng started arranging up-front financing with Chinese banks that got projects off the ground.

Financiers backed off, though, when it became apparent that Rongsheng was failing to meet delivery schedules and losing customers.

An employee of Everbright Bank who asked not to be identified said the bank's assessment of Rongsheng found that its biggest problems were tied to its production operations. "But by the time the bank realized the problem," the employee said, "the company was already in financial trouble."

Rongsheng's and Zhang's dealings with the phony contract angel Guan also played into the company's loss of favor with customers and financiers.

An example of this sleight-of-hand tactic revolved around a contract signed in August 2011 for 20 crude oil carriers to be built for a Hong Kong-based ship owner called Global Union. The order was written into Rongsheng's records, but a source said that not a single ship was delivered. It wasn't until July 2014 that Rongsheng acknowledged the order had been cancelled.

Behind Global Union is a Hong Kong based company named CMG Shipping, which is controlled by Guan, company documents show. According to business registration records in Hong Kong, Guan launched 12 shipping companies in that city in 2010 and 2011. In May 2010, some of these companies ordered nine bulk freighters from Rongsheng.

Rongsheng's order books show that through the years Guan's companies have ordered at least 30 ships from the shipyard, and 17 were cancelled.

A Rongsheng employee said Guan and Zhang are friends and business partners. Another source close to Rongsheng said Zhang paid for the ships bought by Guan's companies through shady contracts. The source said Zhang pulled all the levers for an order for six bulk carriers in 2011. The company placing the order was Marshall Islands-registered Superior Gain Investment Ltd., a company that was formed and registered as a business shortly before ordering the ships.

Rongsheng officials have never explained the company's order-book methodology to investors, nor responded to claims that Zhang and Guan conspired to inflate the shipyard's business. Stock investors have sold off Rongsheng, and it now trades at around 75 Hong Kong cents a share, down from a peak of HK$ 8.35 in 2011.

But a company employee who works in the office of Rongsheng President Chen Qiang said that Zhang and his business partner placed ship orders that did not have to be publicly disclosed.

And Lei Dong, director of the president's office at Rongsheng, said no listed company disclosure rules were violated because the shipbuilder can choose between two ways of reporting orders for vessels that won't be built as long as a contract remains valid.

However, an industry source said Rongsheng's true list of valid orders is much smaller than reported. "I think Rongsheng counts all intended and cancelled orders," the source said.