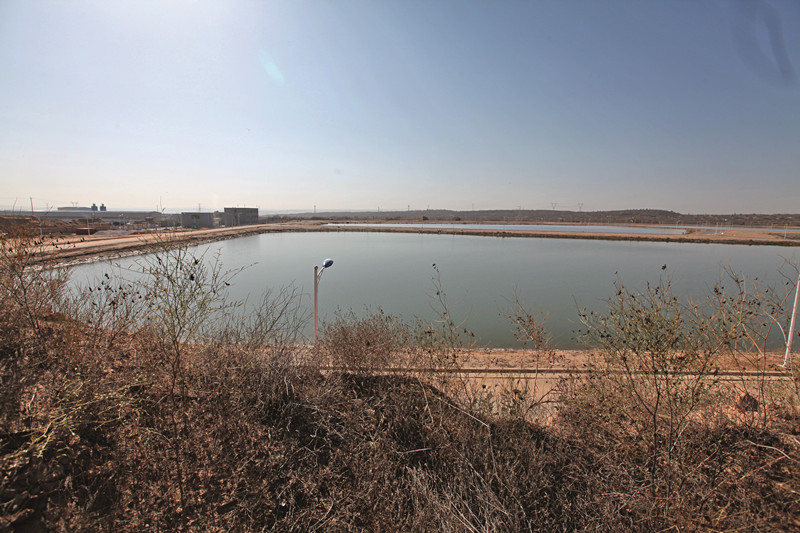 On February 13, the ministry announced it handled a series of pollution cases in January, including an order to close the Shilin Chemical Plant in the southern area of the Inner Mongolia region. It cited figures from the local environmental authority as showing that excessive levels of heavy metal elements and bacteria have been found in underground water around the plant since May 2014.

Shilin Chemical, a firm in Ordos that produces methanol from coal, was established in 2005, and is owned by state-owned Shandong Energy Zibo Mining Group Co. and Inner Mongolia Shilin Investment Group.

Villagers living around the plant have complained that Shilin Chemical has made a mess of the area. A local named Niu Cunlin said that since the facility started operations, levels of groundwater had fallen and the area has had to deal with heavy dust on windy days. "The grass is all black," he said.

Villagers also complain that the plant's wastewater discharge gives off an awful odor. The plant put the waste into ponds that smelled terrible. One local compared the odor to that from rotten eggs. The same villager said his parents and one-year old child started suffering breathing difficulties last year and doctors have found problems in their lungs.

Shilin Chemical runs five of the wastewater ponds. Three have equipment to prevent water from seeping into the ground, but the others do not.

The company says the ponds are evaporation ponds that are designed to protect the sensitive environment of the desert.

Many industrial companies in Inner Mongolia and other northern and western regions have built the high-salt-content evaporation ponds approved by environmental protection authorities, a Caixin investigation last year found. The idea is that by exposing the discharge to the air and sunlight, the water will evaporate, leaving behind salt and toxins that can be processed.

That's the theory, but the ponds have never functioned as planned. The reality is unprocessed wastewater is spewed into the ponds without proper treatment and pollutants leech into, the soil and underground water, creating a terrible pollution problem in many parts of northern China.

Villagers living near Shilin Chemical have been bothered by the plant's emissions for many years, but have had difficulty doing anything about it. One villager said they complained to the company several times, but nothing was done because it is difficult to prove a link between the company's discharges and the illnesses suffered by some people and also the death of livestock. Villagers also pleaded their case with local environmental authorities, but again made little headway.

Shilin Chemical's five ponds are among the roughly 100 similar sites scattered across Inner Mongolia, Ningxia, Shaanxi and Xinjiang. They were included in factory-building plans to make sure companies could work toward a goal of zero emissions, thus winning official approval for their projects.

Factory owners and local officials have for years argued the ponds complied with environmental requirements, but their case is tenuous. What happens is unprocessed pollutants form an oily film on the surface of the ponds that actually prevents evaporation. This forces the dirty water to then seep into the ground.

A chorus of complaints from the public and the ensuing media coverage eventually got the attention of the central government. In early October, President Xi Jinping ordered an inspection and clean-up campaign aimed at the ponds.

All of the firms were found to have problems with their ponds that led to tainted groundwater.

Six evaporation ponds were built and operated by a sewage processing plant attached to the Yuheng Coal Chemical Industrial Park. They are 6 meters deep, cover 265,000 square meters and intended to process liquid discharge from four plants in the park.

An environmental assessment report for the industrial park said the ponds would produce no emissions. However, since April 2013, area residents have filed many complaints related to fumes from the ponds and complained of tightness in their chests and coughing. Even before that, in 2012, the local environmental bureau fined a coal chemical subsidiary of Shaanxi Yanchang Petroleum Group for problems with the wastewater it was dumping into one of the park's ponds.

Late last year the ponds in the park were renovated so they could be equipped with processing facilities. Area residents said the odor has been mitigated, but they are still worried their drinking water is dirty.

Yao Huaizhang, the director of the local environmental bureau, insisted the Yuheng industrial park had achieved its goal of zero emissions.

However, in January, a villager living near the park sent Caixin a video clip showing a broken sewage pipe linked to the evaporation pond spewing dark liquid onto the ground. A local newspaper cited a manager of the sewage processing plant as saying that about 400 tons of wastewater spilled out of the ponds because the factories were discharging too much.

In its February report, the environmental ministry said its branch in the area ordered the sewage processing plant to fix the problem and prepare for an examination. The plant was also slapped with a 50,000 yuan fine.

The same report also said that authorities in Inner Mongolia, Ningxia and Shaanxi have started inspecting evaporation ponds and collecting detailed information about their operations.

Most of the ponds were built during a boom period for coal mining and coal-chemical processing industries that began in the late 90s, as part of efforts to achieve zero emissions for factories. It was seen as a way to stop discharges into rivers to meet environmental requirements.

From 2006 to 2010, 15 of 27 proposals to build chemical plants that were submitted to the State Council for approval said the goal was zero emissions. Most of these plants were along the upper and middle reaches of the Yellow River, the northernmost of China's three biggest rivers.

In the ensuing years, environmentalists and non-governmental organizations have repeatedly said these projects were major polluters, including those operated by leading energy firms Shenhua Group and China Datang Corp.

Zhou Xueshuang, a petrochemical pollution expert at the environmental ministry, said no factory has reached the goal of zero emissions because this requires huge capital outlays for special equipment and engineering. "Zero emissions can only be achieved in a laboratory," he said.

Environmental experts said the concept of zero emission was popular because it provides a seemingly legitimate solution for industrial companies to start production in environmentally sensitive regions.

"Zero emissions is a fairy tale created by interest groups," another environmental expert said. "Everyone knows it is hard to achieve, but without it, how can a project get launched?"