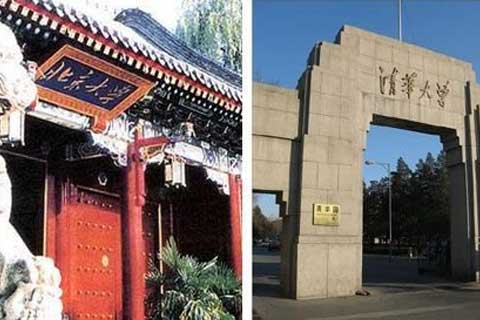 (Beijing) – Two top mainland universities climbed in the latest rankings of colleges around the world that is produced by a leading education publication in Britain.

Tsinghua University was ranked No. 26 in the 2015 Times Higher Education World Reputation Rankings published on March 12 – an improvement of 10 spots for the university in China's capital.

Peking University rose nine places to No. 32 on the fifth annual list of what is intended to be the world's 100 most prestigious universities. The survey by Times Higher Education was based on responses from 9,794 senior academics from 142 countries around the world from November to January. Some 15.8 percent of the responses were from the United States, and about 10.6 percent were from China.

The academics could nominate up to 10 universities they were familiar with. The focus was on research and teaching quality.

"These tables are based purely on subjective opinion, but it is the informed opinion of those who know most about excellence in teaching and research: academics themselves," said Phil Baty, who edits the rankings.

Harvard University again claimed the top spot this year, followed by the University of Cambridge and University of Oxford. Eight of the top 10 universities are in the United States.

Tsinghua is the third-highest ranked university in Asia, after the University of Tokyo (No. 12) and National University of Singapore (No. 24).

The list only gave the exact ranking for the top 50 universities; the rest were grouped in batches of 10. The University of Hong Kong landed in the group of 51 to 60, and Hong Kong University of Science and Technology was in the 71-80 grouping. National Taiwan University in Taipei was in the 61-70 group.

Parents and students paid attention to the rankings, said Gong Ke, president of Nankai University in Tianjin, and this put pressure on universities to strive for better positions on the list.

These scholars usually chose topics that foreign academics were interested in, he said, and this hurt research into topics that are important to China.