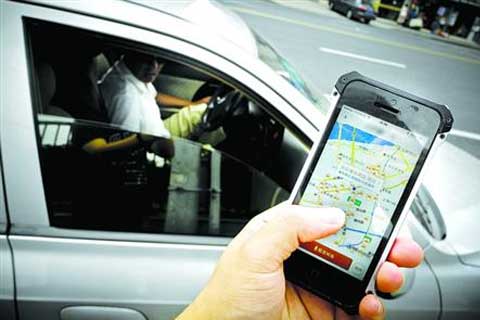 The Uber-Yongda tie-up, the terms of which were not disclosed, was announced on March 18, about a month after China's largest car-service and taxi-hailing app providers, Didi Dache and Kuaidi Dache, cut a similar cooperation deal.

The separate agreements are expected to fan the flames of China's hot market for car-hire and taxi-hailing app services. The New Express, a Guangdong Province government newspaper, recently estimated the nationwide car-hire services market alone could someday be worth 400 billion yuan.

So far, the market has been dominated by Didi and Kuaidi, each of which started as taxi-hailing businesses in 2012 with apps offering users fare discounts and other deals. As of December, Kuaidi had 56 percent of the market and Didi the rest, according to the consultancy Analysys International. The companies added car-hire services last summer.

Key to the Didi-Kuaidi merger decision was the threat posed by Uber, which launched its China division in July, according to Zhu Xiaohu, the general manager of GSR Ventures, a firm that's invested in Didi.

Uber and Yongda are focusing on businesses that actually handle car-hire services, many of which in China are run by car-rental agencies with hired drivers. Under the deal, said Yongda President Xu Yue, rental agencies will buy millions of yuan worth of Audis and Volkswagens over an unspecified period of time. Xu provided no further details.

Uber officials were also tight-lipped. Speaking with Caixin, an Uber executive in China would only say that the app provider is itself not buying any cars.

The general manager of Uber China, Wang Xiaofeng, said that through the deal with Yongda, car-rental agencies will be able to finance their car purchases at discount prices.

How the agreement affects Uber's competition with Didi and Kuaidi is unclear. The Chinese companies have been using discounts and promotions to win clients. And according to iiMedia Research CEO Zhang Yi, they've managed to build a revenue stream by collecting fees from drivers.

But questions have been raised about whether a Didi-Kuaidi merger would monopolize the car-hire market. A competing car-hire company owned by Baidu called Yidao Yongche filed complaints in February with the Ministry of Commerce and the National Development and Reform Commission, claiming the merger violated antitrust laws.

Yidao Yongche, which has been in business since 2010, argued the merger needs permission from government regulators, which Didi and Kuaidi did not receive.

Zhou Hang, founder of Yidao Yongche, said Didi and Kuaidi are unfair competitors because they're tapping a deep well of funds to subsidize their services. These funds support customer discounts, for example, that undercut rivals.

Taxi drivers have also shaken a few fists at car-hire services, prompting local governments in some cities to come to their defense by, for example, banning car-hire companies that they've categorized as unlicensed taxi services.

Thousands of drivers protested car-hire service competition by idling their cabs January 4 in the northeastern city of Shenyang, state media reported. Similar protests were reported in the eastern cities of Nanjing and Jinan.

Authorities in each city affected by the taxi protests responded within a few days by banning Yidao Yongche, Didi and Kuaidi services.

Zhou said he's spoken about car-hire services with transport officials as well as authorities working for city traffic management agencies. Many of these officials think car-hire services could in fact help improve the taxi industry by keeping prices under control, he said.

Taxi drivers have taken special aim at car-hire services that offer rides in luxury cars but charge no more than taxis, said Han Yanming, a taxi company executive in the northern province of Shanxi. Only if such services focus on market niches not covered by taxis will taxi drivers feel they're being treated fairly, he said.

Yet some taxi drivers have already admitted defeat by leaving taxi companies for new jobs with car-hire services.

And in fact, Han thinks that over the long run taxis will survive the current onslaught of competition from car-hire services, which are using discounting to attract passengers. Once the discounts end, he said, taxi fares will be basically lower than car-hire fares, which will steer passengers back to taxis.

Indeed, Yidao Yongche lost money last year after using discounts to lure passengers as well as drivers away from Kuaidi and Didi.

Yidao Yongche has cooperated with a financing arm of home appliance manufacturer Haier Group to give car-rental companies financial support. And on March 6, the company held a meeting with partnered car rental companies to discuss the need to hire more drivers.