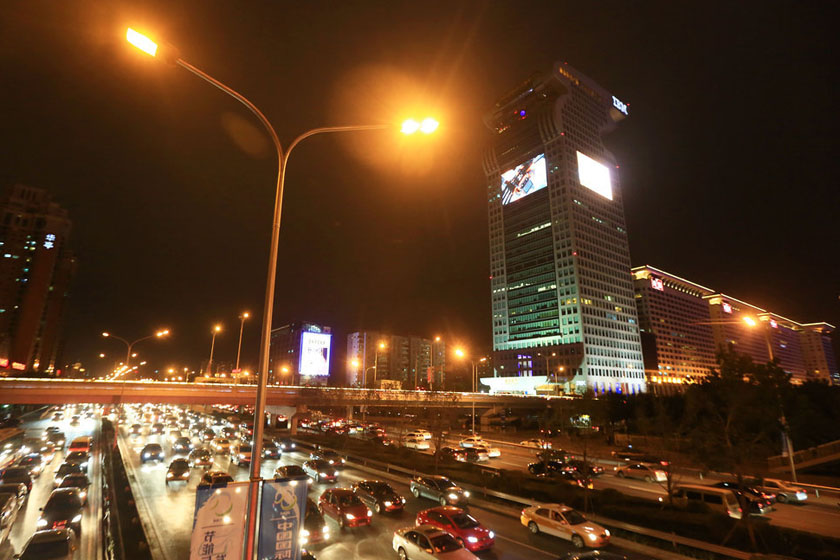 The Pangu Plaza in northern Beijing

(Beijing) – A recent business dispute between a state-owned technology conglomerate and a private property developer has put a low-profile but powerful businessman in the spotlight. The businessman is believed to have brought down a former Beijing deputy mayor, control a landmark building project in the capital and have close ties to a disgraced national security official.

Amid accusations of fraud and other wrongdoing, the business argument has spilled over into graft charges and led to the detention of top executives from both sides, including Founder Group CEO Li You.

As the investigations unfold, Zenith's founder, Guo Wengui, has entered the spotlight. Once close business partners, Guo and Founder's Li together promoted the deal between Founder and Zenith, but their relationship later turned sour.

The 48-year-old Guo, who is now living overseas and has 15.5 billion yuan in personal assets, is reportedly a close ally of Ma Jian, the former vice minister of the Ministry of State Security who was detained in January by the Communist Party's graft buster. Media reports said Ma helped Guo bring down the former deputy mayor of Beijing, Liu Zhihua, with a sex scandal that cleared the way for Guo to control a key land project near the Olympic Green park in northern Beijing.

Months after the fierce fight and recriminations between Founder and Zenith, Founder Group's Li was detained by police on corruption allegations on January 4. Sources close to the matter said that before his detention, Li wrote letters to authorities accusing his previous business partner, Guo, of wrongdoing.

Shortly after Li's detention, the Central Commission for Discipline Inspection (CCDI) announced an investigation into Ma. Several sources close to the security ministry said Ma was detained around January 7.

A source who did business with Guo said that Li became an acquaintance of Guo's in the 1990s when Li worked in the audit department in the central province of Henan, where Guo started his property business.

According to the source, in May 2013, Li helped Guo to raise money through Founder's trust subsidiary, Founder BEA, to fund Zenith's acquisition of Beijing-based Minzu Securities Co. Guo and Li were very close at that time and Guo introduced Ma to Li, the source said.

Guo started buying Minzu Securities in 2009 when he paid 291 million yuan for 6.81 percent of the company from Shijiazhuang Commercial Bank. In the following years, Guo paid a total of 1.89 billion yuan to get more than 80 percent of Minzu. However, because it is small, Minzu Securities' business has remained slow.

Sources close to the companies said that after the merger was completed in August, Zenith asked for five seats on Founder Securities' board of directors and the right to name three managers in the company's six major departments. But the request was rejected by Founder Group, souring the relationship.

Guo was angry over losing control over company operations and one source said he told Li: "You set a trap for me."

Guo gained control of Minzu Securities in 2011 when Zenith acquired 61.25 percent of the company from Capital Airports Holding Co. (CAH), an airport operator controlled by the Civil Aviation Administration of China (CAAC). CAH auctioned off the stake at the low price of 1.6 billion yuan, but with strict requirements on the buyer. Zenith was the only bidder.

During Guo's acquisition, his former business partner, Qu Long, told the CCDI that Guo partnered with Ma to use the power of the state security department to intervene in Minzu Securities' share sale and make Zenith the only bidder.

In March 2011, shortly after the report, Qu was detained in Beijing by police from Hebei, the northern province that nearly surrounds Beijing, on suspicion of "illegally holding guns." Qu's family said he was taken away by more than 10 people, including a mid-level official from the Ministry of State Security.

The next day, Guo completed Minzu Securities' share transfer from CAH. A month later, a Hebei court sentenced Qu to 15 years in prison for embezzlement of 855 million yuan.

During his detention, Qu wrote in a report that after he told the CCDI about Guo, "Guo called me and told me he knew all about my report. He threatened me: 'You dare to report me, count your days.'"

In the report, Qu said that "in 2009 and 2011, Guo worked with officials from the security ministry to issue several official letters asking the CAAC and CAH to transfer Minzu Securities' stakes to Zenith at a low price in the name of national security."

Qu said Ma personally intervened in Zenith's acquisition of Minzu Securities from Shijiazhuang Commercial Bank and CAH to secure the deal for Zenith with favorable terms and prices. "Guo conspired with state officials to cause a loss of state assets worth billions of yuan," Qu said.

Another source in the securities industry close to Minzu said that during the CAH share sale and in the following transactions, officials from the security ministry met with Minzu's major shareholders.

"They were friendly, gave their identities and said Guo's company was their partner," the source said. "They hoped we could offer some favors and lower prices."

On January 16, the CCDI officially announced an investigation into Ma. Sources close to the investigation said that Ma was found to have six villas and as many mistresses, including two who worked for the Ministry of State Security. Another two bureau heads in the ministry were also detained after Ma.

Ma's brother, a deputy head at a domestic financial institution, and his former secretary were also placed under investigation, sources close to the inquiry said.

People familiar with Guo said he is friendly and always smiling, but ruthless in business. His identity document shows that he was born in 1967 in Zhengzhou, in the central province Henan. He also used the name Guo Haoyun in Hong Kong.

Guo was named vice chairman and general manager. In 1994, Yuda clinched a government-backed residence development project and built Zhengzhou's landmark skyscraper, the Yuda International Trade Center. However, the building put Yuda in debt because spending on it hit 2.6 billion yuan, up from a planned 1.6 billion yuan.

Sources close to the matter said that to complete the project Guo used some of the property for Yuda International Trade Center as collateral to get 28 loans from Industrial and Commercial Bank of China, loans totaling 588 million yuan. Those loans eventually went bad and were handed in 2005 to China Great Wall Asset Management Corp. for it to dispose of.

In November 2007, Great Wall Asset Management tried to auction off creditor rights worth a total of 717 million yuan for 273 million yuan, but no one was interested.

According to Qu Long: "Officials later agreed for Guo to buy back the liability for 100 million yuan."

Sources close to Guo said he built strong connections with Henan officials, including Wang Youjie, the party chief of Zhengzhou between 1995 and 2001. Wang was handed a suspended death sentence in 2007 for corruption in land deals.

Around 2002, Guo started to switch his business focus to the capital, where he set up Beijing Morgan Investment Co. and Beijing Zenith Holdings Co.

In 2002, Morgan Investment and Zenith bought two plots of land in northern Beijing. The parcel bought by Morgan Investment was near the Olympic park planned for the 2008 Games – about 500 meters from the iconic National Stadium, also known as the Bird's Nest.

According to a 2006 report by Business Weekly, Morgan Investment paid 360 million yuan for the Olympic park plot in 2002, equivalent to just 860 yuan per square meter. The seller was the capital's Bureau of Land and Resources.

Morgan Investment originally planned to build a compound that included three skyscrapers on the plot that would be home to office space and hotels, but work did not proceed smoothly.

In 2003, the Beijing government told Morgan Investment to revise its plans to better fit the planning for the Olympic park. Meanwhile, disputes between Morgan Investment and the contractor, Beijing Construction Engineering Group, caused a suspension of work.

In October 2005, the capital's land bureau revoked Morgan Investment's rights to the Olympic park plot, saying the company failed to pay for the property in full. Morgan Investment sued the bureau in January 2006, but lost. All of its licenses regarding the development of the plot were revoked.

Sources close to Morgan Investment said the company lobbied officials for help in the matter. Guo went to the then vice mayor of Beijing, Liu Zhihua, who was in charge of land use and Olympic projects development, to get the changes reversed. However, Liu refused to help.

Sources close to the matter said the detention of Liu Zhihua was triggered by a report made by Guo to central government officials that accused Liu of corruption. Guo also provided authorities with a 60-minute video of Liu engaging in under-table dealings and extra-marital affairs.

Several sources said that Ma, then assistant to the minister of state security, helped Guo get the video of Liu. The video was sent to top leaders, triggering a quick response from the CCDI.

In September, the Beijing government canceled the deal that Beijing Capital Group and Guangxi Yangguang's had for the plot of land. Shortly afterward, Morgan Investment regained the land for the original price of 360 million yuan.

In 2008, the Pangu Plaza complex was erected on the land, and they overlook the Olympic park, which has become a Beijing landmark.

The fight over the Olympic park plot proved Guo had a successful partnership with officials like Ma, a strategy he repeatedly used to build his fortune in the following years.

In late 2007, Tianjin Huatai sold about 70 million shares of Tianjin Jinbin, cashing in about 1 billion yuan for Zhao Yunan. Zhao was detained in June 2008.

Several sources close to the case said that Zhao's family approached Guo through an acquaintance to bail out Zhao. With Guo's help, Zhao was granted bail and promised to transfer Tianjin Huatai's assets to Guo, which was worth 400 million yuan.

In 2012, a creditor of Tianjin Bohai Circle, Xie Jiansheng, accused Zhao of engaging in fraud because the Tianjin Jinbin shares owned by Tianjin Huatai had been used as collateral in a US$ 11 million loan Xie lent to Zheng a few years ago.

Zhao was detained in Jiaozuo, Henan, and then released, because, according to Xie, Ma sent officials to the public security bureau in Jiaozuo asking them to drop Zhao's case, saying Zhao was a special agent of the state.

Xie later sent a complaint to a central government inspection team. In June, Henan prosecutors decided to reopen their investigation into the case and Zhao was again detained.

But in late September, Wang Shaozheng, a vice police chief in Jiaozuo who was in charge of Xie's case, was placed under investigation for graft. Xie fled to Canada to avoid being arrested for paying bribes.

Sources close to Guo said he has used his luxury hotels, including the ones in Yuda International Center in Zhengzhou and the Pangu Plaza in Beijing, to host high-level officials to develop connections.

Sources said he collected evidence of wrongdoing by officials by secretly shooting videos of them living in luxury and engaging in affairs so that he could blackmail them later and help his business interests.

A property evaluation document shows that Guo owns a 3,000 square meter courtyard home in central Beijing that had a market price at 700 million yuan in 2010. Sources close to him said Guo used the venue to receive senior officials.

Guo also built 12 courtyard homes on top of the Pangu Plaza building and sold them to officials and businessmen. A Beijing municipal urban planning document shows that these homes, with a total area of 11,298 square meters, were deemed illegal because they broke urban planning rules. However, no action has been taken to address the problem.