Reinventing the Bicycle in Beijing 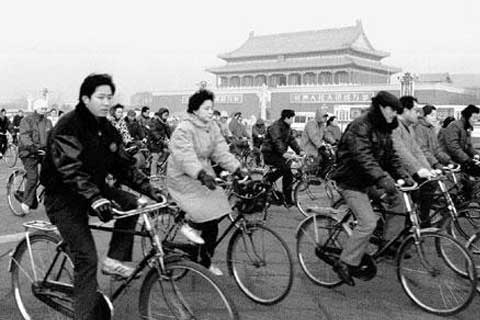 Beijing's streets are littered with skeletons. Corralled into the shadows between intermittent streetlights, or laid bare on the pyres of public refuse, they shrink from the high-beam gaze of the lumbering Audis struggling through narrow lanes. They are the remnants of a previous age: the Kingdom of the Bicycle.

With the highest household vehicle ownership in China, and ever-expanding ring roads encircling the city, the once mighty bicycle is no longer the status symbol it once was. Instead, now many urbanites profess that they would rather cry in a BMW than smile on the back of a bike, a sentiment that is hard to overcome amongst China's rapidly expanding middle class.

But, thanks to the efforts of a growing community of cycling enthusiasts, new flocks of bikes are taking to the streets, and public perceptions are shifting.

Ines Brunn, founder of the Natooke bicycle store in Beijing's Andingmen district, has dedicated the past decade to revitalizing the bicycle. Upon moving permanently to the Chinese capital in 2004, Brunn became increasingly dismayed to see the steady dwindling of everyday cyclists and began to work with environmental NGOs and other concerned citizens to restore a quickly decaying cycling culture.

It soon became clear, however, that to save the bicycle, Brunn and others would have to combat rapidly shifting consumer tastes. As China's middle class swelled to hundreds of millions, it brought with it a new consumer culture that relegated cycling as a symbol of poverty. This represented a marked shift from the days, mere decades earlier, when the bicycle, along with the sewing machine, radio and wristwatch, was one of the "four big things": the ultimate status symbols for reform era consumers.

But in a sign of the changing times, the percentage of the population nationwide using bikes as their primary mode of transport dropped at an annual rate of 2 to 5 percent between 1990 and 2010, while car ownership skyrocketed from 5.5 million to over 70 million, according China's National Statistic Yearbook. In Beijing alone, bicycle use fell from its peak in 1986 at 63 percent to only 13.9 percent in 2013, according to the Beijing Transport Research Center.

"Bikes were discarded everywhere, nobody wanted to cycle: it was a thing that society wanted not to think of anymore. That was the past, the old days."

As Brunn reflects, during those first few years living in China, the simple question of "do you cycle?" had become an unutterable faux-pas: "I figured that out quite quickly and never asked that question again. People were deeply offended by that question, because it meant I was regarding them as if they had no money."

According to David Wang, founder of Bamboo Bicycle Beijing, a common phrase of young people in auto company focus groups was "I can't get married unless I have a car."

"There is so much cultural value attached to car ownership in China, especially in urban China right now, that even if you don't need a car for transportation needs, you need it for social needs," Wang says.

With a background in youth-directed marketing, Wang says that many young Chinese people have turned to brand names and a new DIY trend to find a sense of self. But the ubiquitous Flying Pigeon bike of the past, with its limited palette of dark green or black, was hardly the brand identity that many sought.

For Wang, the solution lay in the forests of Sichuan and the discarded bike frames littering Beijing's hutongs. First experimenting with re-inventing the Flying Pigeons of the past with modern paint-jobs, Wang moved on to designing and building bike frames made of bamboo and carbon fiber. One successful kickstarter campaign and over one hundred bikes later, his workshop in Beijing's Langjia Hutong now attracts young urbanites from around China every weekend to try their hands at bike construction.

"Chinese youth like being empowered through having their hands on stuff. They also want something that expresses their identity. In the 1980s, bikes were much more of a transportation tool, sort of like a mule that you ride to work. Now, people are starting to look at the bike as a form of identity expression."

According to Wang, the bamboo bicycle workshops also foster a sense of community that many young people seek in an increasingly atomized society. The model is spreading across China, with participants inspired to set up their own workshops in Hong Kong, Guangzhou and Chengdu.

Like Wang, re-framing the bike as a vehicle for individual expression is the cornerstone of Brunn's approach. At her shop, customers are required to select from a cornucopia of parts to build their fixed gear bikes from the ground up. Brunn said attitudes have quickly changed, with over 2,000 bikes built and sold at Natooke since it opened in 2009.

Brunn says that in the beginning people were scared to make the decision of designing their bikes from the ground up, "but now they don't care anymore. Society is already at the stage where they love that kind of individualism: this is mine and looks completely different from yours, because this is mine."

But even with growing appreciation for cycling, urban planning remains oriented towards car ownership. According to Ministry of Public Security statistics, in 2014 Beijing had 63 passenger vehicles per 100 people, almost three times the national average. While city governments across China periodically cap new vehicle numbers, the nation continues to be motorized at break-neck speed. Last year, the Beijing city government announced plans for a new 940-kilometer ring road, adding to the six existing highways that already encircle the capital city.

According to Wang, Beijing and other Chinese cities are increasingly adopting the urban planning principles of the post-WWII North American sprawl, rather than capitalizing on existing bike-friendly infrastructure.

"In terms of the direction that Beijing is going, the roads that are being built aren't including cycling lanes any more, especially the ones that are made for high speed. Because, as Beijing grows and adds more and more rings, it's become less of a priority to develop roads around cycling as it was in the 1970s or '80s."

Regardless, in only a decade, people like Ines Brunn and David Wang have managed to re-frame the discussion around cycling and nurture a social trend that continues to grow. For Beijing's skeletons, maybe it is time to come back into the light.