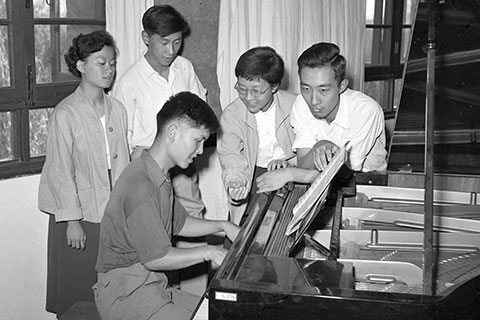 Gu Shengying poses with other famous young Chinese pianists, all recipients of awards at international competitions, in a photo taken September 20, 1960

Over the many years I have spent writing about art and politics in China, I have heard countless stories of the tribulations to which supremely talented and dedicated artists and musicians were subjected during the Cultural Revolution (1966–76). Many of these tales are inspirational – because the artists survived, carried on, even forgave – but some involve acts so cruel and unjust as to be virtually inconceivable. The stories of two musicians in particular – Gu Shengying and Lu Hongen – have long haunted me, in part because their losses remain so raw to those who knew them.

Gu Shengying (1937–1967) came from a prosperous Shanghai family. Her father reportedly had 20,000 books in his home library, her mother studied French literature, and the renowned translator Fu Lei was a family friend. She started piano lessons at the age of five and excelled – her elementary school classmate, Ding Zilin, wrote an essay in which she recalled Gu's parents coming in a car to collect her from school every day at 1:00 p.m. so she could devote the afternoon to piano. By the time she was a teenager, she was practicing 10 to 12 hours a day.

Gu performed with the Shanghai Symphony in 1953 at the age of 16, playing concertos by Beethoven and Mozart, and after that became the orchestra's soloist. She was sent to the Central Conservatory in Beijing to study with studied with two Russian teachers, Tatulian and Kravchenko; they said she learned twice the music per year as even the top students at a Soviet conservatory. Gu took first prize in the 1957 Sixth World Youth and Student Festival and the following year got second prize (the highest awarded) at the Fourteenth International Music Competition in Geneva. This was an era in which China was extremely proud of the young pianists – like Fu Cong, Liu Shikun, and Yin Chengzong – who represented the nation in international competitions, and Gu was the most prominent woman among them. A 1962 article in Peking Review called her "an accomplished and versatile artist of exceptional range" and praised her playing as "delicate, sensitive and poetic." The reviewer noted that her accomplishments were not due to "talent alone, nor only the solicitude and care lavished on her by the people's state" but the "result of hard work."

Ding Zilin remembered the young Gu as lovely, clever, gentle, humble, and kind – words echoed by everyone I have ever met who knew her. Indeed, nobody has an unkind thing to say about her – and all recall her talent and discipline with awe. I have likewise seen those who knew her fight back tears, decades later, when they recall her fate at the hands of the Red Guards who beat, abused and humiliated her; made her kneel before a portrait of Mao Zedong and "confess" her sins; dumped ink her on head; and accused her of being a revisionist, a "white" professional (as opposed to red), a traitor to the foreigners. Gu's father had already been arrested and she lived at home with her mother and younger brother. When she was informed that she would be the main target of the next day's struggle session, it was more than she could take. She mailed a package of chocolate to her father in jail and then, at home with her mother and brother on January 31, 1967, turned on the gas – and the three left this earth together, forever. It was years before her father found out – he was never able to learn what had become of their bodies. Ding Zilin, who lost her own son in Tiananmen Square in June of 1989, wrote this of Gu:

Facing a direct threat to your life really needs courage. It is the same when one faces humiliation. Delicate and fragile as Gu was, she chose to die to defend herself rather than to beg for mercy living on humiliation. How brave she was! There is an old saying: "A gentleman can be killed, but not humiliated. Gu used death to preserve her respect and dignity.

Lu Hongen came from a Catholic family in Shanghai; he was educated at the prestigious Xu Hui High School, which had been founded by Jesuit missionaries. He joined the Shanghai Symphony as timpanist shortly after liberation and eventually became the orchestra's second conductor. Lu was the kind of person who spoke his mind. In 1951 he got in trouble because he was involved in recording the soundtrack for the movie "The Life of Wu Xun," which was denounced by Mao Zedong; Lu responded by writing a sarcastic limerick and sending it to his colleague, the conductor Huang Yijun. During the anti–rightist movement, he argued forcefully that a music director should be the supreme authority of an orchestra, not the Communist Party Secretary. In 1962, while studying Mao's writings on art and literature, he responded to criticism of Beethoven by asking, "Should Beethoven look up to the workers, peasants, and soldiers or should the workers, peasants, and soldiers look up to Beethoven? I think the latter. The workers, peasants and soldiers should raise their cultural and artistic level and become more familiar with symphonic music."

Comments such as these came back to trouble Lu when the Cultural Revolution broke out, but he did not change his ways. Forced to participate in study sessions to criticize "Three Family Village," the collective pseudonym of three writers – Deng Tuo, Wu Han, and Liao Mosha – who had been labeled anti-Party, Lu said he saw nothing wrong with their articles. When the Red Guards called him a revisionist he lost control and shouted, "I am a revisionist! Long live revisionism!" After that, Lu was thrown into the Shanghai Number One Detention Center, where he became Prisoner Number 1144 (in a cell shared with Liu Wenzhong, upon whose account I am drawing).

Criticism sessions continued even in jail. Asked to condemn Shanghai Conservatory President He Luting, Lu praised him as a master musician – but he did call Jiang Qing, Mao's wife, a "witch." Incidents such as these were followed by severe beatings that left the handcuffed and shackled Lu bruised and bleeding. He coped by humming his two favorite Beethoven pieces, the Third Symphony and the Missa Solemnis. Gradually, however, he lost his grip – whenever he saw wool, a homonym for Mao, or the color red, he would frantically start shredding it; on one occasion, he tore up a copy of the "Little Red Book" of Chairman Mao's sayings. This led to a special criticism session, at which a guard shouted, "Prisoner 1144, do you want to live or die?"

Lu thought for several minutes, and then said, "I want to live, but I don't want to live like the walking dead – without freedom, I'd rather die. … The Cultural Revolution has destroyed truth, friendship, love, happiness, peace, security and hope. It's worse then Qin Shihuang burning the books and burying the scholars."

That was the final straw, and Lu must have known it. He asked Liu two favors: to find his son and tell him his father's fate and, were it ever possible to "escape" China, to go to Beethoven's tomb, lay a bouquet of flowers, and tell the great composer that his Chinese admirer, Lu Hongen, had hummed the Missa Solemnis as he marched to his execution.

A week later, at midnight, Lu was called out of his cell. He left, as promised, humming the Missa Solemnis, through lips cracked from beatings. After a mass rally in Shanghai Culture Square, he was shot dead on April 27, 1968. A bill for the bullet was delivered to his mother, who was too afraid to collect her son's body. Years later, Liu Wenzhong, went to Vienna, stood over Beethoven's tomb, and fulfilled Lu Hongen's last wish.

Someday, when China has an official memorial or museum to commemorate the victims of the Cultural Revolution, Gu and Sheng will certainly be in it – until that day, we must keep telling their story.