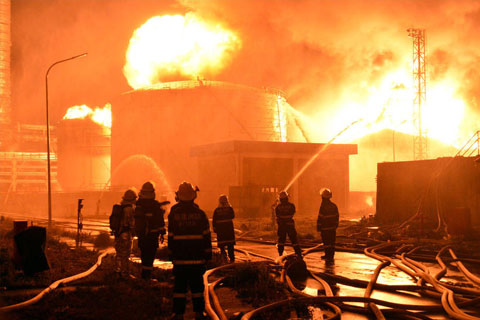 (Beijing) – The massive explosion at a chemical factory in Zhangzhou, Fujian Province is likely to reinforce mounting public distrust towards the government's oversight of petrochemical projects. But as the fallout from the disaster continues to brew, regulators must bring factories in line with international practices of safety oversight to control the damage.

The blast broke out at the Dragon Aromatics Plant, a paraxylene, or PX, producer on the night of April 6 in the city of Zhangzhou, on the Gulei Peninsula. Locals said the jolt released by the blast was felt some 30 kilometers away from the site of the explosion.

More than 700 firefighters were dispatched to battle the flames. Authorities gave conflicting reports on the number injured, which have been put at a few to more than a dozen. Preliminary investigations show that the blast was traced to an oil leak.

Paraxylene is a chemical used in manufacturing polyester clothing and plastic bottles, and has been found to damage the nervous system and abdominal organs if inhaled or absorbed through the skin.

The PX plant, owned by Taiwanese petrochemical group Xianglu, experienced an explosion in July 2013, though no casualties or toxic leaks were reported in that incident.

The explosion has reignited debate over PX projects in China, which can be dated back to 2007.

The PX plant in Zhangzhou was initially slated for construction in Xiamen, but a rare mass protest in 2007 forced local authorities to drop the multi-billion yuan project.

Zhao Yufen, a chemistry professor at Xiamen University and an academic at the Chinese Academy of Sciences, was among the first to publicly criticize the planned PX plant in Xiamen when she organized a high-profile petition with 100 signatories months before the protests.

However, the campaign suffered when she gave misleading comments on the toxicity of PX by likening the chemical to benzene and nitrobenzene. The latter are two proven carcinogens that made the headlines after a PetroChina plant explosion in November 2005 led to a spill of the chemicals in Jilin Province's Songhua River.

In April 2014, a group of Tsinghua University chemical engineering students, who compared the toxicity level of PX to coffee during public debates on a PX plant in Maoming, Guangdong Province, became embroiled in a bitter war of words with activists on Baidu encyclopedia, a Chinese version of Wikipedia, over a definition of PX.

However, according to the U.S. Center for Disease Control and Prevention, even short-term exposure to PX can cause irritation to the eyes, nose and throat.

While PX may not be as dangerous as some commentators have made it out to be, the students should distinguish levels of toxicity and potential toxic risks in processing.

Opponents of PX projects say the blast in Zhangzhou has affirmed their fears over the construction of such facilities and possibly lax standards. But some have pointed to the strong safety records of projects in other countries built even closer to residential areas.

As the debate on the pros and cons of PX manufacturing has continued to evolve, some say the PX controversy has become a platform for the expression of skepticism over the credibility of authorities.

In many developed countries, expenditures on safety measures and ecological protections often account for half of the investment in major petrochemical projects and on top of that, regulators are compelled to keep the public informed to cultivate support.

To bring the public on board, the governments in these countries have also put in place sound governance and legal oversight, in addition to maintaining open channels for the public to communicate their views.

In contrast, China falls far behind in these aspects and even worse, regulators are implicated for abuses linked to such projects from time to time.

Shortly after the April 6 blast, some analysts pointed to possible failures in the enforcement of safety measures.

The Zhangzhou explosion is likely to heighten widespread skepticism not only over PX projects, but many other petrochemical facilities in China, which puts Chinese regulators in the increasingly difficult position of balancing economic development with safety and environmental protection.

To win public trust, authorities should implement an accountability system to prevent regulators from overlooking safety violations and to safeguard the rights of victims in the provision of proper compensation.