On the Well-Chosen Word 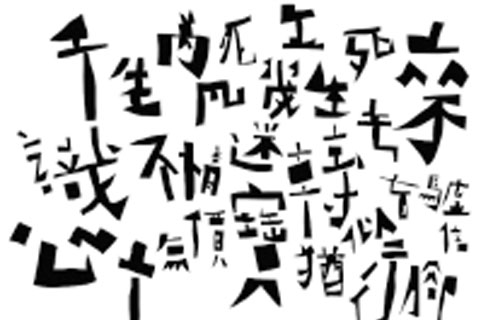 The most extraordinary aspect of perusing the National Museum in Taipei is not just the artifacts on display, but the story it tells about Chinese history. Among the other unparalleled treasures, there is a room of printed texts from throughout the ages and it is almost incomprehensible to those of us schooled in the West that upon seeing some writings which look completely recognizable and fresh in terms of style and font, to look down at the label and discover it is in fact an original from the Song, the Tang or, in some cases, the late Han dynasty. In English, we could barely make out Chaucer in its original form, let alone Beowulf; yet an educated Chinese person could visually (if not intellectually) make out every word from these texts.

Purely as a numbers game, it seems inevitable that Simplified Chinese characters, as established by China in various rounds of reform from 1956 onwards, will win out in representing the Chinese language. By every measure, Simplified outstrips Traditional complex characters in usage and the education of new learners whether ethnically Chinese or foreign. Yet if one examines the rhetoric that still emanates from Greater China and in particular Taiwan, it becomes clear that although this is known, the declining world of Traditional Chinese still grips the moral high ground. But the common, non-academic proponents of Traditional labor under two common misconceptions.

The first and most obvious is that simplified writing reform was undertaken as random vandalism. It is frequently cited that learners of both languages often arrive at the conclusion that much of the shortening has been the work of Communist progressivism, purposefully disregarding the features of an ancient civilization. Yet this is far from the case. Only a small portion of the simplification process involved wholesale substitution of components or, in extreme cases, hatcheting of words. On the contrary, many of the new forms reached back into various strains of traditional Chinese including ancient alternative and vulgar forms, commonly used short hand and caoshu (cursive) print representations. The thousands of delegates meeting in 1956 searched far and wide for forms which could be best reconciled sympathetically with the language which already existed, and in many cases did so quite cleverly. The fact is that the simplification process, for all its imperfections, remains a monumental intellectual achievement which stands alongside Johnson's first dictionary.

The second mistake is to ignore the fact that impetus for language reform has been long-standing, and natural. Simplification had been discussed throughout the 19th century and a lesser version had even been implemented (albeit only for six months) in China under the Kuomintang in 1935. Lu Xun, China's most prominent writer of the 20th century, had gone as far as to say that "China is doomed if the Chinese characters are not wiped out." Yet this is not the only evidence of natural evolution – Japan simplified its version of Chinese (kanji) in 1946 and the introduction of shinjitai was itself a form of linguistic reform. Likewise have the Koreans and Vietnamese slowly changed the usage of their hanzi (mostly for local terms) to the extent that both, like Japanese, have characters unique to their own language. And of course, controversial reordering of language is not just limited to logographic languages, as the much-debated 1996 German reform demonstrated. Of course, the timing and extent of the jiantizi was very much a choice of the Communist Party but they were only tapping into what was an ongoing debate about how the language should move forward. For sure, reform was not just a Communist conspiracy.

The question should therefore really center on whether the process has been executed well, and it is here that the communities in Taiwan and overseas have been particularly vocal. Without going into the details here, the reality is that there were good and poor simplifications in the process. Some of the less controversial changes might include the word meaning "to learn," changing 學 [xué] to 学 for instance, since the original does rather evoke the over-burdening of a child's head with the excesses of Traditional stroke counts. Likewise the adjustments of the word for "energy," as 氣 [qì] to 气, or "to be" as 為 [wèi] becoming为, which are both so "elemental" that not much is lost. Indeed the adoption of台 [tái] (from 臺) is indicative of the necessity of some changes.

Against this are the changes whose aesthetics are so difficult to swallow, such as the change from廣 [guǎng] to 广; the unsatisfactory merging of words based on phonetics such as both髮 [fā] and 發 [fā] become 发; and those changes which are perceived as being purely political such as the conversion of華 [huá] to 华, and the so-called "国-phenomenon" as identified by Zhao and Balduff in Planning Chinese Characters. The most prominent rallying cry of all for the Traditional Chinese community is of course was the heartless [sic] extraction of心 [xīn] out of 愛to give us the word for love as爱 [ài]. Without doubt, these could have been done more sensitively.

The balance sheet is mixed, and Simplified Chinese is not to be defended in and of itself per se. However (and leaving aside the arguments over literacy which – very broadly – support Simplified), the reforms have one important anthropological argument in their favor: they recognize constant evolutionary change. On the Mainland, there have been effectively five rounds of reform in 1956, 1964, 1977, 1986 and 2009; in Taiwan the written language has remained ossified, with a commensurate impact on its viability. The problem across the Strait and elsewhere in the Traditional Chinese world is that the social, intellectual and political opposition to Simplified script leads to the ultimate fallacy: that Traditional as we know it today is, effectively, "perfect." It has been done, the process has finished and there is nothing left to fix. This can be neither logically or empirically true.

The truth is that, had the Communists never won the war, and had Mao and others not pushed the reform agenda strongly, Chinese written script would have changed at some point. Around the margins, evolutionary use would have materialized; and it is quite possible that a centralized standardization of some sort may have been instituted. Modern Chinese would therefore be something in between today's Traditional and Simplified. It is probably time for the Traditional school to recognize that, even if they do not agree with everything that has been done, the cause was more natural and noble than has been given credit for.