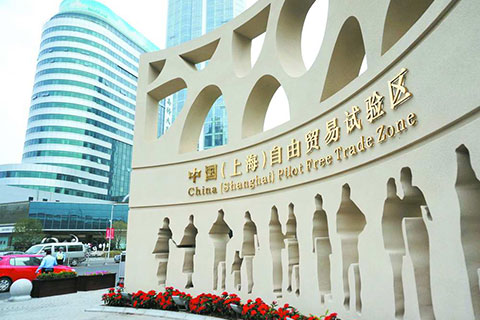 (Beijing) – Three new free-trade zones opened in several cities along the coastal provinces of Fujian and Guangdong, and Tianjin municipality, in a renewed push to build on a model that debuted in Shanghai.

In March, President Xi Jinping urged the government to quicken the pace of free-trade zone (FTZ) expansion during the annual meetings of the legislature and top political advisory body.

The localized FTZ structure is being rolled out as part of China's campaign to hasten economic reforms amid a deepening slowdown.

China's economy expanded 7.4 percent last year, the slowest rate since 1990. Observers have attributed the downturn to factors including softening domestic demand, unsteady exports and declines in the housing market.

On April 20, the State Council announced detailed plans for the three zones in the northern port city of Tianjin, the eastern province of Fujian and the southern province of Guangdong.

In September 2013, the country rolled out its first FTZ in Shanghai, citing plans to experiment with looser capital controls and open up rules on foreign investment.

Guangdong Province's FTZ area covers the Nansha district of Guangzhou, Qianhai district of Shenzhen and Hengqin district of Zhuhai. In Fujian Province, the FTZ area is located in Pingtan county, and the cities of Xiamen and Fuzhou.

Wang Shouwen, assistant minister of the Ministry of Commerce, said the new zones would test measures in areas such as trade regulation and financial systems.

In the newly-launched zones, foreign companies will still be required to register business moves such as start-up plans and shutdowns to government authorities. But they do not need government permission to make these business decisions.

The detailed plans show that the new zones will largely operate on the same framework of rules as the Shanghai FTZ, but will also feature regulations based on localized government initiatives.

The Tianjin FTZ will function to integrate the region encompassing Beijing, Tianjin and Hebei Province. The Guangdong Province zone will aim to facilitate mainland cooperation between Hong Kong and Macao. In Fujian Province, the zone will center on trade ties between the mainland and Taiwan.

Zheng Shanjie, vice governor of Fujian Province said regulations under the Fujian FTZ will channel investment from Taiwan into businesses such as communications, transportation and tourism, at a press conference on April 20.

The Guangdong vice provincial governor Xu Shaohua said at the same meeting that Hong Kong investors are expected to enjoy more preferential investment policies such as fewer restrictions on shareholding in mainland companies.