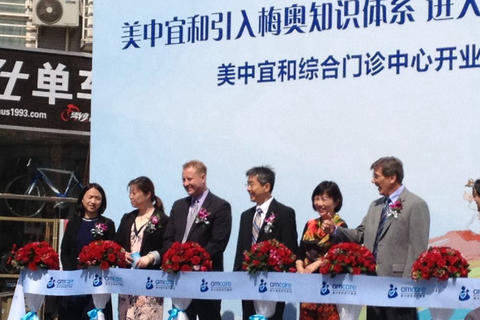 (Beijing) – Amcare Women's and Children's Hospital has become the first foreign-invested medical services institution in China to set up a general hospital, amid growing opportunities in the private hospital business.

Amcare Corporation, which is backed by U.S. investment giant Warburg Pincus LLC, entered a partnership with a joint venture company owned by American medical services group Mayo Clinic to set up a hospital in Beijing. The facilities will cater primarily to the emerging middle class, according to Amcare Corporation founder Hu Lan.

Hu said that they decided to open the hospital based on earlier market research that pointed to a growing demand for premium family clinics in China.

Mayo Clinic, based in Rochester, Minnesota, set up the joint venture with Hillhouse Capital Group earlier in January.

The number and scale of private hospitals remains insignificant in China, but some with good reputations such as Amcare have done brisk businesses catering to a growing group of affluent people who have shunned inferior services and inefficiency at public hospitals.

The hospital will focus on the concept of family physicians to overcome the bottleneck in access to qualified doctors at the community level in China.

Yu, who herself was a high-profile doctor at the Beijing Union Medical College Hospital, said that the new Amcare hospital now has 18 doctors and some 20 nurses, many of whom used to work at public hospitals but were increasingly dismayed by shortfalls in the quality of the public hospital system.

However, she said that the hospital still faces some obstacles in attracting a larger pool of doctors despite recent reforms to allow public hospital doctors to work part-time elsewhere.

Another challenge is that their services have yet to be covered by any public and private health insurance policies, which means patients will have to front their medical bills as an out-of-pocket expense.

Founder of Dr. Smile Medical Group, a private physician alliance group in China, Zhang Qiang said that Amcare Corporation can enter the all-purpose hospital market because it has gained a reputation for good medical service management through its years of medical care for women and children at its other facilities.

He said that the field of obstetrics is driven more by service than diagnosis, and private hospitals with expertise in medical care for women and children are expected to see greater market potential as the private health care industry slowly opens up.