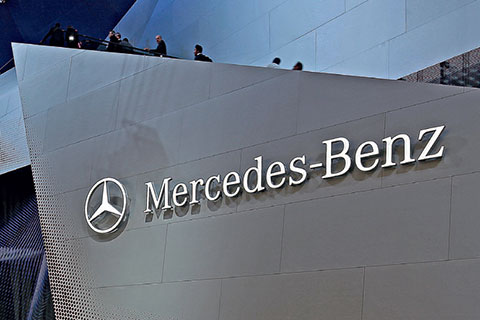 The fine was the highest ever imposed on a foreign carmaker in China since anti-trust investigations began in 2013, said Luo Lei, deputy secretary-general of the China Automobile Dealers Association.

The Jiangsu Provincial Price Bureau, which operates under the provincial branch of the National Development and Reform Commission (NDRC), said April 23 that provisions of China's 2008 Anti-Monopoly Law had been violated via sales of the company's Mercedes-Benz vehicles and parts at dealerships in the province.

The German company's Mercedes-Benz China Ltd. unit was fined 350 million yuan, while fines totaling more than 7.8 million yuan were imposed on dealerships in cities including Suzhou, Nanjing and Wuxi, according to the bureau's announcement.

The bureau was ordered to publicize the fines by the country's top economic planner, the NDRC, the state-run Xinhua News Agency reported.

Agencies responsible for enforcing the anti-monopoly law include NDRC, the State Administration of Industry and Commerce, and the Ministry of Commerce.

Company officials told sales agents at the independently operated dealerships – through phones calls, during personal discussions and at meetings between January 2013 and July 2014 – that they should sell Mercedes-Benz E-Class and S-Class cars at fixed prices, thus gouging consumers, said the bureau.

Daimler said it had accepted the bureau's findings and the fine. The company also said it had carried out a comprehensive internal investigation and would adjust its business practices.

Luo said the government is enforcing the anti-monopoly law in ways designed to keep big carmakers from gouging consumers. He said the recent investigations and fines could deter monopolistic behavior by other companies.