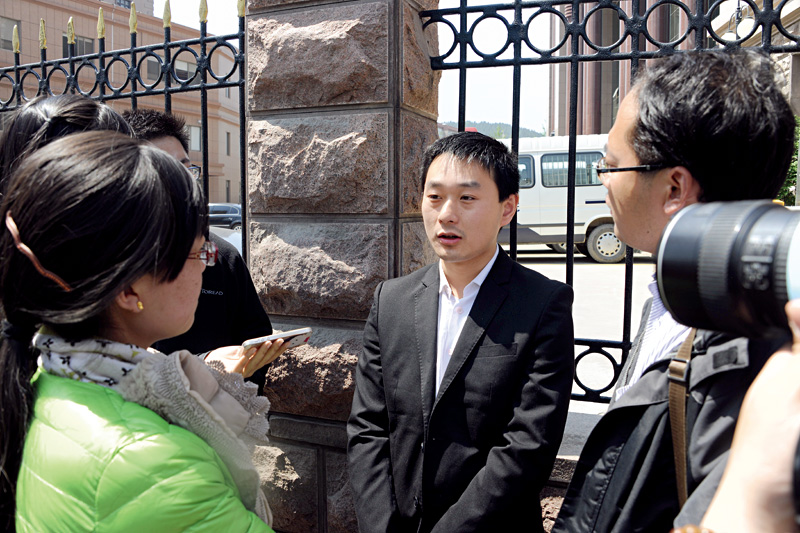 Chen Chao talks to reporters after his hearing in Jinan, Shandong Province, on April 15

(Beijing) – Chen Chao, a 28-year-old pharmaceutical company sales representative who moonlights as a chauffeur, is at the center of a contentious debate over regulating China's car-hire industry.

By suing a local government's transportation department in Jinan, in the eastern province of Shandong, Chen has drawn national attention. He's challenging the department's right to slap him with a 20,000 yuan fine simply for driving two travelers to a train station. Chen is suing to have the fine reversed.

When a Shizhong District People's Court judge heard the case in April, more than 300 people, including 47 journalists and dozens of officials, packed the courthouse. A verdict is pending.

The lawsuit has become a litmus test for driver-for-hire rules that control businesses not only in Jinan but across the country. Authorities are struggling to enforce these and related rules that mainly apply to taxis and precede the advent of smartphone apps through which consumers can book cars and drivers.

Chen's case, the first of its kind in the country, could affect the legal environment in which app-based, car-hire service operators such as Didi Zhuanche, backed by social networking giant Tencent Holdings Ltd., and Kuaidi Zhuanche, supported by the e-commerce company Alibaba Group Holding Ltd., have been operating since opening in 2014.

Much like clients of the Uber app in other countries, smartphone users in China can get cars and drivers through apps. But these services operate in a legal gray area in the country, and their drivers have been criticized as unlicensed taxi drivers.

In some cities, taxi companies have taken app-based services to task, arguing that only licensed cabbies can legally offer driving services. Authorities who have taken legal action against car-hire services have been cheered on by taxi companies, which are generally government-run.

In Shenyang, in the northeastern province of Liaoning, thousands of cab drivers took to the streets on January 4 in part to vent their frustration over what they said was the government's failure to enforce the law and crack down on car-hire services. Similar protests later broke out in Jinan and Nanjing, a city in Jiangsu Province, in the east.

The central government has set few legal boundaries for car-hire services. Xu Chenguang, a spokesperson for the Ministry of Transport, said in November that car-hire services should not be banned. On January 9, however, the ministry said commercial drivers were banned from soliciting riders using their own cars unless they work with car rental companies.

Chen's lawyer, Li Wenqian, an associate at Beijing Wenxin Law Firm, said his client filed the case to contest the power of Jinan's transportation authorities to impose the fine. Li said that the judge did not respond to his request for a general ruling on the legality of the car-hire industry.

"I took them to court because I want justice done," Chen said. "They were rude and did not follow due process when they imposed the fine."

Chen's ride through the legal system began in November when he applied for a job as a driver for a car rental company. He heard that car-hire drivers could make 10,000 yuan a month. He got the job and started work.

Early on January 7, Chen drove two travelers to Jinan's West Railway Station from a downtown location. At the station, Chen was stopped by transportation department officers and charged with driving without a taxi license, according to Li.

Chen initially tried lying his way out of trouble by claiming he was simply giving friends a ride. Later, he admitted he was working for a car-hire company. Officers responded by writing a ticket and seizing the car. Chen later paid the fine and got the car back.

In court, transportation authorities defended their right to fine Chen, arguing that private drivers providing car-hiring service via apps are just like unlicensed taxi drivers, who are subject to a fine of 5,000 yuan to 30,000 yuan.

Under a 2003 order issued by the State Council, China's cabinet, any driver providing taxi-like services must have a special license. The rule is included in a council order called Measures for Investigating, Punishing and Banning Unlicensed Business Operations.

Car rental companies have managed to get around this order by operating in a legal gray area since 2007, said Shen Kui, a law professor at Peking University. That year, the central government ended rules that banned car rental companies from employing drivers.

In cities such as Beijing and Shenzhen, demand for car-hire services has been especially strong since 2011, the year local governments started limiting vehicle purchases to control traffic and pollution. Apps backed by Tencent and Alibaba made these services even more appealing.

Car rental companies, which are government-licensed, initially met some of this new demand for cars with drivers. Later, demand far outstripped rental company supplies, forcing them to cut deals with other car owners to supplement their fleets.

Taxi companies and cab drivers rose up against the car-hire industry after it started seriously biting into their business.

Fu Weigang, a research fellow at the Shanghai Institute of Finance and Law, blamed strict licensing rules covering taxi and car rental companies for the gap between supply and demand. Car-hire services have expanded simply to fill that gap.

But in recent months, car-hire companies have suffered from regulatory backlash in cities such as Jinan.

"The arrival of car-hires has no doubt impacted the taxi market and how it's regulated in China," Shen said.

Shen said that behind the legal debate over the car-hire industry are companies offering the service on one side and state-owned taxi companies along with their affiliated government departments on the other.

Zhou Hanhu, a research fellow at the Law Research Institute, a division of the Chinese Academy of Social Sciences, said car-hire services should be seen as progress and thus not restricted by old rules. Instead, he said, existing regulations should be revised to accommodate the new business environment.

Chen told Caixin he was approached by a Didi Zhuanche manager who offered to cover his fine if he would continue to drive. The manager said he would pay off the fine with 5,000 yuan installments over four months if Chen would handle at least 100 rides each month.

Chen was skeptical. "What if I'm caught during the next four months?" he asked. "Will the fines never end?"