Pool of Migrant Workers Expands Slower than in Past 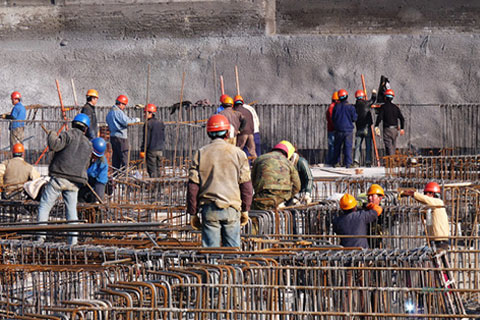 (Beijing) – China's pool of migrant workers is not growing as rapidly as in the past and they are making more while finding jobs closer to home, an official report says.

The growth of China's number of migrant workers – people who leave rural areas to find jobs in cities – has fallen for five straight years. The country had 274 million migrant workers at the end of last year, about 1.9 percent more than a year earlier, the report by the National Bureau of Statistics says.

Some observers say this is happening because the population of working age people – which the government defines as those from 16 to 60 years old – is shrinking.

China had 915.8 million working age people at the end of last year, about 3.71 million less than 2013, official data show – the third year in a row that this segment of the population shrank.

The report also said the average monthly salary of a migrant worker climbed to 2,864 yuan last year. That is a handsome 9.8 percent raise from 2013, but the first time in five years that the increase was less than 10 percent.

Some employers have told Caixin that it has been hard to recruit employees to work in factories in some provinces, such as the south's Guangdong, since 2008 when financial crisis erupted.

The manager of a Taiwanese-invested factory in Dongguan, which is in Guangdong, said many job hunters crowded into the local labor market to look for work before the crisis, but fewer people were going there now.

He said this meant offering workers more money. His company started paying workers 1,510 yuan a month at the beginning of this year, even though the city government said this new minimum wage did not come into effect until May 1.

The former manager of a ceramics fiber company said that in 2008 migrant workers earned about 120 yuan a day, but that is up to 200 yuan now.

The statistics bureau report says more migrant workers are looking for jobs in their own province. Some 105.7 million of them were working close to home at the end of last year, 2.8 percent more than a year earlier.

Dai Jianzhong, a researcher at the Beijing Academy of Social Sciences, said this is because many companies are moving to central and western provinces, such as Hunan and Sichuan.

Some 56.6 percent of migrant workers were employed in manufacturing jobs last year, down 0.2 percent from 2013; 42.9 percent were in the services industries, up 0.3 percent.

Zhang Libin, a researcher of the Ministry of Human Resources and Social Security, said this is the result of the country reducing excess and outmoded production capacity by closing or merging companies. For example, many small coal mines have been closed due to safety and environmental protection concerns, she said.