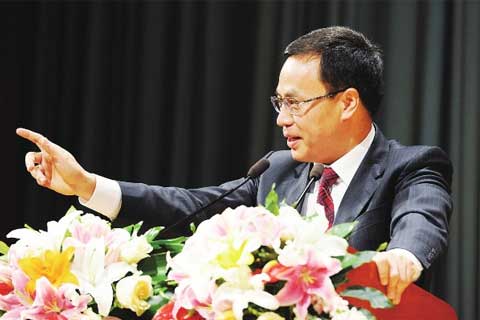 (Hong Kong and Beijing) – The solar panel manufacturer whose listed subsidiary has suffered a sell-off of shares in Hong Kong failed to repay bank loans, sources close to the parent company say.

The steepest falls were seen in the last 25 minutes, before the company was forced to suspend trading at 10:40 a.m. Some 175 million shares had changed hands by then, the share's highest daily trading volume since April 24.

Trading of stock in Hanergy Thin Film Power remained suspended on May 21.

The firm is the listed arm of Hanergy Holding Group Ltd., which is based in Beijing and has as its chairman Li Hejun, the country's richest man before the sell-off.

Li's fortune, which includes 31.25 billion shares in Hanergy, was estimated by the monthly magazine Hurun Report at 165 billion yuan, or about US$ 26 billion, in February.

The share's nose dive prompted speculation the company is being investigated by Hong Kong's securities regulator, the Securities and Futures Commission, over market manipulation.

Neither the regulator nor Hong Kong Exchanges and Clearing, which runs the former British colony's stock market, have commented.

Several people close to Hanergy Holding Group said it used shares in its listed unit to take out bank loans, but has been unable to repay some of them. The share sales escalated after debtors made little progress in negotiations with the company over the defaults, those sources said.

Hanergy secured loans from Jinzhou Bank, in the northeastern province of Liaoning, in the second half of last year after the bank gave it an 8 billion yuan credit line, other people close to the firm said. In January last year, Hanergy reached a deal with China Minsheng Bank and a credit consortium the bank leads to provide the company with loans of no less than 20 billion yuan.

However, a senior executive at Minsheng said it had not extended any loans to Hanergy. "We've studied the company carefully and found it relies too much on connected transactions between the parent company and its listed unit, so we have been vigilant over its operations," the bank executive said.

Shares in the solar panel manufacturer soared 249.1 per cent over 12 months to a high of HK$9.07 on March 5. The stock has been popular among mainland investors using the so-called Shanghai-Hong Kong Stock Connect.

Analysts had warned the shares came with risks because the company relied heavily on connected deals with its parent company, a practice that can lead to accusations of market manipulation.

Li, Hanergy Holding Group's chairman, said in an earlier interview that connected transactions accounted for 62 percent of its listed arm's business. He pledged that the company would make a breakthrough in reducing the number of such transactions this year.

Hanergy has not commented on the dive in its share price. It began shortly after shareholders gathered in Hong Kong for an annual meeting that Li did not attend. Frank Dai Mingfang, the firm's vice chairman, abruptly left the meeting after receiving a phone call.