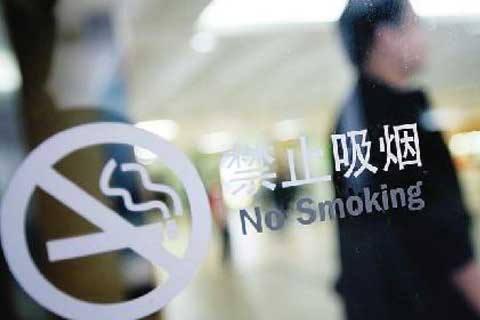 (Beijing) – The Chinese capital's more than 4 million smokers consume an average of 14.6 million cigarettes a day, says a report issued just before Beijing starts enforcing its strictest ever ban against people lighting up indoors.

An official body that coordinates health affairs among government bureaus called the Beijing Patriotic Health Campaign Committee carried out a survey from May to December last year to learn more about the capital's smokers, such as where they like to light up and what they understood about the health risks. A report on the findings was published on May 20.

While most people said they know smoking can cause lung cancer, less than half knew that strokes and erectile dysfunction were other health issues related to the habit.

The report said people visiting bars and nightclubs had an 89.5 percent chance of inhaling secondhand smoke; the figure for restaurants was 65.7 percent and that for homes was 39.8 percent. Men's washrooms and building stairwells were among the places people commonly light up.

The committee is cooperating with the city's health commission to enforce a ban on smoking in all indoor and outdoor public places that comes into effect on June 1. The ban is the result of legislation passed by Beijing's people's congress in November.

People caught breaking the new rules can be fined up to 200 yuan by law enforcement officers. Venue operators can be fined from 2,000 yuan to 10,000 yuan.

The city government has set up a hotline, 12320, so members of the public can report smokers. The government will have law enforcement officers make patrols to help implement the ban.

Beijing actually has rules in place saying smoking in public areas is illegal, but they are ignored. A ban came into effect on May 15, 1996, and in 2008 – the year China hosted the Olympics – the capital included more public places in the rules.

Yang Gonghuan, the former deputy director of the Chinese Center for Disease Control and Prevention and an advocate of tobacco control, said poor law enforcement was to blame for these rules being ignored.

The central government is also taking steps to try to clamp down on the country's huge smoking habit. On May 8, the Ministry of Finance and the State Administration of Taxation raised a tax on tobacco wholesalers from 5 percent of total sales to 11 percent, a change the government hopes will make smoking more expensive for individuals.

China signed the World Health Organization's Framework Convention on Tobacco Control, an international treaty intended to reduce tobacco-related diseases and deaths, in 2003, and the convention went into effect in 2006. However, the country still has over 300 million smokers, and more than 1 million people die of tobacco-related diseases a year, government data show.