Buy Me the Sky 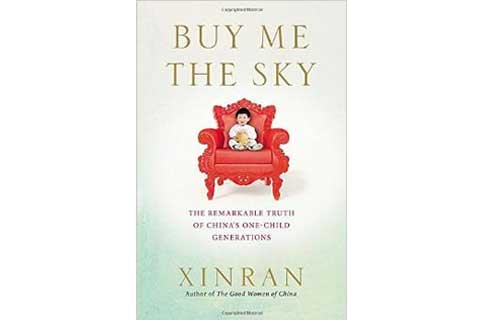 One of China's most controversial policies has been its attempt to control population growth by restricting most parents – in practice, the majority of urban parents and some rural ones – to a single child. This resulting predominance of "only children" has had significant consequences for Chinese society.

Buy Me The Sky: The Remarkable Truth of China's One-Child Generations is the latest book from Xinran, the London-based Chinese author of several best-selling titles exploring aspects of her homeland, including The Good Women of China, Sky Burial, and Miss Chopsticks. In this newly-released book, she uses biographies and anecdotes supplied by Chinese only children, all now adults, to explore the impact of the one-child policy.

I met Xinran in Singapore, and I asked her why she chose to examine the one-child policy through anecdote: "I call the book an invitation to the world, from my subjects. The subjects are inviting people to listen to them speak in their own voices. Too often people judge China's only children. They say only children think this, or only children say that. I wanted to discuss only children without judgment, to let them speak for themselves, and say what they think about their lives, about their loneliness inside, without criticism."

Chinese families traditionally value boys over girls. Xinran put it to me this way: bringing up a girl is like watering another family's tree, by which she meant that all the love and care parents may lavish on a girl, all the investment they may make in her, would be wasted when she went off to marry.

I asked Xinran if this tendency to think of girls as second-class children is changing in the light of the one-child policy: "You can't treat China as one entity, it is as vast as Europe, with great variation within it. You need to distinguish between the city and the countryside. In the cities, the value and status of girls has increased under the one-child policy. Urban parents have been weathered by modern life; their traditional beliefs have been worn away. But this is not so in the countryside – and not even amongst rural parents working in the cities. Taxi drivers in the big cities are all from the countryside, but when you talk to them, they are all desperate for sons, waiting for sons, despite their exposure to city ways. In the countryside, the one-child policy has not improved the lot of girls."

Worse, in the countryside, the abortion of female fetuses and infanticide or abandonment of girl babies have become facts of life under the one-child policy, leading to a big male-female sex imbalance. Xinran told me that by 2025, China will have 30 million more boys than girls. In the long term, the shortfall should push up the value of girls, even in the countryside, as all those boys will need wives. In the short term, Chinese men are already having to marry women from other countries in Asia: Vietnam, Thailand, Korea and Malaysia.

I suggested to Xinran that surely the one child policy would have to be cancelled soon, because no society could continue with such a sex imbalance: "I do think it will be stopped soon, but not so much because of the sex imbalance but for other reasons, such as society structure. Chinese society has been shaped by family. The one child policy turns the whole structure upside down. Six adults – two parents and four grandparents – all focused on one child. With the Chinese emphasis on family I don't think the one child policy can continue. Then there is the issue of national defense. No parents are going to be willing to see their only child off to war, therefore in future the nation will not be able to defend itself. I tell people they have no need to worry about China's military ambitions, the parents of only children will ensure it is a peaceable nation."

The harrowing burden of worry having an only child places on a mother is one of the recurring themes of Buy Me The Sky. When only children grow up, the burden of worry reverses direction: the younger generation now worries for the older one; only children have no brothers or sisters with whom to share this worry. Xinran told me that one of her subjects, Firewood, unmarried, and unusual among her subjects in coming from a peasant background, has taken on full responsibility for care of his uneducated, village-dwelling and widowed mother; he hardly dares leave her, because she's become addicted to television, and to buying things on her mobile phone, so he has to cancel her purchases each evening.

More generally, the skewed demographics produced by the one-child policy mean there are too few young people to support an aging population. Xinran agreed this was a source of stress for only children. "It's part of the loneliness inside only children feel – this fear that they will not be able to support their parents and grandparents." She pointed out that unlike the UK, China has no welfare safety net between the government and the family; she said that caring for older generations was a struggle for several other of her subjects, not only for Firewood. Many of her subjects now live outside China, some of them fly back regularly from London, just for a weekend, to fulfill their filial obligations.

Regardless of demographics, I asked whether only children are themselves clamoring to have more than one child. Xinran again distinguished between the countryside and the cities, and she said she thought it unlikely in the cities. She explained that recently the rules have been relaxed, so if urban parents are both themselves only children, they can have two children. But she said few were choosing to do so, often because of the expense of bringing up a child in the city. In some cases, she said, adolescent only children were pressuring their parents not to add to the family.

She told me about a recent incident when a thirteen-year-old only daughter threatened suicide if her parents displaced her at the center of their world, by having a second child, and she added there have since been two suicides from only children who thought their parents were being stolen by a sibling.