Relatives of Tourists on Capsized Ship Angered by Lack of Information 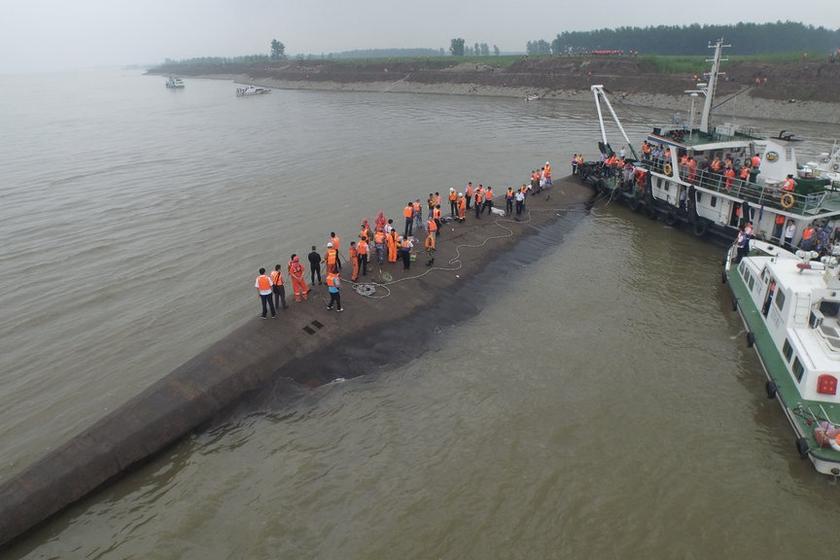 (Beijing) – More than 400 passengers on a cruise ship that capsized in the Yangtze River on June 1 are still missing, and relatives say they are angry about a lack of information and help from the government.

The 76-meter Dongfang Zhixing, or Eastern Star, was making a 10-day trip from the coastal city of Nanjing to the southwestern city of Chongqing when it overturned on June 1. It capsized in Jianli County, in the central province of Hubei, about 9:30 p.m. on June 1.

Some 456 people, including 46 crew members and five tour guides, were on the vessel. Fourteen people have been rescued as of noon on June 3, the official Xinhua News Agency said. The bodies of 19 others have been recovered. (State media earlier reported that 18 people were rescued, a figure that now appears wrong.)

As rescue efforts inch ahead – including by cutting through the vessel's exposed hull – relatives of the missing say they are growing frustrated by a lack of information from authorities. On June 2, more than 20 relatives of missing passengers from Shanghai went to the office of the tour company, Xiehe Travel, that organized the Eastern Star's trip, but it was closed.

They waited there until midday, when a low-ranking government official arrived to take them to a complaints office. Some 100 people gathered there over the next few hours, but little happened.

By 3:30 p.m. the crowd grew angry and demanded information. Government employees at the complaints office told them they had to continue waiting because officials were in a meeting.

"They should at least tell us what they plan to do and if we should stay for more information or go home," one relative said.

About midnight, employees of the tour company showed up with police officers to provide information about volunteers in Hubei who would take relatives to the area where the ship overturned, if they want to make the trip on their own.

However, many people said they wanted authorities to organize trips as soon as possible.

"I have five family members on the ship, I've got to go there," another relative of a missing person said.

In Nanjing, the relatives of about 100 of the tourists on the ill-fated vessel waited at a hotel for information on June 2. They wanted to go to Hubei on trips that local officials said they would organize, but were frustrated they had not left yet.

One relative said he asked officials why the ship was allowed to travel in bad weather, but did not get an answer.

The National Meteorological Center, which is run by the China Meteorological Administration (CMA), said on its website on the morning on June 2 that the Jianli County area of the river was hit by a tornado that lasted for 15 to 20 minutes.

The ship's captain, who was rescued and is in police custody, has said the vessel listed to its right when it was hit by "long juan feng," meaning tornado.

A CMA scientist who has visited Jianli County said physical evidence on the ground indicates a tornado struck the area. Tornados are rare in Hubei, but they do occur.

Shanghai resident Zhang Jianwei said his wife called him from the Eastern Star about 9 p.m. on June 1 to say the vessel was in a heavy rainstorm. It was the last Zhang heard from his wife.

The ship tracking website Myship.com said the vessel turned just before it capsized. An analyst said that a ship as large the as Eastern Star is unlikely to change course due to wind, and the captain may have ordered the turn, causing the vessel to capsize.

Since the Three Gorges Dam opened on the Yangtze in 2008, many scenic spots along China's longest river have been submerged, and the popularity of tourists trips like the Eastern Star's have diminished.

Tour companies engaged in a price war in 2013 to lure customers, a ship operator told domestic media, resulting in the quality of service and level of vessels' maintenance declining.