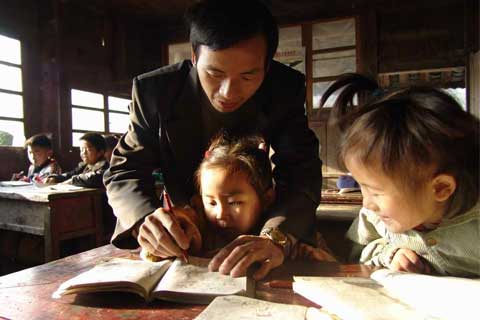 The plan, which was announced on June 8, presents ways to attract more qualified teachers to rural schools, particularly in remote central and western regions where economic development trails that in China's east.

One of the most important aspects of the plan is the cabinet's announcement that rural teachers will be paid the same as their counterparts in big cities. College graduates can also have student loans waived if they go to teach at a rural school for a certain period.

The State Council also said that teachers seeking promotions must first serve at a rural school or one with fewer resources than other schools. Distinguished teachers from urban areas will also be offered incentives to work at rural schools after they retire.

China has 3.3 million teachers in rural areas, according to official statistics, but many are in their late 40s or early 50s and have little training. They also earn much less than their counterparts in urban areas. Many teachers in rural schools must teach several subjects to offset a shortage of educators, but this often comes at the expense of quality.

A sharp drop in the number of rural students attending university in recent years has alarmed academics over a gap between the quality of teaching in rural and urban areas.

"To narrow the divide, rural teachers must at least be given the same level of benefits because it is harder and much more painstaking to teach at rural schools," he said. "It's very difficult for rural schools to attract good teachers, if the teachers there cannot get paid at least the same as what teachers at urban schools get."