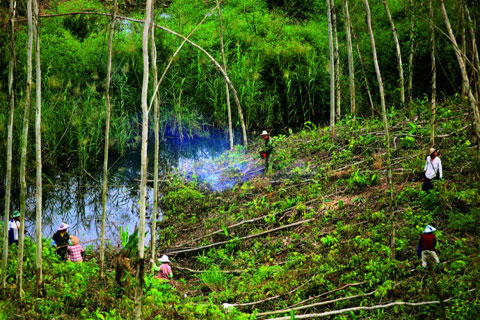 (Beijing) – China is rolling out a series of bans aimed at protecting more of its forests, a forestry official says.

Zhang Jianlong, deputy director of the State Forestry Administration, said a logging ban has already been put in place in some key areas, especially in the country's three northeastern provinces, on trial basis this year.

The prohibition will be extended to all state-owned forests next year, and logging on privately owned land will be stopped by the end of 2017, he said. The bans will cut timber output by 50 million cubic meters per year – the equivalent of 30 percent of logs, Zhang said.

Zhang said China produces 70 to 80 percent of the world's wood furniture and half of its wood products, including particle board and fiberboard, but this cannot continue. "Our ecosystem has become so bad that it is no longer sustainable for China to continue serving as a world factory for wood products," he said.

To offset the shortfall in timber production – and perhaps even increase it – the forestry administration will plant 14.7 million hectare of trees over the next few years, mostly in the south. It hopes that this planting yields 95 million cubic meters of timber per year within the next five to eight years.

The country will also continue to rely on imports, Zhang said. By 2020, imports will account for more than 40 percent of China's timber consumption.