Is China Knocking on Deflation's Door? 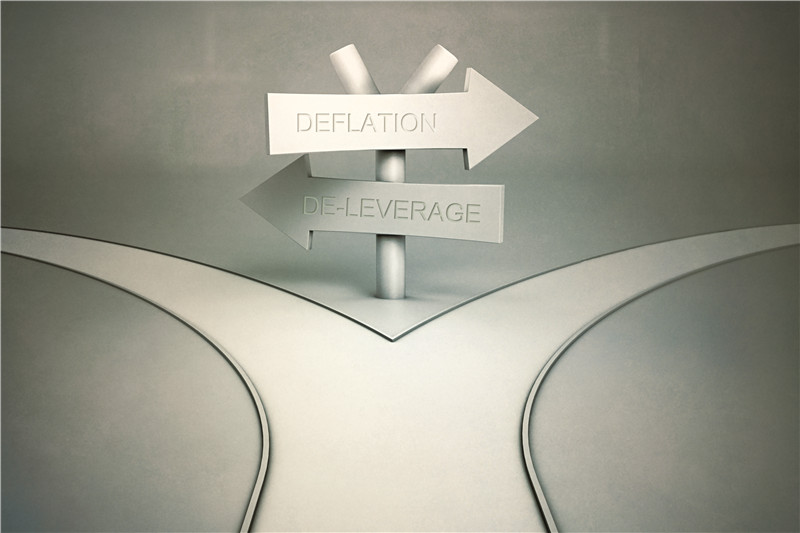 The central government responded by launching economic and administrative reforms, hastening steps for joining the World Trade Organization, and steering public funds into infrastructure projects. The efforts paid off quickly: in a couple of years, the war was over and the economy was growing again.

Today, many economists think China may be on the threshold of a fresh bout with deflation. For that reason, policymakers are looking back at what happened in 1998, reviewing notes and drafting plans for what could be another tough battle.

Deflation fears have been spreading in recent months while the economic slowdown – the so-called new normal – continues with no end in sight. The GDP growth rate has been falling since 2010, and according to various financial institutions could end 2015 at less than 7 percent, the lowest in more than two decades.

April was the 38th straight month for a decline in PPI and came two months after a 4.8 percent decline year-on-year – its steepest plunge since 2009.

CPI is also trending lower. The National Bureau of Statistics (NBS) said on June 9 that CPI fell to 1.2 percent in May, year-on-year, from 1.5 percent the previous month. The government has set a 2015 CPI target of 3 percent.

Meanwhile, the GDP deflator – an inflation indicator some economists say is more accurate than CPI – fell 1.1 percent year-on-year in the first quarter, according to the NBS.

Zhang Bing, an economic researcher at the China Academy of Social Sciences (CASS), is offering a simple interpretation of these economic statistics: He thinks China "is on the verge of deflation."

If deflation is indeed knocking on China's door, as many economists believe, policymakers may take a cue from the government's previous response by embracing monetary policy measures designed to stimulate the economy.

One possible measure would involve monetary easing. Talk of this possibility has raised concerns that China might be forced to adopt quantitative easing, following in the footsteps of the United States, Europe Union and Japan. Many of these concerns revolve around potentially negative effects of the strategy, such as the potential for more and riskier debt.

China saw debt levels surge after the 2009 financial crisis, especially among local governments that financed infrastructure projects by borrowing from banks. Even today, a lot of that debt is still around.

Some economists say the country should respond to threats of deflation by cutting benchmark interest rates and the mandatory reserve ratios that the government sets for banks. But they wonder whether the government has the capacity to follow such cuts with deeper reforms without compromising macroeconomic controls.

Other economists say policymakers have for good reason historically avoided interest rate adjustments. A key reason for their hands-off approach, said Song Guoqing, a professor at the National School of Development at Peking University, is that the positive effects of interest rate adjustments can be easily offset and undermined by CPI fluctuations.

Some economists say existing government debt would inhibit the effectiveness of government policies, such as stimulus measures aimed at promoting investment. It is thus difficult for policymakers to simultaneously fight deflation and promote deleveraging, they argue. And many economists have warned that any monetary easing, taking aim at deflation may actually intensify debt problems.

Bai Chongen, an economics professor at Tsinghua University, is concerned about possible negative side-effects if the government embarks on a policy of monetary easing. Besides, in his opinion, interest rates have effectively risen given the government-dominated investment structure.

Interest rate fluctuations generally do not affect government-backed investments, Bai said, but can squeeze non-state investors out of the market. And if private investors are scared off, he said, the government has to increase its investment spending in order to reach growth targets.

"To end this vicious cycle, non-state investment should be encouraged" by cutting financing costs, Bai said. Such measures would "cut demand for government investment."

Yu Yongding, a CASS professor, recommends that China adjust its economic structure and that the government take a cautious approach to economic stimulus. Under the current structure, Yu said, banks prefer to issue low-risk, high-return loans to state-run companies. That means any policy that increases the money supply effectively supports state-owned assets, but does little for the rest of the economy.

And there's no guarantee that a greater money supply will lead to more lending. CASS' Zhang said banks have not significantly stepped up lending as a result of recent money supply injections by the central bank. Nor have they been swayed by relatively low inter-bank lending rates.

Zheng Jingping, deputy director at the NBS, said the government should reduce financing risks by balancing its monetary easing policy against the need to address local government debt and industrial overcapacity.

"The current problem is that the easing of monetary controls cannot be translated into credit supply," Zheng said. "Interest rate and reserve requirement cuts are still needed. And an interest rate cut would be better."

The government's goal "during the process," said Zheng, "is to push forward structural reforms."

According to the state-run People's Daily newspaper, China's overall debt level is around 176 percent of GDP, which is 63 percentage points higher than it was when the global financial crisis broke out in 2008. The average debt load for companies outside the financial sector has risen quickly and is at 125 percent of GDP.

Yi Gang, deputy governor of the central bank, said policymakers have to find a way to control deflation and debt risks. He predicted that leverage levels will continue rising for a spell, but that the debt growth rate should be kept under control. Ever-higher leverage can help economic growth only to a point, he argued, before it starts to stifle growth. "The question is how fast will it rise, and what is the best speed?" Yi asked.

Since February, the central bank has cut benchmark interest rates and bank reserve ratios. But money supply and investment growth have slowed.

M2, a broad measure of money supply, increased 10.1 percent year-on-year in April. That growth rate was down 1.5 percent from March. During the first four months of 2015, according to the NBS, fixed-asset investment in the country grew 12 percent from the same period last year.

The NBS said major industrial enterprises saw their profits decline an average 1.3 percent in the first four months of 2015 compared to the same period last year. These declines were mainly due to weak demand in the petrochemical, coal, steel and construction materials sectors.

Even the financial sector is under a cloud of falling demand and higher credit risks among their customers, particularly companies whose goods are commanding lower prices.

Underscoring the current deflationary danger, Zhang said a credit crunch is looming and profits are falling for manufacturers whose goods are selling for less than in the recent past. Many firms have seen their return on assets fall below financing costs, he said, which means "companies and local governments are facing balance sheet challenges."

In addition to reviewing notes from the country's previous victory, policymakers have been studying how other nations have approached deflation with a view to using what works. Yi said "sound results" can be achieved by using "a combination of various tools ... in a proper and timely manner."

Countries in the euro zone adopted more aggressive measures after a 2011 debt crisis by adopting austerity measures that cut loan demand. That approach was later blamed for triggering deflation and an economic slowdown.

Some economists say China's moves should include steps that encourage urbanization, improve public services and support those industries that invest in upgrading operations. They have also called for more reforms of government and state-owned enterprises.

But Yi said more fundamental efforts are needed in response to the threat of deflation. For example, he suggests helping companies improve the quality of their assets, do more to protect property rights and enhance the capital market.

Other economists say there is never a need to fear deflation as long as CPI is rising. In particular, they argue, unless pork prices fall there is no reason to entertain deflationary fears since, as a dinner table staple in China, pork is a key factor in CPI data.

Officials such as Yi are also downplaying the deflation threat. "If only measured by CPI, China has not seen deflation," Yi said at a May 23 conference with economists.

Zhang Ping, deputy director of the CASS Institute of Economics, said CPI statistics alone should not be used to determine whether deflation is affecting the economy. That's because the economy is more closely tied to manufacturing and investment than consumer spending. Zhang thinks PPI data should be factored into any analysis of deflationary trends.

But Liu Xiangyun, the central bank's research bureau deputy director, said PPI can be volatile and is seldom used around the world as an indicator of deflation. Liu said that commodity price and currency exchange rate factors have caused the PPI to fall in Japan even during periods of high GDP growth.

Moreover, a company can post healthy profits even when producer prices are falling. That is exactly what happened in 2010 when many Chinese enterprises saw their earnings rise in part due to the government's economic policy adjustments, even while producer prices were declining.

"Attention should be paid to whether the latest decline in (producer) prices is a result of efficiencies led by Internet development and innovation," said Fan Gang, director of the China Reform Foundation's National Economic Research Institute,

Moreover, Fan said, PPI can fluctuate as commodity prices change and industrial overcapacity affects companies. These issues are especially important for companies in the petrochemical, coal, steel and construction materials sectors, which comprise four-fifths of the country's PPI calculations.