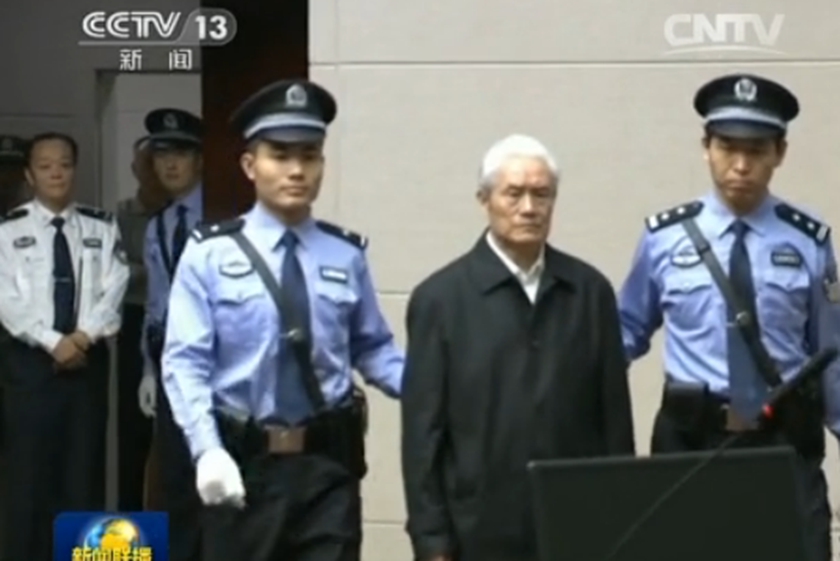 (Beijing) – Zhou Yongkang, who once headed the domestic security apparatus as one of China's most powerful people, has been sentenced to life in prison for taking bribes, abusing his power and leaking state secrets, the official Xinhua news agency said on June 11.

Zhou, 73, who had a seat on the ruling Communist Party's all-powerful Politburo Standing Committee before retiring in 2012, was handed the sentence by the Tianjin No. 1 Intermediate People's Court.

He becomes the highest-ranking party figure to be prosecuted since the Gang of Four was deposed in the late 1970s, paving the way for Deng Xiaoping to launch China's reform and opening to the outside world.

Zhou's trial was held on May 22 behind closed doors because it involved state secrets, Xinhua said. He reportedly pleaded guilty and will not appeal. The court convicted him of taking 130 million yuan worth of bribes via his wife, Jia Xiaoye, and son, Zhou Bin.

He received cash and assets worth 731,100 yuan from Jiang, who headed the State-owned Assets Supervision and Administration Commission before his own downfall in 2013, the news agency said. Before taking the reins at the regulator of state-owned assets, Jiang was chairman of China National Petroleum Corp.

Wu is a businessman in Sichuan, and Ding was once mayor of Luliang, in the northern province of Shanxi. Both Wen and Zhou Hao were senior executives at the state-owned oil company.

The Central Commission for Discipline Inspection, the Communist Party's graft buster, said on July 29 it was investigating Zhou. The Politburo Standing Committee decided on December 5 to expel Zhou from the party and handed his case to the courts.

Zhou is the highest-profile person to run afoul of a crackdown on corruption that the party's general secretary, Xi Jinping, launched shortly after taking power in late 2012.