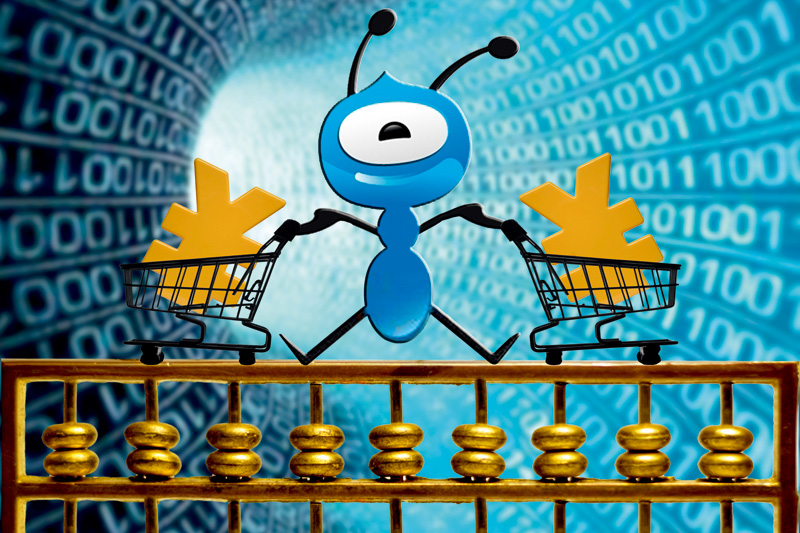 The recently completed private placement, details of which Caixin obtained from sources close to the matter and business registration documents, has valued Ant Financial Services Group at more than US$ 40 billion, which would make it one of the world's most valuable privately held Internet companies.

"Ant Financial is looking to create a strong, driving force for the global Internet finance industry and build a new business ecosystem to achieve inclusive finance in the truest sense," Jing said.

A business license document filed with the State Administration for Industry and Commerce named the eight investors who now control about 8 percent of the firm. The largest backer is the National Social Security Fund (NSSF), which paid more than 7 billion yuan for a 5 percent stake.

The deal with Ant Financial is NSSF's first direct equity investment in a private company, said Jing. The pension fund was rewarded for its support, he said, through a placement package discount aimed at helping the general public gain from Ant Financial's growth.

More investors appear to be waiting in the wings. State-run Postal Savings Bank of China is negotiating for a piece of Ant Financial, people close to the firm said. Also showing interest is the nation's sovereign wealth fund, China Investment Corp.

Some 37.5 percent of Ant Financial's annual before-tax revenues are turned over to Alibaba every year, according the prospectus filed last year for Alibaba's public listing on the New York Stock Exchange.

Alibaba has an option to buy into Ant Financial again and become its largest shareholder if the Ant Financial goes public, the prospectus said.

A 2013 document about the company's establishment said Ant Financial employees' would own 40 percent of the company.

Jing said the firm may launch more private fundraisers while working toward a public listing for which "there is no timetable yet."

The latest private placement points to the potential for strong investor appetite in the future. The amount raised was some 10 times the firm's registered capital of 1.2 billion yuan.

Although Ant Financial does not share its financial reports with the public, people close to the matter said that the firm's predecessor under Alibaba posted a profit of about 2 billion yuan in 2013.

Alipay also controls the country's largest wealth management fund, Yu E Bao, which launched in February 2014 and has boomed thanks to public investor enthusiasm for high-yield products. Yu E Bao was managing 613 billion yuan in June, down from more than 700 billion yuan in March, a decline blamed on falling interest rates.

Ant Financial has registered some 400 million clients, including 200 million wealth management accounts. Some four-fifths of those clients manage their accounts through mobile devices. And it handles an average 120 million transactions every day.

Not only are Ant Financial and Alipay close to Alibaba, but they are also powerful business partners to banks thanks to their "great customer resources," said a person in the banking industry who asked not to be named. Revenues generated for banks through these partnerships are relatively small, the person said, but they are especially valuable for their ability "to reach more customers."

Ant Financial executives said the firm wants to adjust Alipay's business focus so that it is not only a payment service provider but an online payments platform for a variety of offline partners such as restaurants, entertainment venues and health care providers. Liu Lejun, head of Ant Financial's mobile Internet business department, said the firm would thus like to concentrate on this so-called online-to-offline, or O2O, sector as well as wealth management products.

To supplement Yu E Bao, Alipay has been operating a wealth management platform called Zhao Cai Bao since April last year. The platform offers products through tie-ups with fund companies that, according to an Ant Financial employee, aims for yields higher than those offered by Yue E Bao. Several new products are slated for launch on Zhao Cai Bao before August, Jing said.

Ant Financial has been expanding its Internet-related financial services in other ways. In April, it launched a stock index that tracks shares in e-commerce companies. Its partners in the project are Bosera Asset Management Ltd., Shanghai Gildata Service Inc. and China Securities Index Co.

In May, Ant Financial won a business license in Shanghai for a crowd-funding platform. One month later, the firm bought a one-quarter stake in the company running the peer-to-peer lending website wjs.com. Ant Financial has also recently partnered with insurance companies to market insurance products.

On another front, Jing said Ant Financial is developing a new credit rating service that would be based on Alibaba's data storage technology. It also set up a 1 billion yuan fund to support high-tech start-ups and companies with innovative ideas.

"By using technologies such as mobile devices, we will have opportunities to break down many barriers," said Wang Lijuan, head of Ant Financial's O2O department.

One of the most challenging barriers between Ant Financial and its plan to list on a stock market in China or the United States is regulatory compliance.

A China Securities Regulatory Commission official who asked to remain anonymous said the firm's executives have on several occasions asked about a domestic listing.

"We surely hope that it can list on the domestic market," the official said. "But the timing will depend on its preparations and conditions."

As pioneers in the field of Internet-based financial services, Ant Financial and Alibaba sometimes have been seen as firms that challenge the government's conservative rules. MYBank was granted a license only after months of discussions over the potential risks of online-only banking.

Recently, though, Ant Financial has modified its position to reflect a more regulator-friendly image. In March, the firm announced a change in business strategy that would "embrace regulations." Motivating the decision to more closely comply with regulations is Ant Financial's hunt for new areas for business growth. Some of these changes have actually been forced upon the company by the market, said a manager at the firm who asked to remain anonymous.

"We can't play without restraint as we have before," Ant Financial CEO Peng Lei said in a speech to employees. She added that the firm has in fact "never stopped communicating with regulators."

For instance, traditional banks want to address security concerns by requiring that Alipay and similar payment services provide banks with detailed information about all transactions. But Alipay officials have refused, arguing that abiding by these demands could cost them customers.

Meanwhile, real-name registration questions have been raised by regulators who do not like the fact that Alipay lets some long-time clients maintain accounts without providing personal identification. Regulators call this practice a security risk.

Peng and other executives say innovation will always be at the heart of Ant Financial's business focus, even if that focus clashes with rules. She told company employees at a meeting last year that Ant Financial will not shy away from confrontation or even a measure of risk if that's what it takes to remain innovative.

"What will we confront while on our future journey?" Peng asked. "Nobody knows the answer."