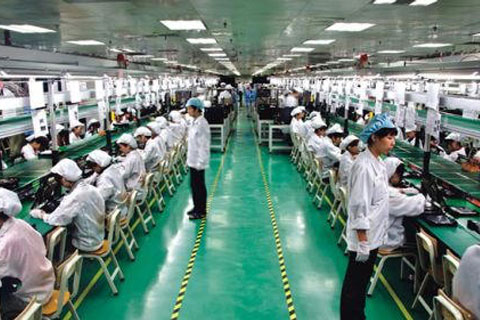 This is 0.4 points lower than the preliminary figure released in late July. The final PMI for June was 49.4, below the 50-point mark that separates growth from contraction.

The PMI for July released by the National Bureau of Statistics (NBS) on August 2 was 50. The figures for the previous four months were all above 50.

Sub-indices of both the official and Caixin-sponsored PMI results showed weaker output and a contraction in new orders, which had expanded in June.

Both indicated that manufacturers shed workers in July, though the official data suggested the employment situation had become worse, with the sub-index down 0.1 points from the previous month. The Caixin China PMI showed employment had recovered a bit from June.

An official from the NBS said the output sub-index of its PMI fell in July due to high temperatures and storms that hindered production, and because some producers were examining and upgrading their machinery.

He said the prices of major raw materials for manufacturers continued to decline in July because of recent fluctuations in the prices of oil and other major commodities.

Weak demand remained a big challenge. The sub-index of new orders in the Caixin China Manufacturing PMI fell from June by a bigger margin than any other sub-index. The official PMI's new orders sub-index showed contraction for the first time since October 2012.

The official PMI reflected weaker activities across the board for manufacturers of all sizes. Small enterprises suffered more, indicating that they did not benefit as much from the government's stimulating policies as big companies.

Recent PMI surveys showed the service sector in a better shape than the manufacturing industry. The tertiary industry has been growing at a faster pace than the primary and secondary industries, and its share of total economic output continued to increase. This trend is expected to continue.

The Caixin China Services PMI will be released August 5.