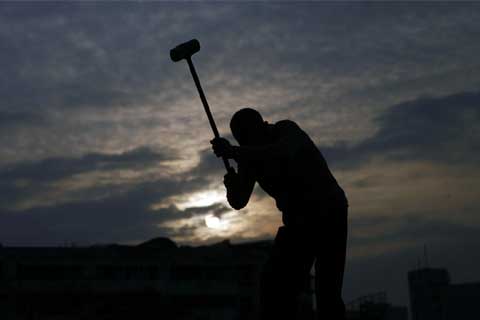 (Beijing) – China's large labor force, a key factor in the economy's three decades of rapid growth, is changing, and signs are appearing that its backbone – some 280 million migrant workers – may soon be shrinking.

The country's total number of migrant workers, the people comprising the biggest portion of the labor force, is still growing, but much slower than in the past, Yang Zhiming, deputy minister of human resources and social security, said in February. The number of migrant workers rose 1.9 percent year-on-year in 2014, a sharp decline from the 36 percent growth seen in 2010.

These changes in the labor force are beginning to impact the economy, a person close to the Ministry of Human Resources and Social Security said. "Shanghai, Guangdong and other cities have reported serious lack of workers," the source said.

Accordingly, the average monthly salary for migrant workers rose 9.8 percent in the first half this year from same period last year, to exceed 3,000 yuan. As the person close to the ministry said: "The supply and demand relationship is changing."

China's expansive rural regions have long been seen as its labor force reservoir, a source of young workers for construction sites and factories around the country. But that reservoir is drying up. In February, the total number of people leaving their rural homes for jobs in cities fell 3.6 percent from the same month last year, the first documented drop in the figure.

Meanwhile, migrant workers are aging. A report by the National Bureau of Statistics (NBS) said that from 2008 to 2014 the portion of people aged over 50 increased from 11.4 percent of total migrant workers to 17.1 percent. Some 14.6 percent more migrant workers were over 50 last year compared to 2013, the biggest increase in three years.

The head of a construction site in the eastern province of Shandong said he has noticed the change on the ground. Of the more than 1,000 workers on his site, four-fifths are aged 40 to 55; only 5 percent were 35 to 40.

This is linked to broader demographic changes in China, which has a rapidly aging population, said Zheng Dongliang, director of the Labor Science Research Institute at the human resources ministry.

The country has more than 200 million people aged over 60, official data show. Over the next two decades, that group will grow by 10 million people every year, and by 2050, 30 percent of the entire population will be older than 60.

These changes also mean that rural areas have fewer young people looking for work. An NBS spokesman said in July that "almost all young workers who can leave rural places for jobs have already migrated."

Zhang Zheng, a professor at Peking University, said that before 2004 the supply of migrant workers exceeded the demand of employers, who could then choose younger laborers and pay lower salaries. But things changed after that year, as the number of young workers, especially those under 25, has fallen.

Official data show that the country had 14.5 million fewer migrant workers aged 16 to 20 last year than in 2008, a decline of 60 percent. This has spurred employers to turn to older workers to fill positions, Zhang said.

Older workers are concentrated in the construction sector and prefer to work in urban areas near their hometowns, he said, but younger people prefer manufacturing and service jobs in distant provinces.

But even older migrant workers will soon be in short supply. "In three to four years, that remaining rural labor force will be exhausted," Zhang said.

The changing labor market picture is forcing policy makers to respond. The person close to the human resources ministry said that from 2006 to 2014 the State Council's focus on migrant workers shifted from equal employment access to public services and hukou, or household registration.

Last year, the cabinet set a goal of having 100 million people living in rural areas in the central and western parts of the country move to cities by 2020, a move aimed at giving employers the workers they need to continue to grow.

Zhang Chewei, deputy director of the Center for Human Resource Research at the Chinese Academy of Social Sciences, a major government-back think tank, said that creating a fair environment for these migrant workers, especially regarding the household registration system, is needed to help them get settled.

However, Zhang Zheng, the Peking University professors, said easing rules governing hukou – the household registration documents necessary for people to gain access to health care, schooling and other public services – will not be enough to encourage migrant workers and their relatives to move to cities. Their main concern, he said, is what they will earn.

Ultimately, the government wants migrant workers to settle down in smaller cities in central and western regions instead of just the big cities in the east, creating more balanced development among regions.

"We can't concentrate the entire labor force in costal regions since this creates many social issues, such as holiday travel rushes, children being left behind in rural areas and caring for the elderly," the person close to the human resources ministry said.

But for now, most migrant workers still head to large big cities in seek of higher pay and better opportunities. As one worker said: "There are only a few good companies and factories at home. I can earn more (in big cities) and save more."