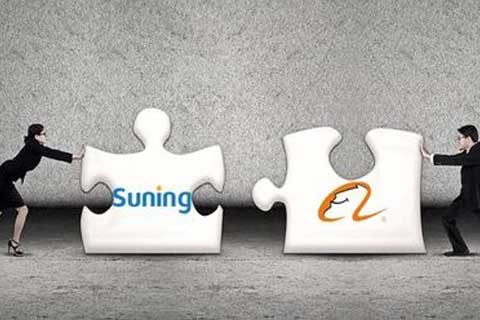 The deal will see Alibaba get a 19.99 percent stake in Suning, making it the second-largest shareholder after chairman Zhang Jindong, who owns 24.29 percent. Alibaba can name two directors to Suning's nine-member board.

The deal will also see Suning invest 14 billion yuan for around 1.09 percent of Alibaba's shares.

The companies' shareholders and government authorities will need to approve the deal.

The two firms have been working on the deal for the past two months, a person close to the matter said. They will also exchange shares to complete part of the investment.

The two companies said they will cooperate in e-commerce, logistics and financial services. Consumers buying products on Alibaba's websites can get sales service at Suning's stores, and Suning will open a flagship store on Tmall.com, one of Alibaba's major shopping sites.

Shoppers can also use Alibaba's payment service, Alipay, and get other financial services at Suning's shops, said an executive from Ant Financial Services Group, which is affiliated to Alibaba.

Wang Xiaoxing, an analyst at the Internet data provider EnfoDesk, said both companies saw advantages in the other, such as Alibaba's strengths in e-commerce and financial services and Suning's logistics and physical stores.

Data from iResearch Consulting Group showed that last year Tmall.com had more than 60 percent of the business-to-consumer market, in which companies sell directly to consumers. JD.com had 18.6 percent and Suning 3.2 percent.

Suning had more than 4 million square meters of warehouse, 660 logistics centers, 2,721 delivery outlets and 287 service stations in rural areas at the end of June. The company's president, Sun Weimin, said it can deliver goods to consumers within two days in 90 percent of China's cities.

Alibaba has recently been trying to expand into the so-called online-to-offline business. It invested 6 billion yuan on June 23 in the mobile application Taodiandian, which allows people to book meals online. In May, Alibaba launched an app called Miaojie that tells consumers about sales at nearby stores.