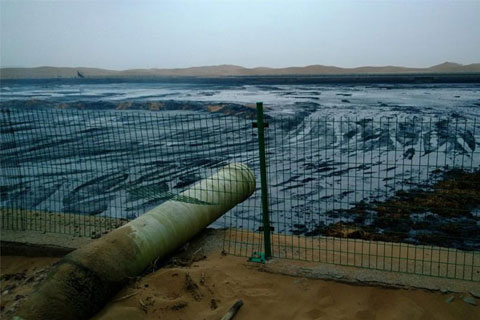 (Beijing) – The Ministry of Environmental Protection has held an emergency meeting with executives from Beijing's only sewage treatment company over concerns it mishandles tons of sludge every day that could harm public health.

Officials from the ministry's Bureau of Environmental Supervision summoned executives from the Beijing Drainage Group for a meeting on August 17 after it learned that the company has left untreated tons of sludge left over from the sewage treatment process, the China Environment News reported.

The newspaper, which is affiliated with the environmental ministry, said the government discovered that the company processes only one-tenth of the 2,800 tons of sludge it churns out every day and most of the hazardous material is dumped in poorly built sites where it sits untreated.

Beijing Drainage Group is a state-owned company affiliated with the government of the capital. It runs sewage treatment plants across the city.

Ministry officials said they surveyed dump sites owned by the company in the Beijing districts of Daxing, Fangshan and Shunyi, finding that they are so poorly built they pose a risk to public health and the environment. The sites are constant sources of foul odors, officials said.

The unprocessed sludge contains organic materials, bacteria, microorganisms and heavy metals. In other countries it is turned into fertilizer through proper processing involving removing water and toxic chemicals.

Beijing Drainage Group officials said at the meeting it will look into the problem and try to find ways to better treat the sludge.

In 2013, Caixin reported that tons of unprocessed sludge from Beijing Drainage Group facilities was being hauled to neighboring Hebei Province where it was dumped on farms and in forests. Watermelons and other crops were grown on land where sludge was dumped and then sold to consumers. Later inquiries found that the dumping had continued.

The levels of chemical oxygen demand, a measurement of organic pollutants, ammonia and nitrogen in recycled water from a plant in Beijing's Tongzhou District all exceeded national standards, officials said.