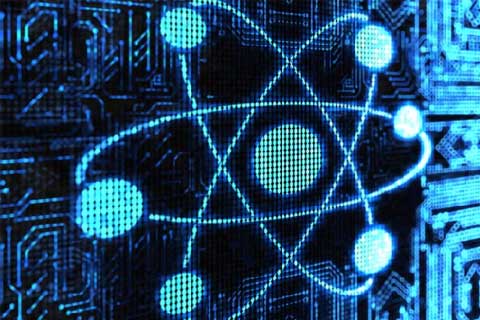 (Beijing) – Building a quantum computer that processes data at speeds trillions of times faster than the world's fastest computer, China's supercomputer Tianhe-2, is the goal of a potentially game-changing venture launched by Alibaba Group Holding Ltd. and the Chinese Academy of Sciences (CAS).

If the project succeeds, the enormous impact of a lightning-speed computer based in China could make all of the advances wrought by computerization worldwide over the past five decades look like baby steps.

Quantum computer technology has been a key focus in recent years for researchers at tech companies and governments around the world. Investing heavily in the search for ever-faster data processing based on quantum mechanics have been Microsoft Corp., Google Inc., International Business Machines Corp. and major research agencies.

The U.S. government's space agency, NASA, has partnered since 2013 with Google and the Universities Space Research Association to conduct research at the Quantum Artificial Intelligence Lab in Silicon Valley.

Alibaba has now become the first tech firm in China to join the international quest for commercial applications of accelerated computational capacity on a massive scale. The e-commerce giant did so by announcing in late July that its cloud-computing unit, Aliyun, had formed a 15-year partnership with CAS, a major government research body, to open the Alibaba Quantum Computing Laboratory in Shanghai.

Lab supporters hope the country's next-generation computer will feature not only tremendous computing capacity but potentially foolproof cryptography. A quantum computer could also offer fine-tuned processing for a variety of applications, from weather forecasting and stock market analysis to astronomical research.

Alibaba pledged to support the lab with 30 million yuan a year over the next five years. A renowned quantum physics scientist, Pan Jianwei, was hired to serve as the lab's lead scientist.

Alibaba and CAS said in a statement that researchers will work to overcome major technological hurdles that restrict quantum computing and build quantum simulations of today's fastest computers. By 2030, the lab is expected to have developed a general-purpose, quantum computer prototype with 50 to 100 "quantum bits," also called "qubits," the basic units of quantum information.

Lu Zhaoyang, a researcher at the Alibaba-CAS lab and professor of quantum physics at the University of Science and Technology of China in Hefei, in the eastern province of Anhui, said a quantum computation that uses 45 qubits would be equivalent to the calculation capacity of the Tianhe-2. This means that a quantum computer capable of processing hundreds of cubits or more would leave a traditional supercomputer in the dust.

Alibaba's investment in the lab falls far short of what other big companies have spent on similar research. IBM, for example, has committed US$ 3 billion since 2014. But Alibaba's initiative is the largest-ever investment in a major scientific initiative by a private company in China. And it's a groundbreaking move, as historically major companies in the country rarely if ever get involved in cutting-edge scientific research.

The lab's directors plan to recruit leading scientists from around the world to join Pan's quantum computing research team. They also plan to tap Aliyun's commercial expertise in the area of cloud computing.

"The laboratory will combine the technical advantages that Aliyun has in classical calculation algorithms, structures and cloud computing with those of CAS in the areas of quantum computing, quantum analog computing and quantum artificial intelligence," the Alibaba-CAS statement said.

The lab's scientists will be aiming to "break the bottlenecks of Moore's Law and classic computing," the statement said. Moore's Law is a prediction made by American businessman, Gordon Moore, in 1965, claiming classical computers' speed is decided by the number of transistors they have, and that number doubles every two years. The law accurately described the development of computing power over the past decades, but quantum computing may change the picture of the future.

Cloud computing technology, which is commonly used commercially, has enhanced the value of data processing capacity. And for companies such as Aliyun, anything that can accelerate data crunching and expand data storage is a good investment target.

Wang Jian, Alibaba's chief technology officer, said quantum computing will likely extend the technology's reach into new fields by improving communications and overcoming computational barriers, which are the top technological concerns of companies whose businesses rely on the Internet.

Alibaba will benefit from research at the new lab by getting access to future technological developments at the ground level, he said.

About two years ago, long before the plan for a new lab emerged, Alibaba officials had sought out Pan and his team. They wanted the scientists to help them find commercial applications for quantum computing. "We approached them at first" for negotiations, Wang said. But the talks went nowhere. Alibaba officials eventually had to admit that the technology was too immature for commercialization.

Companies worldwide hoping to benefit from quantum computing have come face-to-face with a variety of barriers, the biggest of which are money and time.

Quantum computing research is not only costly but also time-consuming. Peter Bentley, a computer science professor at the University of London, told the media after the launch of the Google-NASA lab that Google might have to spend billions of dollars and support scientists for several decades before seeing any concrete benefits tied to quantum computing research.

But Alibaba got involved because it saw this nascent technology as a great opportunity for the future, Wang said.

"The company is willing to act as a bridge, to serve as a voice for quantum computing technology," he said. "It's a rare opportunity to use technology to win a market."

Yet Alibaba's commitment is not exactly a plunge. Wang said the company should invest more than 30 million yuan a year. It will certainly have to decide in coming years whether to extend the investment, he said. And it will base that decision on the value of the lab's research results.

Most of the money that Alibaba plans to sink into the lab will be used to hire scientists, Lu said. Meanwhile, the government-backed CAS' share of the funding will go toward equipment purchases and the lab's general operations.

Terms of the cooperative agreement also give CAS the rights to all intellectual property connected to the research. But Alibaba has the right to buy those rights ahead of all other potential buyers.

Partnering with a company like Alibaba will help point the lab's researchers in a practical direction, said Zhou Zhengwei, a researcher at the Beijing-based CAS Laboratory of Quantum Information, which focuses on quantum optics theory studies. Commercial involvement should also have a positive impact on the lab's team in terms of access to resources and management, he said.

"It will help promote more practical research," he said. "Industry has a clear target and allows approaches that are difficult to practice under the academic system."

Indeed, Zhou is sure quantum computing research in China will get a big boost through this academic-industry partnership.

However, other researchers said that lab research into quantum computing and building a commercially viable quantum computer are two very different projects. For example, any commercial endeavor would weigh several non-scientific factors such as practicality and cost into the research.

In early 2011, a Canadian company called D-Wave Systems Inc. developed what it claimed was "the world's first commercially available quantum computer," calling it D-Wave One. A year later, the more advanced D-Wave Two was released. Google, the U.S. defense contractor Lockheed Martin and other companies bought models of the computer for US$ 10 million each.

Many scientists have argued that the D-Wave is not a real quantum computer, based on the speed of its computations. They say the model does not significantly accelerate computing over traditional supercomputers.

But technological advancements around the world are continuing. In April, IBM said it had invented a superconducting chip with the capacity for four qubits. The chip's development has been viewed as a breakthrough for quantum computer processors.

Moreover, a solid foundation for building chips and computers has been laid thanks to years of research focusing on quantum computation theory, said Zhao Shiping, a CAS physicist. The next step will be to apply that global wealth of theoretical knowledge through practical applications, Zhao said.

Wang said that theory and practice in the quantum computing field have almost nothing in common.