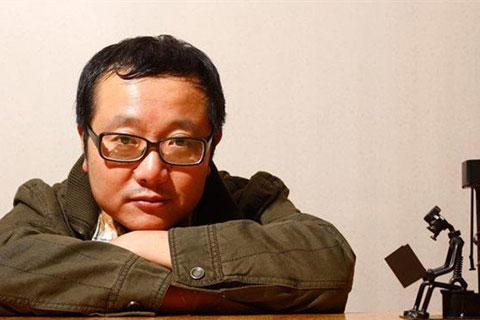 The Three-Body Problem unfolds at the start of the Cultural Revolution and is as much about the gravitational pull of planets as it is about personal ideologies. The author Liu Cixin has worked as a computer engineer at a state-owned power generation company in Shanxi Province for 30 years. His reign in Chinese science fiction started in 1999 with an article that won him the Galaxy Award, the highest award for sci-fi in China. He continued to receive the award for another seven straight years and again received the honor in 2010.

Now the winner of this year's 2015 Hugo Award, Liu's reputation as a master of­ the genre has been thrust into international prominence. The first in a trilogy, the Three-Body Problem depicts a mysterious alien civilization that wants to colonize the earth to save itself from being destroyed by the unpredictable suns in their galaxy, and the epic war humans wage to fight their invasion, which unfolds in full detail in the second book, The Dark Forest, of which the English-language translation was published in August.

With wit and candor, Liu offers a view into creating visions of the future and addresses how he feels about being a pioneer in the development of science fiction in China.

A translated excerpt of an interview he recently gave to Caixin follows.

Caixin: The Three-Body trilogy is both an ambitious and intelligent trilogy. Could you take us through the writing process of the books, and whether the narrative structure followed the initial idea?

Liu Cixin: Of course, as an amateurish author, I start writing a book only after I have the whole story outlined in mind. However, the story underwent many changes, and there were some unexpected divergences in its exposition. I can't say that it ended up being completely different. There were several changes, but it's hard to say by just how much. The story's central points evolved through a long process which involved many changes.

How long did it take to write the trilogy, from settling on the book's idea to the completion of the third novel?

Four to five years; I spent most of the time thinking about the plot, and only a short amount of time writing the book.

Did you discuss the book with others in the process of writing it?

Absolutely not. It has become a writing habit of mine: I refrain from discussing what I'm working on. Some writers like to share drafts with other people to receive comments – this is utterly unimaginable to me. I don't engage in these kinds of exchanges for my writing. This burden was 100 percent my own.

Some have said the third novel is a bit heavy on the science background while other readers say they don't feel the ending brought clear resolution. Have you considered extending or expanding the series?

For now, I am working on a new project. After this is completed, it's possible I might return to the Three-Body series.

The Three-Body Problem has reached the heights of critical acclaim. Do you feel greater pressure as a writer?

I should say yes. The trilogy will be hard to surpass not only because of the influence it has had but also because – and this is important – the success of any book owes to a lot to factors beyond the book itself. These factors are met by chance and not by pursuit. Not every book can be that lucky.

What are the defining characteristics of an outstanding sci-fi author?

It is hard to quantify the requirements one must meet to become a great writer. Great writers are most likely to born when their genre is popular. If the sci-fi market is prosperous, more writers will be attracted to write science fiction, and it becomes more likely that a master of the genre, a writer with real influence will emerge. This is not to say that it is entirely impossible for a genre that does not enjoy popularity to nurture a master; it is just that the possibility is small. In fact, any influential work is like the tip of a pyramid, with a lot of ordinary works below it serving as the foundation. Otherwise it is just an exception that can hardly be copied.

How would you describe the current state of Chinese science fiction?

The genre is still in active development and at this nascent stage, it's difficult to assess its strength on the basis of so few works. A great many authors have published sci-fi novels, but most of them write only one or two stories and then disappear. Only a few people remain active in the sci-fi world after a long time. The China Writers Association has about 10,000 members, but only 20 or 30 of them are regular sci-fi novel writers.

Do you feel there's a generation gap in how people communicate these days?

The gap exists, of course, because new media and Internet technologies have developed so fast. The era is different. People get access to more information and they live in an environment that is changing faster. But there are definitely more commonalities than differences between me and the youth. Most sci-fi readers are young people. The influence the Three-Body trilogy has had among young people means we share many things in common and can understand each other.

The story's rights for television adaptation were sold and I wonder if you have certain actors in mind for the characters in the novel?

It would be difficult to cast for some characters. I'm not familiar enough with the mainland's film and television industry, nor do I keep up with Hong Kong or Taiwan celebrities. I had several actors and actresses in mind who would suit some of the main characters when I started out on the first and second books, but after all these years, some of them have grown too old for the characters. I don't know of the young generation of actors too well. In general, it would be relatively easy to find actors in China to play common people and non-academic characters in sci-fi novels. But it would be hard to find someone who can play a scientist. Not many actors have that kind of temperament.

In what ways is Chinese sci-fi distinct to sci-fi written in the West?

That's a very big question and a few words on the subject would not suffice. One aspect is that Western sci-fi stories are often embedded with elements of Judeo-Christian thought and tend to focus on belief systems, concerning itself with moral issues such as cloning or artificial intelligence. Chinese sci-fi has emerged from its own cultural background and this accounts for many differences in how the genre has been uniquely interpreted.