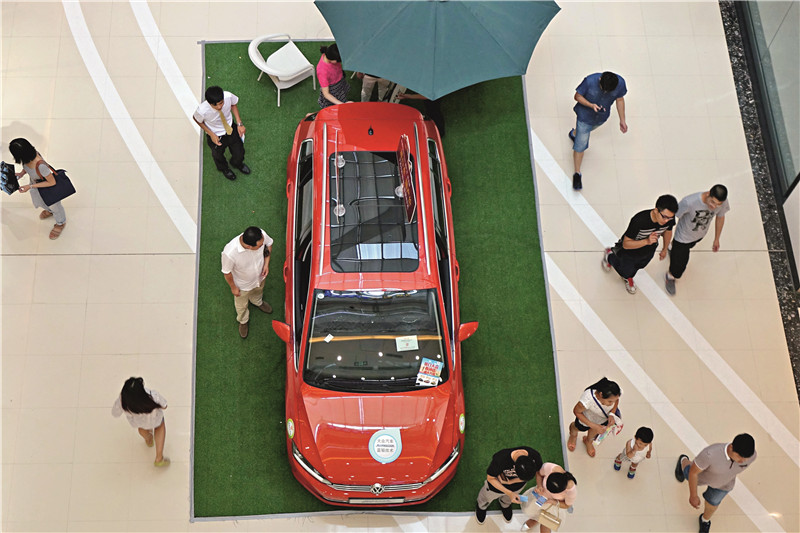 (Beijing) – Auto manufacturers and dealers who for years enjoyed a booming market in China have caught a chill after a long summer of unusually slow sales.

Even luxury brands, which are extremely popular in the country and often immune to sales slumps, have felt the pain. Makers of Audi, BMW and Mercedes-Benz luxury vehicles weathered a combined 1.7 percent sales decline in the first half of the year compared to the same period last year. Audi's China sales fell 12.5 percent in July year-on-year, while BMW sales were off 6.2 percent.

It was the first such decline ever in the country for these luxury German brands.

Companies have responded to weaker sales by cutting prices. In July, Tata Motors started discounting four Jaguar Land Rover models by as much as 50,000 yuan per vehicle. But that wasn't enough to prevent sales of Tata's luxury brands to fall 37 percent to just 5,409 units that month.

"Price cuts cannot stop the decline," said a Beijing auto agent who declined to be named.

Zhang Junyi, a Beijing -based global partner at the automobile division of Roland Berger Strategy Consultants, said dealers across the country have reduced their new-car orders. And an auto dealership chief who asked not to be named said his company has stopped placing new orders, blaming the decision on slow sales, bloated inventories and "the macroeconomic environment."

Chinese auto plants and their employees have also taken a hit. The Sino-German joint venture FAW-Volkswagen's plant in Chengdu – a manufacturing base for Volkswagen's Jetta and Sagitar models – was partially idled in late June after the company announced a 13-day holiday for some employees. The holiday was timed to mark the plant's anniversary, the company said.

Shortly after work resumed, the company announced another employee break, this time for 11 days, due to what it said were high temperatures. Normal plant operations resumed August 2. "We've never expected more than 20 days of vacation in July," said a plant worker.

The Chengdu plant ranks as one of the busiest for FAW-Volkswagen. A plant worker said "during the busiest period last year" employees toiled "12 hours a day for 20 consecutives days. There was no break for a plant anniversary or high temperatures."

Several sources close to FAW-Volkswagen said the company has already cut its 2015 production targets. The July target, was slashed to 77,350 units from 107,880 units, 43 percent below the July 2014 output. Targets for company production of high-end models, such as the Audi Q5, Audi Q7 and Volkswagen Magotan, fell more than half in July.

"Some Audi A-series production facilities are seeing high inventories," said a FAW-Volkswagen employee. "We have to adjust the production plan."

According to CAAM data, auto dealer inventories in China reached alarmingly high levels and have stayed there since February. Some companies took pressure off their dealers by cutting sales targets. BMW, reduced its second-quarter sales target 15 percent, while Jaguar Land Rover announced reductions of 10 to 20 percent.

BMW's decision to cut its sales target was designed "to match all overseas and domestic production circle and parts acquisitions," said a BMW dealer.

Because BMW's China sales rose 16 percent in 2014 from the previous year to 455,000 units, the company was bullish about its prospects for 2015, predicting sales to rise to 500,000. Now, many analysts say that target will likely be missed.

In the face of mounting industry pressure, automaker-dealer relationships have turned thorny. BMW dealers in China were already sensing a downturn last December. For that reason, the dealers teamed up and jointly demanded that the manufacturer raise dealer rebates as a way to offset the negative impacts tied to falling sales and prices.

Another BMW dealer said inventories of the luxury brand across China fell faster during the first half of this year than inventories for other auto companies. Audi's inventories are believed to be higher than average, the dealer said, as evidenced by the fact that "Audi didn't announce any production cuts before June, and it hasn't adjusted its arrangement with dealers yet."

Engel expects conditions will soon improve. "We have gone through the most difficult time," he said.

Nevertheless, the cooling market has pushed many dealers into a struggle for survival. Competition among dealers for new car buyers is rising. Some analysts say the fierce climate is likely to force an increasing number of dealers out of business.

One dealership that's already thrown in the towel is Huace Benz, a 20-year-old Mercedes-Benz dealer in the eastern city of Hangzhou. And the New York Stock Exchange-listed Beijing Lentuo Group dealership has closed about half of its outlets.

"The shutdowns are just getting started," said Zhu Kongyuan, secretary-general of the China Auto Dealers Chamber of Commerce. Nearly 30 percent of the country's auto dealers may be forced to close in the face of falling sales, Zhu said.

Regulatory changes have heightened the uncertainties. In September, the Ministry of Transport is expected to release a new policy requiring all automakers to publicly disclose information about components built into all vehicles. This information is currently only available to authorized dealerships.

The ministry's rule is designed to widen the market space for parts and maintenance service companies, thus improving competition. Until now, services and parts businesses have been controlled by official dealers and service centers, which some say overcharge customers.

In addition, the government plans to revise its rules for auto dealerships. When and how these rules may be changed has not been determined. Sources say the rule-making process has been bogged down by disagreements among different interest groups.

Meanwhile, automakers and their dealers in China are doing all they can to reverse the downward sales spiral.

"What we can do, both automakers and dealers, is try to maintain our business levels and wait for the market to recover," said one dealer.