How the Piano Became Chinese 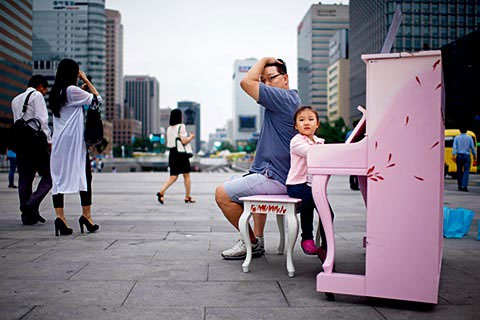 On January 24, 1601, the Italian Jesuit missionary Matteo Ricci arrived in Beijing bearing a cache of gifts that he had spent years assembling, and even longer trying to present to the elusive Wan Li Emperor. The gifts included such European curiosities as mechanical clocks, religious objects and a musical instrument: the clavichord.

"Musical instruments are quite common and of many varieties [in China]," Father Ricci wrote, "but the use of the organ and the clavichord is unknown, and the Chinese possess no instrument of the keyboard type."

Indeed, though China in the 1600s had numerous rich musical traditions that employed both domestic and imported instruments, it had nothing resembling the clavichord, a stringed keyboard instrument and predecessor of the piano. That's why Ricci chose it, hoping that the unusual instrument would so excite the emperor's curiosity that he would agree to receive Ricci – who could then explain the precepts of Catholicism and, in his wildest dreams, get the emperor to convert, and with him, all of China.

Ricci's elaborate plan was partly effective: Wan Li was intrigued by the strange instrument and sent four eunuchs from the College of Musicians to ask Ricci to teach them how to play. Ricci was not a musician, so when he reported to the palace, he brought along his colleague Diego Pantoia, who taught the eunuchs four songs for which Ricci wrote lyrics infused with Christian philosophy. The lessons lasted a month and then the eunuchs presumably gave a recital, although Ricci was not invited and never got to meet – let alone convert – the emperor. However, while Ricci's gift failed to turn China into a nation of Catholics, it did start the country on the path to becoming what it is today: a nation of pianists, piano makers, piano students and piano lovers.

The Jesuit missionaries who followed Ricci continued to present China's monarchs with keyboard instruments – the Kangxi Emperor even took the time to learn a few tunes on the harpsichord and required his fourth, fifteenth and sixteenth sons to play it, too. (The clavichord predates the harpsichord; its strings are struck by the instrument's action, while those on the harpsichord are plucked.) The first piano was built in 1709 by Bartolommeo Cristofori, curator of the Medici instrument collection. Cristofori called the instrument "a gravicembalo col piano e forte," meaning a "keyboard instrument that can be played soft and loud." Over the years, the name was shortened to "pianoforte" (soft-loud) and finally just to "piano." These new keyboard instruments eventually made their way to China and into the palace, which had at least three pianos by the turn of the 20th century. "Princess" Der Ling, the Western-educated daughter of a Qing diplomat, wrote of the Guangxu Emperor: "He was a born musician and could play any instrument without studying. He loved the piano, and was always after me to teach him. There were several beautiful grand pianos at the Audience Hall." Katharine Carl, an American artist who in 1903 spent several months living in the imperial palaces also commented on the pianos, which she said were in the Audience Hall of the Summer Palace. "In the back of the hall were three pianos, two upright and a new Grand piano, which had but lately arrived at the Palace. Her Majesty wished us to try the Grand piano…[she] thought the piano a curious sort of instrument, but lacking in volume and tone for so large an instrument."

Keyboard instruments spread outside the palace too, starting in churches, where the early missionaries installed organs, and then spreading rapidly after the Opium War (1839-42). Protestant missionaries began to enter China in large numbers at this time and they established schools in which pianos (or, in more remote areas, harmoniums) became standard teaching tools. By the 1850s, Shanghai already had a piano shop – Moutrie's – that sold, repaired and eventually assembled pianos. China's first piano factories were all founded by men who had worked at Moutrie's, many of whom hailed from Ningbo, which was renowned for the skill of its woodworkers. In October 1898, the New York Times reported that "Mr. Moutrie" was called to Beijing to repair the Emperor's piano. According to the article, Moutrie said "the keys were filthy and had various Chinese hieroglyphics stamped on them, while the instrument had not been tuned for years." He tuned it and cleaned off the writing – only to be told by the Emperor that the characters should be immediately replaced (perhaps because they were used as a guide for playing the instrument).

Piano education spread rapidly among China's elite in the early 20th century and was soon seen by many as a necessary part of a proper education, particularly for young women in cities like Shanghai. Many of the early piano teachers were Westerners, among them the Italian conductor and pianist Mario Paci who sailed into Shanghai in the winter of 1918 along with his Steinway grand piano. Paci's beloved piano was damaged by water in the hull of the P & O steamer and Paci himself took ill – he had to be carried off the ship and brought to Shanghai General Hospital to recuperate and the piano had to be carried to Moutrie's for repair. But Paci stayed in Shanghai until his death and taught many aspiring young pianists, among them Fu Cong (Fou Ts'song), who is an international concertizer, and Zhou Guangren, who is one of China's most important piano educators. When Xiao Youmei established what is now the Shanghai Conservatory in 1927, he invited a number of these foreign piano teachers to join the faculty. Among the most influential were Boris Zakharoff and Alexander Tcherepnin. Zakharoff, a graduate of the St. Petersburg Conservatory and a student of Leopold Godowsky, headed the Conservatory's piano department and taught such pianists as Ding Shande (who would later become president of the Shanghai Conservatory). Tcherepnin wrote the first piano primer based on the pentatonic scale and encouraged Chinese composers to create music that sounded Chinese – He Luting's "Buffalo Boy's Flute" was composed for a contest organized by Tcherepnin. By 1949, the piano was so widespread in China that Chairman Mao – whose wife, Jiang Qing, took piano lessons in her youth - used it as a metaphor in a speech that was later included in his "Little Red Book."

"Learn to 'play the piano,'" Mao told a group of cadres. "In playing the piano, all 10 fingers are in motion; it will not do to move some fingers only and not others. However, if all 10 fingers press down at once, there is no melody. To produce good music, the 10 fingers should move rhythmically and in co-ordination." Mao wanted his cadres to multitask, putting their fingers on problems with the same firmness and rapidity of a pianist at the keyboard. "Some play the piano well and some badly," he concluded, "and there is a great difference in the melodies they produce."

In the 1950s, China began to send young pianists who played the piano exceptionally well to overseas competitions – Zhou Guangren was the first to enter a foreign competition and Fu Cong was one of the first big winners, placing third (behind Vladimir Asheknazy) at the 1955 Chopin Competition. When radical leftists began to dominate Chinese politics around 1963, classical music fell out of favor but the piano was retained as a tool of revolution. This was in part thanks to the efforts of a young Soviet-trained pianist named Yin Chengzong who had placed second at the 1962 Tchaikovsky Competition. In 1967, Yin carted a piano to Tiananmen Square and played revolutionary tunes on it for several days. He then spearheaded the effort to adapt the model opera "The Red Lantern" for piano and create a concerto version of "The Yellow River Cantata," arguing "The piano was created by working people. Why can't it serve the working people, proletarian politics, and socialism?"

With the advent of the era of opening and reform, a "piano fever" broke out as people sought to buy and study the instrument, which was in short supply with only 10,000 manufactured in 1980. By 1990, China already produced 10 percent of the world's pianos – and then 30 percent in 2000, 50 percent in 2003, 70 percent in 2009, and almost 80 percent, or 376,000 pianos (mostly uprights), in 2013, a year in which it also imported 100,000 pianos. It also produced many of the world's top pianists, with Lang Lang known to virtually anyone with a passing knowledge of contemporary classical music performance. Estimates of piano students reach the tens of millions – by some accounts, the number of Chinese learning to play the piano is equal to the entire population of Canada, or greater!

Ricci's musical gift did not have the impact he hoped it would – but it certainly did have an impact.