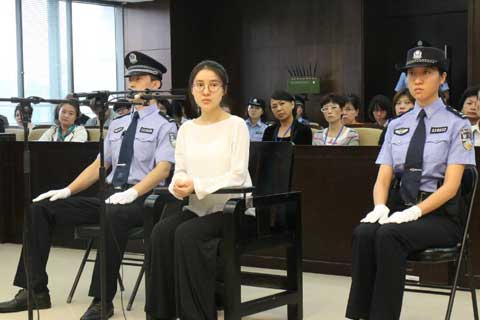 (Beijing) – A woman at the center of an episode that hurt the reputation of a big state-backed charity a few years ago has been sent to prison for running casino.

Guo Meimei was charged with running gambling operations where prosecutors said some 2.1 million yuan was wagered on poker and soccer games. The gambling occurred at two apartments Guo rented in March, June and July 2013.

Guo denied the charges at the one-day trial on September 10 at Beijing Dongcheng District People's Court. However, she told the court she participated in illegal gambling and invited people to her home to play high-stakes poker.

Guo was also fined 50,000 yuan. An associate named Zhao Xiaolai was given two years in jail and fined 20,000 yuan.

Guo was detained on July 9 last year when police raided her home. She told the court she watched her former boyfriend and others gamble, but did not get involved in any planning.

She appeared on state-run China Central Television in August 2014, and confessed that she engaged in prostitution, earning hundreds of thousands of yuan. She has not been charged with prostitution.

During the televised confession, Guo also apologized for flaunting a luxurious lifestyle online and harming the reputation of the Red Cross Society of China.

The 24-year old became national news in 2011 when she falsely claimed to head a business arm of the charity and posted photos of herself with an expensive sports car and luxury bags on social media.

The Red Cross Society later said that the business unit did not exist, but its reputation suffered anyway, with many in the public wondering if their donations made it to people in need.

The charity formed a committee to investigate the Gao Meimei episode, but critics questioned its effectiveness. It ran into more image trouble last year when it was found to be profiting from leasing warehouses intended for storing disaster relief supplies.

The uproar caused donations to the Red Cross Society of China to fall off dramatically.

Ding Jinkun, a lawyer at Shanghai Debund Law Offices, said the gambling operations charge is punishable by up to 10 years in jail, but the law is vague on what constitutes an offense.

Guo's former boyfriend, a foreigner and others will be tried later.