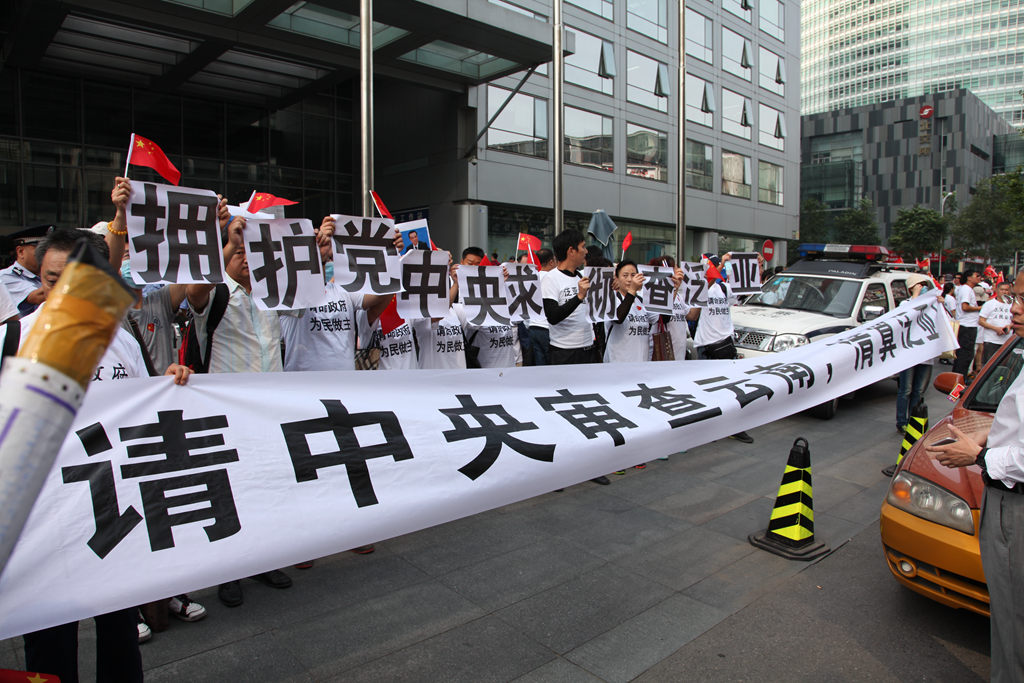 (Beijing) – A protest in front of the securities regulator's office in the capital by more than 100 investors who felt they had been the victims of a scam that one analyst says resembles a Ponzi scheme has put the spotlight on a government-backed nonferrous metals exchange in the southwestern province of Yunnan.

The crowd gathered in front of the offices of the China Securities Regulatory Commission (CSRC) on September 21 to demand regulators intervene in what investors said was a 43 billion yuan fraud involving the Fanya Metal Exchange, a four-and-half-year-old trading platform for nonferrous metals in Kunming, Yunnan's capital.

The protesters held banners saying that the exchange had cheated them. They want the CSRC to get involved and the police to investigate.

However, a person close to the regulator said the CSRC does not have jurisdiction over commodities exchanges. The best it can do is tell the CSRC branch in Yunnan to urge local authorities to sort out the matter, he added.

An investigation by Caixin has found that the local government was aware of Fanya's troubles as early as November and took measures to address the problem. However, its official attitude on whether the bourse was engaging in shady dealings is mixed.

A protester who declined to be named said investors were lured into buying products offered by the bourse that are linked to metals traded on its platform. A typical product promised an annual return of 13.68 percent with interest paid daily, he said.

Investors were required to deposit their money with Fanya and then use it to buy products. The mechanism was designed so that the exchange would pocket the excess in returns above the level investors agreed to, and make up for the loss if the price fell below a set limit, he said.

The demonstrators said some 220,000 investors were still locked into products sold by the exchange. They said they had been having trouble withdrawing money from their accounts with Fanya since April and withdrawals stopped altogether in July.

Fanya did not comment on the matter or the claim that the investments were in peril.

Fanya's business model amounts to letting investors lend to nonferrous metal traders with the commodity as collateral, an industry analyst with a futures trading company said.

Indium, a metal used in liquid crystal displays, is the main product traded in Fanya.

The biggest problem with Fanya – and what makes it different from other metals exchanges – is that "indium has always flown only one way from the market to Fanya and never the other way round," he said. Fanya's stock of indium had reached 3,400 tons, exceeding the amount needed globally for many years combined, the analyst said.

An investment product linked to a metal like this is essentially a Ponzi scheme, in the sense that the payments to old investors are sustained only by the money from new investors, he said.

Once the flow of money is cut off, or even so much as slows, he said, the trading companies that borrowed money are unlikely to be able to keep up with the interest payments that investors were promised. A default would leave the old investors with piles of metal that are worth much less than their prices in the exchange – and they cannot dump the metals for cash without triggering a collapse in price.

People close to the matter say the Yunnan government has known about Fanya's activities for a while, but it is unclear when officials in the provincial government's financial regulatory unit concluded that the exchange created a "huge risk."

Officials from the government met on November 13 to discuss how to speed up the clean-up and consolidation of all sorts of exchanges in the province, following an order of the State Council, the sources said.

The cabinet tapped the CSRC in 2011 with the task of leading a working group to clean up the country's many regional exchanges for securities and commodities. By November, only the governments of Yunnan and Tianjin had not completed the task, the people close to the matter said.

The Fanya exchange was discussed at the meeting, the sources said. They did not say what problems the government officials thought must be fixed.

However, soon afterward some Fanya employees learned they had been barred from leaving the country, the sources said. No official announcement was made, and they only found out at the airport.

Fanya lodged a formal complaint with the province's financial regulatory office on January 5. The complaint document, which Caixin has read, says the exchange believed that the ban on Fanya employees traveling abroad "not only will not help control and eliminate risks, but will trigger greater liquidity risks and create unnecessary panic."

The person close to the CSRC said the regulator has repeatedly sent orders to the CSRC branch in Yunnan to urge the local government to solve the problem, but little progress had been made.

As an added twist to the drama, a top local official reportedly spoke highly of Fanya and its chairman in public, even though the exchange has received a great deal of negative publicity.

According to PR Newswire, a U.S. news agency, Liu Guangxi, head of Yunnan's financial regulatory office, said at a reception on July 8 that "we will, as always, continue to support Fanya."

"The Fanya brand is worth a fortune," he said. "According to our government statistics, Fanya has directly contributed 360 million yuan in taxes to the country and another 670 million yuan indirectly."

Liu was also quoted as saying that Fanya's chairman Shan Jiuliang, who was at the reception, is an exceptional entrepreneur and a talent that is in short supply in Yunnan.

Fanya appears to be taking measures to assuage the angry investors. It has proposed negotiating with investors to solve the dispute and a meeting is scheduled for September 28.