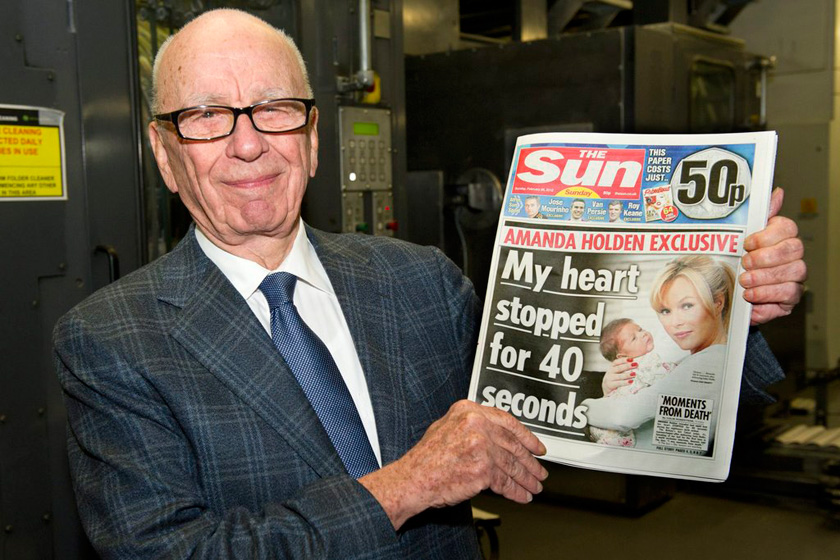 (Beijing) – In an exclusive interview with Caixin, Rupert Murdoch, the executive chairman of News Corp., said there is no serious problem in the Sino-American relationship and the United States should adjust itself to a rising China.

He visited China shortly before President Xi Jinping left for his first state visit to the U.S. on September 22. Xi met Murdoch at the Great Hall of the People on September 18 and offered written answers to questions from The Wall Street Journal, which is owned by Murdoch's News Corp.

"He is a very impressive man, very powerful and very thoughtful," Murdoch said of Xi in his interview with Caixin on September 20. "He's clearly thinking a lot about his coming visit to the United States and Europe."

Murdoch was born in Australia, prospered in Britain and lives in the United States. He admitted that he sees things "through American eyes" and hopes the two countries can understand each other better.

"There is a lot of adjustment and a lot of misunderstanding of each other's different civilization, different histories. So there is a great deal of work to be done, starting with our leaders."

The Sino-American relationship comes at a precarious time as China deepens its reform efforts and the U.S. prepares for a presidential election next year. In recent years, the two countries have had disputes on issues ranging from cybersecurity to the South China Sea. Some diplomats and academics from both countries wondered whether the bilateral relationship had reached a low point.

But Murdoch did not think so. "I don't think there is any serious issue between China and America. Neither one wants to have a war."

Cybersecurity will be high on the agenda during Xi's visit. The United States has blamed Chinese hackers for cyberattacks, a charge China denies. U.S. media reports say American officials are considering sanctions on Chinese individuals and companies.

"I think it's exaggerated." Murdoch said, referring to the cybersecurity issue. "We don't really know how much is done by governments. Clearly, the intelligence services of all countries, including America, are active in this area. When it comes to individual companies and individual people, hacking into intellectual property and stealing has got to be stopped. There has to be a clear understanding about that."

He said that as China develops, it has paid more attention to the protection of its own intellectual property, "so it's got to work both ways."

The status of the Bilateral Investment Treaty (BIT) will be watched closely during Xi's visit. The negotiations have lasted for seven years, or as long as it took for China took to negotiate its joining of the World Trade Organization in 2001.

In June, the two sides exchanged a list of prohibited and restricted areas for investment. More than 90 American CEOs sent a letter to Xi and U.S. President Barack Obama on September 14 to remind them of the importance of the treaty.

"I think we must push ahead with more trade," Murdoch said. He said there are signs that China is tightening foreign companies' access to its markets, which had been more open to foreign investors in the past. To create a friendlier atmosphere for investing, he said the rule of law should oversee the market.

"We need clear laws here so people can invest with confidence," Murdoch said.

Exports of high-tech products are one of the thorny issues in the BIT talks. Murdoch said high-tech should come to China and vice versa, but security concerns must be considered.

"Could things be implanted in high tech that can be used later?" he said. "It is certainly possible. Until we get rid of suspicions and get more trust between the two countries that will be a problem."

The timing of Xi's visit comes ahead of a U.S. election in November next year, and the Sino-U.S. relationship has sparked fierce debates among presidential candidates.

Murdoch said the bilateral relationship should not be held hostage to the election. "All the people vying to be nominees want to look very tough," but when they get elected, "reality sets in," he said.

Caixin will publish the full transcript of its interview with Murdoch soon.