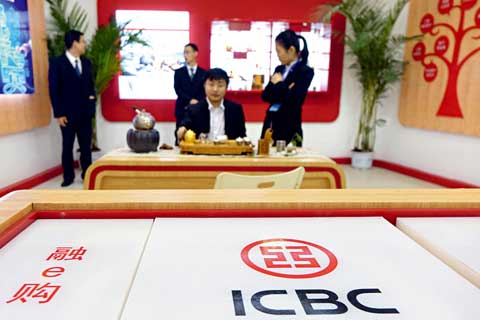 Bankers are responding to the challenges posed by Alibaba, Tencent and other online-only companies that have expanded beyond e-shopping and social media services into a variety of financial services, including web-only banks.

Other big banks are likewise expanding into the booming, Internet-based financing market. They're also growing their e-commerce businesses, some of which have been around for several years. And eventually, it's expected they'll shrink their branch networks and workforces as more business shifts online.

The question is whether China's big state-owned banks can not only expand into Internet financing but also make money.

A former bank executive now working for an Internet company is among those with doubts. The online services on banker agendas are not unlike what's already on the Internet, the ex-banker said.

"The key question" now facing banks, he said, is "how to use the Internet… and provide distinct products to customers."

China's powerful, wealthy big banks are naturally confident that they can succeed on the Internet. For example, Jiang said he expects 100 million customers will soon be using ICBC's online business platforms. And within a couple of years, he predicted, ICBC will be a leading online market player.

Casting a shadow over Jiang's enthusiasm, though, are bank industry experts who say online financing is more about quality not quantity.

One expert who asked not to be named said banks that want to succeed online must first build dynamic businesses. That's what Tencent and Baidu, for example, did before getting into financing. And online success, the expert said, should never be measured merely according to user numbers.

Zeng Gang, a banking expert at the Institute of Finance and Banking, a unit of the Chinese Academy of Social Sciences, said Internet companies got into the financial services sector slowly, step-by-step. A first step for many was to start an online payment system. After that, they expanded into lending and wealth management services.

The banks, though, are not following in their footsteps. Zeng said banks have taken different approaches to online financial services. Moreover, banks and Internet companies do not share the same motivations.

One motivating force behind banks is old-fashioned competition. The basic, retail banking business that has been so lucrative for China's state banks has been eroded in recent years by online financial services. Some of these are run by online, third-party payment providers.

Banks are also confronting internal challenges. "To do business on the Internet, banks need institutional arrangements and personnel management systems that are like Internet firms," said one Internet company official who asked not to be named.

Some banking industry experts have suggested banks provide Internet financial services through independent subsidiaries. These subsidiaries could operate under institutional arrangements that fit the online business atmosphere, in areas such as employee "incentives and assessments," said a bank executive.

"In the past," the executive said, "a bank subsidiary's chief executive was changed after just one year with no profits. But the Internet profit model is totally different."

ICBC advisers have suggested the bank spin off its online business platforms, an anonymous source told Caixin. For now, though, the bank is apparently taking a wait-and-see approach.

What ICBC executives want is an integration of existing Internet and mobile banking services. Jiang said the plan calls for generating a steady flow of business by combining the bank's messaging, shopping and financial services.

The e-ICBC initiative – with its three platforms and one financing center – is designed to engage ICBC customers by offering business-to-business and business-to-consumer services. And ICBC expects more than 100 million people to use its new messaging app.

The messaging app has been designed as a marketing platform, said Hou Benqi, general manager of ICBC's electronic banking department. It will also provide financial information and offer a communication channel between bank managers and customers.

Building an all-new social media platform isn't easy, said a staffer who works for CCB's Internet finance department. That's why CCB chose not to build its own platform but instead partner with Tencent's messaging app WeChat. As a result, CCB now has an "account" on WeChat that gives users access to its customer service office.

The staffer said that, as of August, the amount of service requests handled through WeChat had surpassed those processed by the bank's traditional customer service center.

Some analysts have expressed doubts about ICBC's strategy. One analyst warned that online user traffic could become too widely dispersed under ICBC's three-platform system.

"It's easy to develop three apps," the analyst said. "But following through with updated services and products is challenging. Even big Internet companies such as Baidu, Alibaba and Tencent have been hesitant to do multiple platforms."

In June 2012, CCB became the first Chinese bank to launch an e-commerce business at www.buy.ccb.com. The site reported 30 billion yuan worth of transactions, 57,000 vendors and about 12 million shoppers in the first half of 2015, according to a CCB financial report.

ICBC launched its e-commerce website in January 2014. By June of that year, according to a bank financial report, the service had posted 200 billion yuan in sales – an amount that ranked ICBC's website sales third in terms of revenue, behind Alibaba's tmall.com and JD.com, among Chinese e-commerce platforms.

BOC launched its e-commerce site in October 2013, and today boasts about 15,000 vendors and 1.2 million users. BOC's long-range plan calls for using the website to build a platform that connects service providers and clients.

ABC launched www.e.abchina.com in April as a service providing e-commerce deals to people in rural China. The website counted 20,000 vendors and 700 million yuan in sales through June.

Not every bank playing the e-commerce game has been a winner. Many small banks around the country have been forced to close online shopping websites that they opened over the past three years.

But the hurt has been bearable. One banking industry analyst noted banks have spent a lot less time and money building e-commerce businesses than Internet-only companies such as JD.com.

E-commerce is also a seen as a sideline for banks. A CCB source said his bank has no interest in competing against JD.com and Alibaba.

Moreover, e-commerce is just one of several online options for China's transforming banks, and that these businesses can be intertwined.

Hou said a bank's e-commerce business generates consumer as well as vendor demand for its financial products. "This is where a huge amount of credit demand comes from," he said.

Banks also preparing to shift more business to the Internet and away from bricks-and-mortar branch offices.

A bank executive who asked not to be named said up to 95 percent of all services offered at branches can now be handled online.

Until now a bank's "biggest advantage was its branch network," said Zeng. "Now, it's become the biggest burden."

At some point, branches and employees will be phased out. But Zeng said "they can't be simply cut. There needs to be deliberation on how to develop the branches with new characteristics."

Jiang said most ICBC branches will change their function and business targets according to the demands of neighboring communities. Workforces will be reduced and surviving staffers will have to change their job functions, he said.