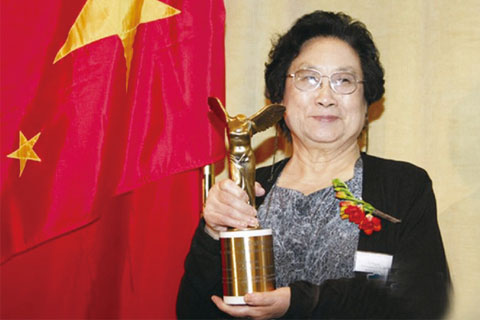 (Beijing) – A medical researcher has become the first Chinese national to win a Nobel Prize in scientific research, and one expert says her victory highlights flaws in how China chooses members of its prestigious academies.

The Nobel Committee of the Karolinska Institute in Stockholm announced on October 5 that Tu Youyou was among three winners chosen to share this year's prize in medicine or physiology for her contribution to the discovery of qinghaosu or artemisinin, an antimalarial drug.

Despite international recognitions for her work – Tu won the Lasker Award in 2011, one of the biggest prizes in medicine – the 85-year-old researcher from the Academy of Traditional Chinese Medicine in Beijing has received little recognition for her achievements in her home country.

She does not have a doctoral degree and is not a member of the prestigious Chinese Academy of Sciences.

"From what Tu has experienced in China, we can see how the selection of academicians has been flawed because it is carried away with non-academic issues," Jin Dongyan, a biology professor at Hong Kong University, wrote on a blog.

Before 2014, intellectuals, military officials and senior executives at state-own enterprises could be nominated to a top academy and the process was sometimes marred by corruption. Zhang Shuguang, a disgraced former railroad engineer, once spent more than 20 million yuan trying to become a member of Chinese Academy of Sciences.

Analysts also blame a controversy about Tu's role in the discovery of artemisinin to the fact she is not a member of a top academy. Some scientists have criticized Tu for allegedly failing to credit her team for the finding of artemisinin for Project 523, a project established in 1967 to fight malaria in North Vietnam and cities in southern China. The project involved 500 researchers from 60 institutes around the country, including Tu, who was a research assistant back then.

In a book published in 2006, the then deputy director for the project, Zhang Jainfang, said the artemisinin success was a "collective honor" for everyone involved and that limitations on talent, equipment, funding, knowledge and skills meant no individual could accomplish such a medical breakthrough.

However, Lu Bai, a professor at the Tsinghua University School of Medicine, said Tu played a pivotal role in the research. "Although a lot of people participated in the project, she made the most important decisions and that's also what the Nobel Committee cared about."

The Nobel Committee acknowledged that Tu played a decisive role in the research by using ether to extract active ingredients from plants.

"After all, discoveries are made by individuals and not by organizations" Goran Hansson, secretary of the Nobel Committee for Physiology or Medicine, said on the committee's website. "In a time when organizations and institutions become increasingly important and powerful, it is even more important to identify the creative individuals who change the world."

Tu started to gain fame in 2007 when two researchers at the U.S. National Institutes of Health, Louis Miller and Xinzhuan Su, looked into the history of artemisinin and named Tu as the person who found the drug.