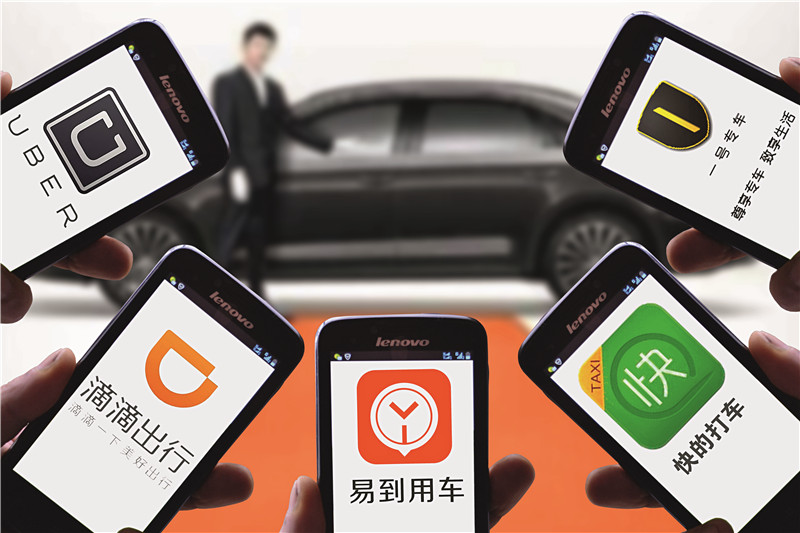 Insurance companies, Internet giants and the Chinese government's sovereign wealth fund are among the deep-pocket investors tapped in recent months to finance the app-based taxi alternatives available in dozens of Chinese cities.

Uber, an American company whose Chinese investor-partner is the search engine Baidu Inc., said in August that it had raised at least US$ 1.2 billion from undisclosed investors to finance its growing China business. Although CIC and China Life Insurance Co. had been rumored as potential Uber backers, sources told Caixin neither was involved in the latest fundraiser.

Media reports in June said Uber hoped to raise US$ 2.5 billion globally, including US$ 1 billion from Chinese investors. Uber has also told investors its Chinese division is preparing to file for an initial public offering on a mainland stock exchange.

Analysts said Uber has a global market value of about US$ 50 billion. Its China division alone is said to be worth around US$ 8.2 billion.

The latest investments follow smaller fundraisers spanning the early business years for these popular apps designed to help consumers find and hire drivers who give them lifts in private cars.

According to financial records, a Didi-Kuaidi predecessor Didi raised US$ 870 million between 2012, when it was started by former manager at Alibaba-affiliated payment service Alipay, Cheng Wei, and 2014. That amount included a first batch of US$ 1.6 million initially invested by Tencent in 2012. Kuaidi, which was launched in 2012 in the eastern city of Hangzhou, raised US$ 985 million from 2013 to last year.

The companies merged to form Didi-Kuaidi in March.

Uber entered the Chinese market in July 2014. In December that year, it had raised US$ 1.5 billion for its China operations from various investors, including US$ 600 million from Baidu.

In an interview with Caixin, Didi-Kuaidi President Liu Qing said government-linked investors have been particularly helpful in raising his company's market value. Sources said that CIC's recent investment in Didi-Kuaidi was worth about US$ 300 million, and that Ping An had contributed about US$ 200 million by investing through a venture capital fund.

Despite these successful fundraisers, though, Didi-Kuaidi and Uber have hit a more than a few dead ends. A source at a large investment institution said officials from Didi-Kuaidi, Uber and another Chinese car-hire rival called China Auto Rental (CAR) approached his firm and other institutional investors in recent months to ask for money. The source said his firm turned down these requests on the grounds that car-hire businesses have yet to prove they can turn a profit.

Several sources working for institutional investors expressed special reservations about investing in Uber, saying they are concerned that the company may hit a regulatory wall.

Uber and Didi-Kuaidi have worked hard to please regulators. On October 8, Didi-Kuaidi received a formal car-hailing business license from the Shanghai transportation authority – the first license of its kind in China. That same day, Uber opened a China division office in the Shanghai Free Trade Zone with registered capital of 2.1 billion yuan and promised to invest 6.3 billion yuan in China.

Liu said Didi-Kuaidi has been keen to communicate with transportation authorities in cities where it does business. The company also tries to cooperate with taxi companies. These efforts have paid off in Beijing, where officials recently approved a 500-car partnership between the government-backed taxi company Shouqi Group and Didi-Kuaidi.

Nevertheless, some market watchers think the government in the future might limit Uber's market access. These limits may be based on fears that sensitive information about China's transportation sector could fall into the hands of foreigners.

On the other hand, a source close to Uber said, many observers think the government will leave the U.S. company alone because its services can help resolve some of the country's urban transportation problems.

Nevertheless, some investors have questioned the wisdom of backing Uber instead of Didi-Kuaidi in China, since the latter's supporters include the influential Chinese billionaire Jack Ma of Alibaba and Ma Huateng of Tencent.

"Do investors want to go up against Jack Ma and Ma Huateng?" asked an investor who requested anonymity.

Making it even more difficult for many investors is the fact that neither Uber nor Didi-Kuaidi makes money in China. Taxis are plentiful and fares are generally low in most parts of the country, which can make it difficult for car-hire schemes to compete.

According to several sources close to Didi-Kuaidi, the company is also operating at a loss.

Liu said investors value his company for its rapid growth, dominant market share and a business model that is more diverse than Uber's, as Didi-Kuaidi taxi and bus-hire units supplement its car-hire operations.

According to market analysts, Didi-Kuaidi controls about 70 percent of the car-hire market in China in terms of rides, while Uber accounts for 20 percent and CAR 10 percent.

But in order to build its customer base, Didi-Kuaidi has been subsidizing rides by paying drivers. These subsidies are in addition to the fees drivers collect from passengers.

An audit of Didi-Kuaidi's books found that between January and May, the company handled 39.5 million ride orders valued at an average 34.4 yuan before expenses. After subtracting subsidies and other costs, the audit said, Didi-Kuaidi lost an average 19 yuan per ride.

Liu said these subsidies would end when rider and driver numbers "stabilize." She did not say when that might happen.

The profit question has long dogged tech start-ups, including car-hire app firms. Even so, plenty of investors around the world have enthusiastically backed companies such as Facebook, Twitter, Didi-Kuaidi and Uber on hopes that any future public listings would yield healthy returns.

And the app firms have gone to great lengths to show they mean business.

The decision to merge Didi and Kuaidi, Liu said, was aimed at helping the company advance "to a higher level." The merger closed after just one day of talks because it was immediately supported by Tencent's Ma and Alibaba's Ma.

At a conference in September, Cheng said the tie-up prompted an offer from Uber officials to buy a 40 percent stake in Didi-Kuaidi. But the Chinese spurned the offer.

Uber responded to the rejection by ratcheting up its rivalry with Didi-Kuaidi: The U.S. company allocated US$ 1 billion to subsidize its China customer ride costs in the hopes of beating the competition, according to a source at an investment institution who is familiar with all three car-hire companies.

In addition to pushing its own ride-subsidy scheme, Didi-Kuaidi announced on September 15 that it had invested US$ 100 million in ride-hailing start-up Lyft, a Uber competitor in the United States. The companies agreed to cooperate so users traveling to the other country can arrange rides during visits.

And Uber has found the China market far more challenging than its home turf. An investor close to the firm said it succeeded in the United States partly due to an abundance of private car drivers and a shortage of taxis – a shortage that contributes to high taxi fares and yields profits for car-hire schemes.