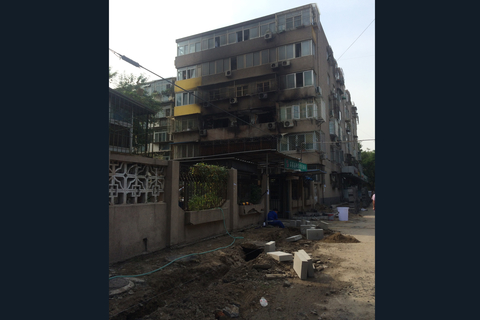 (Beijing) – More than a dozen people who were recently hurt in a fire in a residential building that was intentionally started by an upset boyfriend have found they cannot use their national health insurance because the incident involves criminal activity.

The blaze was started on September 22 in a six-story apartment building in northeastern Beijing by a man who had a fight with his girlfriend over the phone, police said.

Thirty-five firefighters needed one hour to put the fire out because it spread from the man's second-floor apartment and filled the upper floors with thick smoke.

Li Yiming, whose parents, sister and a niece lived on the sixth floor, said her relatives suffered burns while trying to flee from smoke inhalation.

Li, who is in her late 20s, said her father wound up dying and the medical bills for the four rose over 1 million yuan. She said the family was told by doctors that since the fire was the result of criminal activity, the medical treatment could not be covered by the China's national health insurance, and the family would have to seek compensation from the man who started the blaze.

Police said the man is a debt-ridden small business owner and that he has been detained.

Patients in China's hospitals can usually get between 60 percent and 100 percent of the costs of their medical treatment reimbursed by the national health insurance program – but few people seem to know that this is not possible if criminal activity is involved.

Professor Wang Zhen, an expert on medical reform at the Chinese Academy of Social Sciences, a top government think tank, said injuries that are suffered as a result of criminal activities are not covered by the government-backed health insurance.

He said victims must pursue the criminals for compensation and they can also ask the Ministry of Civil Affairs for financial help for medical expenses.

Li said she has contacted local officials about getting compensation from civil affairs authorities, but they did not say whether any money was on the way. Li said she has also started a campaign on social media to try to raise funds for her relatives' medical treatment.

Caixin reporter Gong Jing, who lives in an apartment on the sixth floor of the building where the fire was started, suffered injuries from smoke inhalation while taking his wife and seven-year old son to safety, and doctors had to cut open his windpipe to help him breathe.

Gong, who has left the hospital, said that he has been unable to use his national health insurance card and that his medical bills have reached nearly 50,000 yuan by October 15.

In many other countries, the government is bound to compensate or provide financial help to people who are injured by crimes or accidents, but in China this is done on a case-by-case basis by asking civil affairs officials for help.

The government is sometimes quick to pay victims of accidents involving criminal behavior, especially when incidents involve large groups of people or gain a lot of attention, mostly because officials fear unrest if victims are not placated.

Families of more than 400 tourists who were killed when a cruise ship sank in the Yangtze River on June 1 got 960,000 yuan each from the government even before the insurance company of the boat's owner made their payouts.