By staff reporters Qu Yunxun, Qin Min and He Xin 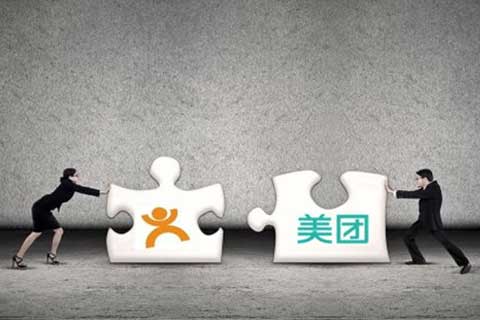 (Beijing) – In face of mounting difficulty achieving growth amid an economic slowdown, many Internet firms are deciding to merge with former rivals in a bid to sustain their business and ward off competition.

Industry analysts said these deals are a response to hesitation by investors to pour money into once-attractive start-ups – particularly the kind that are linking online platforms to real-world businesses, known as online-to-offline (O2O) providers – partly due to slower business and recent stock market turmoil.

The negotiations between Meituan and Dianping went swiftly and were propelled by the investment firms China Renaissance Partners and Sequoia Capital, an investor with knowledge of the matter said.

Analysts and investors have anticipated a tie-up between the rivals since the beginning of the year, reasoning that it will reduce competition and help them win investor support, backing that is needed to support expansion.

In July, Meituan, which arranges group purchases for things such as meals in restaurants and movie tickets, announced a new round of fundraising. In a September 15 interview with Caixin, Meituan vice president Wang Huiwen said the company had reached preliminary agreements with more than 20 backers for more than US$ 2 billion. Those investors valued Meituan at over US$ 10 billion, but the firm has not said the fundraising has been completed.

In late September, Dianping, which got its start in restaurant reviews but has expanded into restaurant group offers and wedding services, kicked off a sixth round of fundraising. The company is preparing for a public listing in China, a source close to the matter said.

Dianping raised US$ 850 million in March and was valued by investors at US$ 4 billion.

The new fundraising is preparation for a slowdown in investment, Wang said. The stock market slump has triggered venture capital and private equity investors to adjust their portfolios since they have concluded that the financial sector's Internet-related frenzy had, after several years, come to an end.

After the merger, the new Meituan-Dianping company controls around four-fifths of the group-buying and wedding services market, the Internet data provider EnfoDesk said. But Meituan-Dianping will still face competition from other group-buying websites, including the Baidu Inc.-backed Nuomi.com, Alibaba Group Holding Ltd.-invested restaurant-review site Koubei.com and the eatery-booking site Ele.me.

Alibaba has spent billions of yuan to develop Koubei, and in June, Baidu CEO Robin Li promised to invest 20 billion yuan into Nuomi over the next three years. Shortly after the announcement of the Meituan-Dianping tie-up, Nuomi promised 1 billion yuan to subsidize its users.

Meituan has held two rounds of fundraising this year. In January, its CEO, Wang Xing, said the company had raised US$ 700 million from a number of backers led by Hillhouse Capital Group. Investors valued the company at US$ 7 billion.

Meituan's vice president, Wang Huiwen, said the stock market slump that started in July has reminded the company that "the capital market is entering a period of winter." "We have felt that fundraising is getting more and more difficult, so we decided to launch a new round now."

Wang said that latest round kicked off on July 27, and the U.S. investment bank Goldman Sachs was hired as financial advisor.

Meituan's fundraising would face more challenges than previous rounds because investors have poured huge amounts of money into the sector and their enthusiasm is waning, several sources at investment institutions said.

However, Meituan's boosters said mature companies are the preferred targets for investors amid a market downturn. The only question for the company is the price, said one investor.

Meituan's fundraising efforts started with some mudslinging. In August, several articles circulated on the Internet implying that its efforts to attract investors were a failure. An investor in a rival company who asked not to be named said progress was slow and "big institutions have shown little interest," prompting Meituan to lower its target market value.

Many in the market speculated that Meituan would be valued at US$ 15 billion this time around, the source said.

But Wang fought back in an interview with Caixin in early September, saying the firm had made good progress raising funds under the current market conditions. He called the US$ 15 billion valuation "a rumor started by rivals in order to create the impression that Meituan's actual valuation is declining and to scare sway potential investors."

Wang said Meituan has reached preliminary agreement with state-backed investors, including China Development Bank Capital, the investment arm of a policy bank. An official at CDB Capital said it has not made a final decision on the matter yet.

Even though investors have poured money into O2O sector, most companies have not yet worked out a sustainable profit model. Companies like Meituan and the Didi-Kuaidi firm, have invested heavily to subsidize customers in order to win market share. The investor in Meituan's rival said Meituan has spent 700 million yuan a month on subsidies, including 300 billion yuan on the food delivery service, 200 million yuan on group buying and 150 million yuan on film ticket sales.

Meituan has not revealed the amount of money it has spent on subsidies, but Wang said the food delivery business has gotten the most help.

Meituan is mainly competing with Ele.me in the food delivery market, followed by the Baidu-invested food delivery service Waimai. All of those firms have spent heavily to offer big discounts to users.

One investor said he is concerned about how long this can last.

"When restaurant delivery services targeting students on campuses emerged, we studied the business and found that students are very sensitive to price," the investor said. "Companies have invested so much money, but found that as soon as the subsidy ends, students go back to the campus canteen."

Ele.me, which started as a campus delivery site, switched its target customer from the student to the office employee in January because it believed that the latter are more tolerant to higher prices, company founder Zhang Xuyao said.

Restaurants have started to partner with Internet food delivery and group-buying sites such as Ele.me and Meituan in hopes to attract more customers to their sites, but Bai Min, CEO of yazuo.com, a restaurant membership service provider, said restaurants' reliance on O2O platforms for customers will weaken their brand and the increased business is unsustainable.

Some eateries are instead seeking to cooperate with Internet companies and paying more attention to developing a customer base, said Luo Xiaojun, the general manager of a chain restaurant.