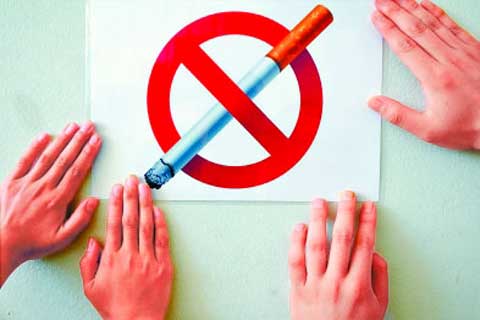 (Beijing) – Anti-smoking activists say lawmakers who are set to deliberate on a draft charity law should consider banning tobacco firms from making donations so they do not use charity efforts to promote cigarette use.

Members of the Standing Committee of the National People's Congress, the body that runs the legislature between its full meetings, will meet in the capital from October 30 to November 4 for a first reading of a proposed Charity Law.

The law has been a decade in the making. One sticking point is whether cigarette firms should be allowed to donate to charities, people close to the legislature say.

Wu Yiqun, a vice director of the Think Tank Research Center for Health Development, a non-governmental group, said that lawmakers should ban such donations just as they banned tobacco commercials in the Advertising Law passed in April.

She told a forum on smoking control and charitable donations in Beijing on October 28 that if a ban is not included in the law, tobacco companies could benefit from media coverage of charities they sponsor.

In 2011, Hongyunhonghe Group, a major cigarette manufacturer in the southwestern province of Yunnan, was hailed in state media as "an outstanding enterprise that cares a lot about social welfare" because it funded an award for primary school teachers and a student grant in Kunming.

"This kind of sponsorship does not cost the company much, but can change the perception of cigarettes among young people by linking a cigarette brand to philanthropy," Wu said.

Yang Jie, a researcher in the smoking control office of the Chinese Center for Disease Control and Prevention, said at least 29 countries, including Russia, India and Brazil, have laws against donations and sponsorships by tobacco firms.

The proposed Charity Law allows any individual, private company or other institution to make donations to charities and does not mention tobacco companies. It also allows donors to enjoy tax breaks and have their brands associated with charities.

Xu Guihua, a deputy executive director at the government-backed Chinese Association on Tobacco Control (CATC), told the forum that these two benefits would encourage tobacco firms to make donations.

China has 300 million smokers and the government has recently made some efforts to change this. Regulations that went into effect in the capital on June 1 ban tobacco manufacturers from any kind of advertising or sponsorship. The rules also bar smoking in Beijing's public indoor areas.

The World Health Organization recently urged China to extend that ban across the country, warning that deaths related to the habit could triple to 3 million per year by 2050. Research by the WHO and the Chinese Center for Disease Control and Prevention found that 740 million people, including 184 million children, are exposed to second-hand smoke in the country, leading to 100,000 related deaths each year in China.