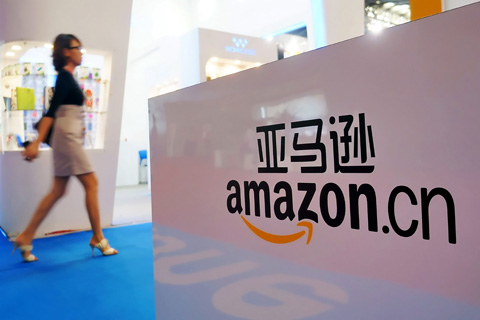 (Beijing) – The changes have been palpable at Amazon China since Doug Gurr took the reins at the Chinese unit of the Ameican e-commerce giant unit last year.

In March, Amazon China opened an online "shop" on the Tmall e-commerce website owned by Alibaba Group Holding Ltd. Consumers can use the shop to buy imported, name-brand clothing, shoes and other goods.

Four months later, the usually publicity-shy company invited journalists from some 20 Chinese media outlets to an annual meeting between Amazon China executives and its suppliers. In years past, these meetings were held behind closed doors.

But the biggest business move since Gurr took over came in August with the launch of what the company calls its Global Store on the Amazon China website. The Global Store lets Chinese consumers buy goods from around the world.

Amazon China was one of the first, foreign e-commerce firms allowed to do business in the country. It's long faced stiff competition from domestic giants Alibaba and JD.com Inc., which have dominated the market through ubiquitous promotions and by offering the kinds of cut-rate discounts that Chinese shoppers love.

Today, Alibaba's Tmall controls 58 percent of the market for retail e-commerce sales in China, according to iResearch Consulting Group. JD.com holds second place with a 20 percent market share, while Amazon is a distant eighth with 1.1 percent.

But Amazon's globally recognized brand name, international sourcing network and technological know-how have helped it build a strong niche in the country. And the Global Store is that niche's latest manifestation.

Now, Gurr said, the Global Store is giving the company a new way to grow in the country by linking rich, brand-conscious shoppers to sellers around the world. It's a business model that sets Amazon China apart from its more powerful rivals – in a profitable way.

"If you're not the biggest player in the market, you need to stand out from the rest by having something only you can deliver," Gurr said during a recent interview with Caixin.

So far, it looks like the strategy is working. Consumer orders of overseas goods through Amazon China more than tripled in the second quarter 2015 compared to the first quarter, to 5 million, the company said.

Amazon China has been eyeing the market for foreign goods in the country since 2012. Its own research determined that consumers shopping online for overseas products prefer Amazon's U.S. division over other websites. Researchers also found that China-based e-commerce companies used the American Amazon site to source half of all foreign-made goods offered in 2013 and 2014.

Xu Bin, who oversees fashion product sourcing at Amazon China, said shoes and designer clothing account for more than half of all imported goods sold through the website. For that reason, the company employs fashion-savvy women to work on a team of international buyers that scout for products expected to sell well back home.

Amazon's status as international brand with a strong reputation and global sourcing has helped it attract more foreign-brand shoppers in China than Alibaba and JD.com., said Li Chengdong, an independent e-commerce analyst in Beijing.

When Seattle-based Amazon made its first foray into the Chinese market more than 10 years ago, Alibaba was only a year old and JD.com was just getting started. Chinese consumers slowly got to know Amazon, although its rivals expanded at a feverish rate partly by mirroring the American company's business model. While preparing for a May 2014 initial public offering on the Nasdaq exchange, JD.com promoted itself as "an Amazon from China."

But reputation isn't everything. In fact, Li said, Amazon's strategy so far hasn't done much to counteract competitors that make a lot of money by bombarding consumers with special promotions and discount pricing.

Moreover, Amazon China did not grow as quickly as its rivals due to the regulatory hurdles that face all imported products. For example, China's laws can require that a cosmetics product made in Japan undergo three years of safety testing before it can be sold in the country.

In 2014, Gurr said he convinced Amazon founder and CEO Jeff Bezos to approve opening a shop on Tmall, China's most popular e-commerce site. Cooperating with rival Alibaba through Tmall was "a decision as simple as that we need to adhere to our most fundamental strategy and goal," which is to reach everyday Chinese consumers, Gurr said.

But hooking up with Tmall was an experiment and not an end in itself, Gurr said. The next step was much bigger: Launching the Global Store.

Amazon China's Global Store, which the company also calls "the everything store," is actually a Chinese-language virtual showroom displaying goods posted on its U.S. website, from baby formula to wines. Shoppers in China can browse catalogues of these goods and place orders, all in their own language. Goods are shipped from overseas and delivered to a customer's door.

A shopper can use a Visa or Mastercard credit card issued by their bank to pay online because most major Chinese banks have cut deals with foreign card companies for international payment clearance. Shoppers have the option of being charged in yuan according to that day's exchange rate or in U.S. dollars.

Amazon said it upgraded its payment system so that shoppers can not only pay with domestic bank cards but also access the same after-sales services, including refunds, available to customers in other countries.

To complement the Global Store, Amazon launched what it calls its Global Hunter program in the first quarter. The program sees Amazon hire people in various countries to find suppliers and source goods that would sell well in China. Global Hunter was thus designed to help the company better serve the Chinese market.

Because Global Hunter employees speak the local language and have a common cultural background, they can get to know and work closely with local suppliers, according to Niu Yinghua, an Amazon China executive in charge of international brand strategy.

Global Store's ultimate goal is to control the Chinese market for cross-border purchases. And it's come on strong: Since the American pre-Christmas sales event called Black Friday in 2014, Amazon China has expanded its online catalogue of U.S. goods to 3 million from 70,000. The website also lets shoppers buy goods through Amazon Japan and Amazon Europe.

The Global Store thus crystallizes the company's effort to consolidate its position in China and spur growth, Gurr said.

"What I've accomplished personally is that I found a place in China that lets us grow rapidly and stay on the right track," he said.

Despite Amazon China's efforts, reputation and other advantages, the fact remains that Chinese powerhouses still control the online shopping business – and may hold their top positions for some time to come.

Amazon's "Global Store improves the shopping experience by letting shoppers access goods in other countries with the same quality and prices," said Li. "But the commodities are less competitive in the price-sensitive Chinese market."

Executives from several e-commerce companies that offer foreign products to Chinese consumers said they are determined to stay in this imported-products niche and compete head-on with Amazon China. So intent are they to hold – and if possible increase – market share that they're willing to accept short-term losses in hopes of securing long-term growth, the executives said.

Offering online shoppers a "good experience" is of course important, Li said. But unless Amazon China starts rolling out promotions and regular discounts like its rivals, he said, the company find it hard to win a larger share of the market.

In fact, Li warned, Amazon may even eventually find itself marginalized.

"Amazon might become the No. 1 player for cross-border e-commerce in China," Li said. "But it might end up in third or fourth place" overall in the online retail market.

Chinese consumers already have the power to choose from among several e-commerce sites when shopping for foreign products. There may be even more – and more competitive – choices in the future.

Since 2014, several e-commerce companies, including Alibaba and JD.com, have launched their own versions of the Amazon China Global Store – and many are calling the sales of foreign products their next engine for business growth.