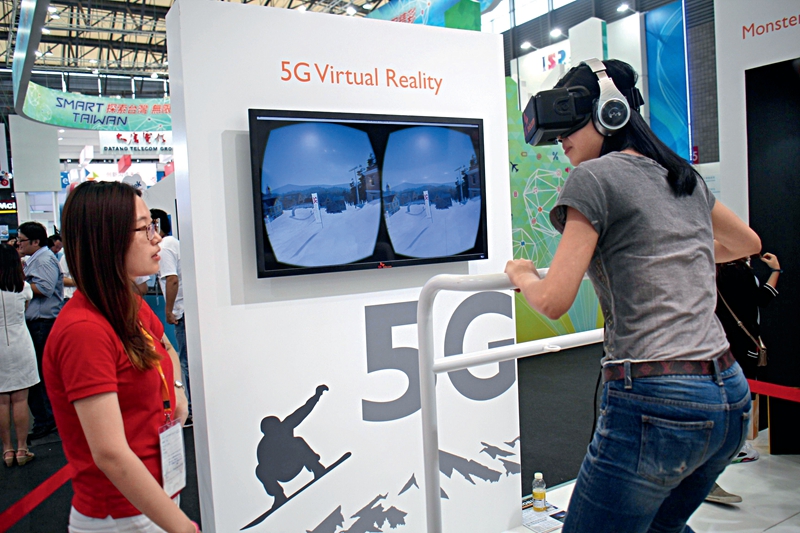 (Beijing) – The next generation of wireless telecom technology is on a fast track that could bring speedier, more efficient Internet connections to the world's mobile devices much sooner than industry watchers expected.

And if Chinese telecom companies, devise manufacturers and government officials have their way, China will play a leading role in setting global standards for 5G technology before it starts replacing 4G services.

Some of the world's telecoms could start upgrading to 5G as soon as 2018.

The new technology has been hailed by the Chinese government as the future backbone for the nation's telecom and data processing industries. The Ministry of Industry and Information Technology's (MIIT) director of telecommunication development, Wen Ku, said in September that infrastructure based on 5G will not only improve everyday mobile services but also support the nation's development of the Internet of things, a network that links physical items and the Net.

Tan Yanming, a telecom analyst with Detecon Consulting Ltd., a German consultancy, said China has already secured a stronger role in the 5G process than it had during the run-up to 4G.

But before China can be named a world leader, Cai said, its companies will have to prove they've contributed to advancing key technologies and improving the domestic telecom sector. Moreover, Tan said, the government will have to curtail market intervention so that firms and industry associations can take a front seat in telecom development.

Yet these goals may be within reach, as Chinese telecom companies previously proved their mettle by catching up to global rivals in the 4G technology development process. Dong Xiaolu, a researcher in MIIT's technology department, said telecoms such as China Mobile are poised to support China's leading role in the 5G era.

China's initiative got a major boost in June when the Geneva-based International Telecommunication Union (ITU) used the Chinese government's recommendation to call 5G technology "IMT-2020." As a result, ITU researchers and policymakers will refer to the technology by that name, a decision that "recognizes our efforts," Dong said.

The research behind the current march to global adoption of 5G technology started in 2012 among the world's leading telecom companies, and Chinese firms joined the effort a year later. Then in June 2014, the ITU announced that 5G systems would be ready for testing by late 2017.

That same year, ITU officials also started assessing standards for 5G service, with the goal of having standards complete and in place in time for commercial release in late 2020. These standards were submitted by telecom operators in China, the United States, South Korea and other countries.

The ITU's timetable calls for 5G standards to be finalized no earlier than 2019.

Dong said Chinese wireless sector players have been strong in the area of basic 5G research but are weaker than non-Chinese firms such as computer chip maker Qualcomm Inc. in certain areas of technological development.

Wang said there is no consensus among international researchers on what should constitute a 5G network's core technology. Different companies are working on various plans, and the agreement on standards will be reached after negotiations among major global players.

The standards that are eventually adopted by the world's telecoms will make it possible for a 5G subscriber to travel from one country to another without changing SIM cards or having to face service interruptions, said Su Xin, a DT Mobile researcher. Su added that 5G technology will be more compatible with different devices than 4G.

Other telecom experts have said 5G's most visible advantage is its data transfer speed. The technology will, in theory, be able to transfer up to 10 gigabits per second, compared to a top speed of 100 megabits per second through 4G, meaning a high-resolution movie can be downloaded in seconds.

Researchers at telecom companies in South Korea and China have proposed setting an average 5G network speed at 1 gigabyte per second, up from an average 10 megabytes on a 4G network. China Mobile wants its future 5G network to offer up to 20 megabytes per second by 2020.

Upgrading to 5G from 4G will be a greater leap than advances from 1G to 4G, steps that focused on raising data transfer speeds, said DT Mobile's Cai. One reason is that 5G networks will be designed to combine a variety of Internet-related technologies.

A researcher at Huawei Technologies Co. Ltd., another Chinese device manufacturer, predicted that 5G technology will help overcome business and industrial problems that 4G cannot. "5G means a technological revolution as well as a business revolution," said the researcher, who asked not to be named.

Telecoms worldwide, including in China, have spent heavily on 5G research. More than 500 Huawei researchers have been working on the technology since 2009, and the firm is in the third year of a six-year, US$ 600 million 5G research and development program.

In July, Huawei CEO Hu Houkun said the company planned to finish drafting its 5G standards by the end of 2018 and start commercial use in 2020.

Companies are also preparing to put their research findings to work. China's largest telecom, China Mobile, is expected to launch 5G pilot services through special deals with industrial partners before 2016 and launch pilot services for the general public starting in 2019, said Huang Yuhong, deputy director of the company's research body.

Executives at the United States' largest telecom operator, Verizon Communications, said in September that 5G service tests would be launched within 12 months and be ready for commercial use in 2017. South Korea's SK Telecom said it plans to launch 5G services on a pilot basis before 2018.

So Chinese companies are not alone in the race to develop, roll out and set standards for 5G technology. But Wang said the Chinese can have a major say in any of these areas based on their ability to develop standards, products and markets. "It depends on your influence," he said.

Chinese companies are doing what they can to stand up to the task.

ZTE said it has already incorporated some aspects of 5G technology into its existing 4G network. In March, the company released design of a mobile network base station based on 5G technology. And Huawei is already rolling out 5G devices. In July, the company unveiled its first 5G smartphone at an exhibition in Shanghai.