China Will Be Key to Future of G-20, Ex-Canadian PM Paul Martin Says 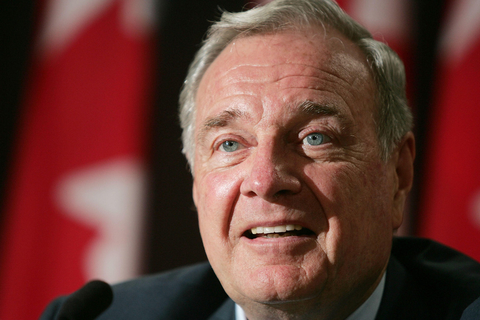 (Beijing) – In the late 1990s, the world seemed to be lurching from one economic crisis to another. But only a handful of developed countries, known as the Group of Seven, seemed to have the last word on what everyone else should do about it.

One man thought there was something wrong with that: Paul Martin, the former prime minister of Canada, who is widely credited as the architect of the Group of 20.

Established in 1999, the grouping serves as a forum for world economic leaders, such as finance ministers and central bank governors, from both developed and developing countries to discuss pressing issues.

This year's G-20 summit will be held in Antalya, Turkey, from November 15 to 16. China will take over the G-20 presidency on December 1 and host the summit for the first time, in the major eastern city of Hangzhou, in November next year.

Though retired now, Martin still remains influential in meetings related to the G-20. He is also quick to point out the bloc's successes, arguing that a summit in London in 2009, in the wake of the global financial crisis, prevented "an awful a lot of trade protectionism and the 2008 recession would have been even worse than it was."

In an interview with Caixin, Martin also expressed high hopes for the future of the grouping, especially when China takes on a bigger role.

"The Chinese summit could well be the rebirth of not just of the G-20, but the rebirth of real cooperation, if it recognizes the necessity of properly funding, of strengthening the great international institutions," he said.

The following are excerpts of Caixin's interview with Martin.

Caixin: You are often called "the father of the G-20." So how did you start it all?

Paul Martin: In the late 1990s, there was the Asian crisis, the Russian default on its debt and a very large devaluation in Brazil. This was really the worst financial crisis since the end of the Second World War. When G-7 finance ministers decided what these nations should do, the Asian countries rejected us. At that point, it became very clear that the G-7 was not going to dominate the world in economic thought. Plus, China and India were not at the table. So I told Larry Summers, the U.S. secretary of treasure at the time, that we have to create an organization. He agreed. We sat down and picked the nations and this is how the G20 was created.

It first started with the finance ministers, but it became very evident that it should be elevated to the leaders' level. When I became prime minister, the first person I talked to was the then premier of China, Wen Jiabao, and he was a great supporter. But we had all of the countries except the U.S. They didn't say no; they just wouldn't say yes. Ultimately after the 2008 financial crisis, President (George W.) Bush acceded to it.

There are high expectations for what the G-20 should achieve. But there are also voices that question whether it has actually done anything.

The London summit was a huge success. If it had not been for it, those countries would have been engaged in awful a lot of trade protectionism, and the 2008 recession would have been even worse than it was. Secondly, the G-20 – out of the ashes of the financial stability forum – attempted to look at financial regulation, which wasn't very successful. They created the Financial Stability Board (FSB), which was really one of the great innovations of the last generation. But you're right. Since then the G-20 has had successes but nothing like those which got it started. Multilateral institutions like the FSB have to be beefed up by the G-20. It should become a treaty amongst countries, and it should be given the power to call countries to account if their financial sector regulation is not sufficient.

What kind of contributions can China make at the 2016 Hangzhou summit?

The Chinese summit could be a tremendous success. For one, it should deal with the handshake agreements between the presidents of China and of the United States on climate change. There will be a lot of details to work out, and you have the year ahead leading to the summit to do that. And the fact that a powerful nation like China is holding the summit is a great impetus for success.

Second, and equally important, the G-20, unlike the G-7, is not a series of nations with the same kinds of economies and the same kinds of political system. This means it needs the great multilateral institutions to bind their decisions together. But these institutions are facing difficulty right now. For instance, due to the reluctance of the U.S. Congress to go along with the quota and governance reforms, the International Monetary Fund (IMF) is in some trouble. Some have also said the IMF's treatment of nations during the Asian crisis was harsher compared to its treatment of European nations which got into some trouble later on. There can only be one monetary anchor – the IMF – and it cannot be subjected to the whim of any individual country. For it to not reform would be a fundamental issue. That reformation will only take place if the G-20 acts.

Should the G-20 purely focus on economic affairs or should it concern itself with other matters of global significance?

The purpose of the G-20 is not only to deal with financial institutions. In the Mediterranean, in Europe, or in the Andaman Sea, we have just witnessed some of the greatest human tragedies. Hundreds of thousands of refugees were escaping with nowhere to go. The UN commissioner for refugees said it was broke. This means that young children are going to be condemned to refugee camps, where there is no education, only ill health. Think of what we're saying, the morality of that.

When the Ebola crisis occurred in Africa, Doctors Without Borders was in there ahead of the WHO. What in the heaven's name is happening when an organization like the WHO does not have the money to contain disease? Dr. Margaret Chan, who is the head of the WHO, said we're about to face an onslaught of infectious diseases we thought had been dealt with. And she doesn't have the money to deal with it. You're right to talk to me about the financial problems. But you know financial problems don't mean much if you're a young person struck with some infectious disease and there is nobody there to help you. Financial problems don't mean a lot to some refugee who has come out of a war-torn Syria and there is no place for that person to land.